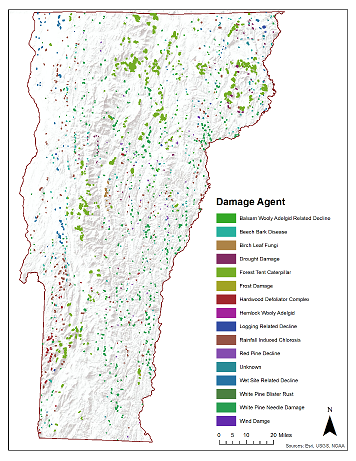 Figure 4. Locations of 2017 mapped forest disturbance from Vermont aerial detection surveys. Disturbance polygons were increased in size for visibility. Only those damage agents with the highest occurrence are shown.

Damage to trees caused by insects, disease, animals, and weather are a natural and common occurrence in Vermont’s forests. Such disturbances can result in changes to biodiversity and species composition, and allow for cycling of nutrients from trees to soil, but can also negatively affect timber quality and other important ecosystem services. There is also concern that climate change and further introduction of non-native pests and pathogens may alter disturbance patterns in the future.

The Data Insect and Disease Surveys (IDS) (formerly, Aerial Detection Surveys, ADS) have been used to map the cause and extent of forest disturbances in Vermont for nearly 50 years.

Statewide annual sketch-mapping survey data are collected by Vermont Department of Forests, Parks, and Recreation (VT FPR), and the US Forest Service over the Green Mountain National Forest and other federal lands. The US Forest Service Forest Health Monitoring Program sets survey methods and standards for IDS across the US.

In most years, assessments cover the entire state (>2.5 million hectares). Mapped polygons include the disturbance cause, type, size, and severity, which are confirmed with ground assessments. Causal agents of disturbance can range from insects and disease, to weather events (ice, wind, and frost), wild animals, and humans. Surveys are a cost-effective and vital tool for detecting emerging forest health issues and tracking trends, but are not comprehensive of all forest damage. 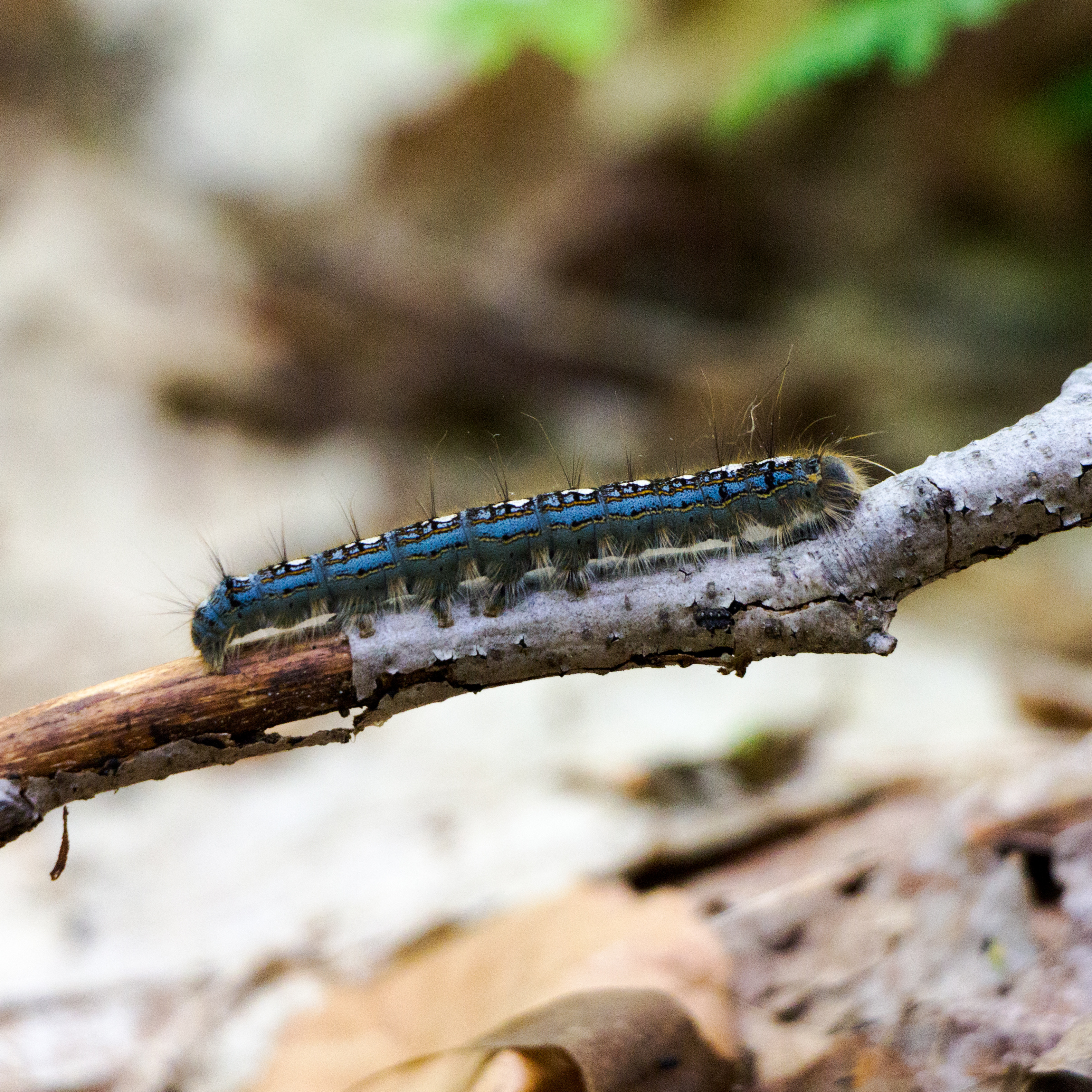 2017 marked the second year of a forest tent caterpillar (Malacosoma disstria) outbreak, with 24,515 ha of damage mapped during the season, an increase over the 9,197 ha mapped in 2016. Outbreaks result in defoliation of hardwood trees and usually last several years. White pine needle damage was the second most widespread damage, with 6,650 ha mapped (Figure 4), but this value represented only half the white pine needle damage area mapped in 2016. 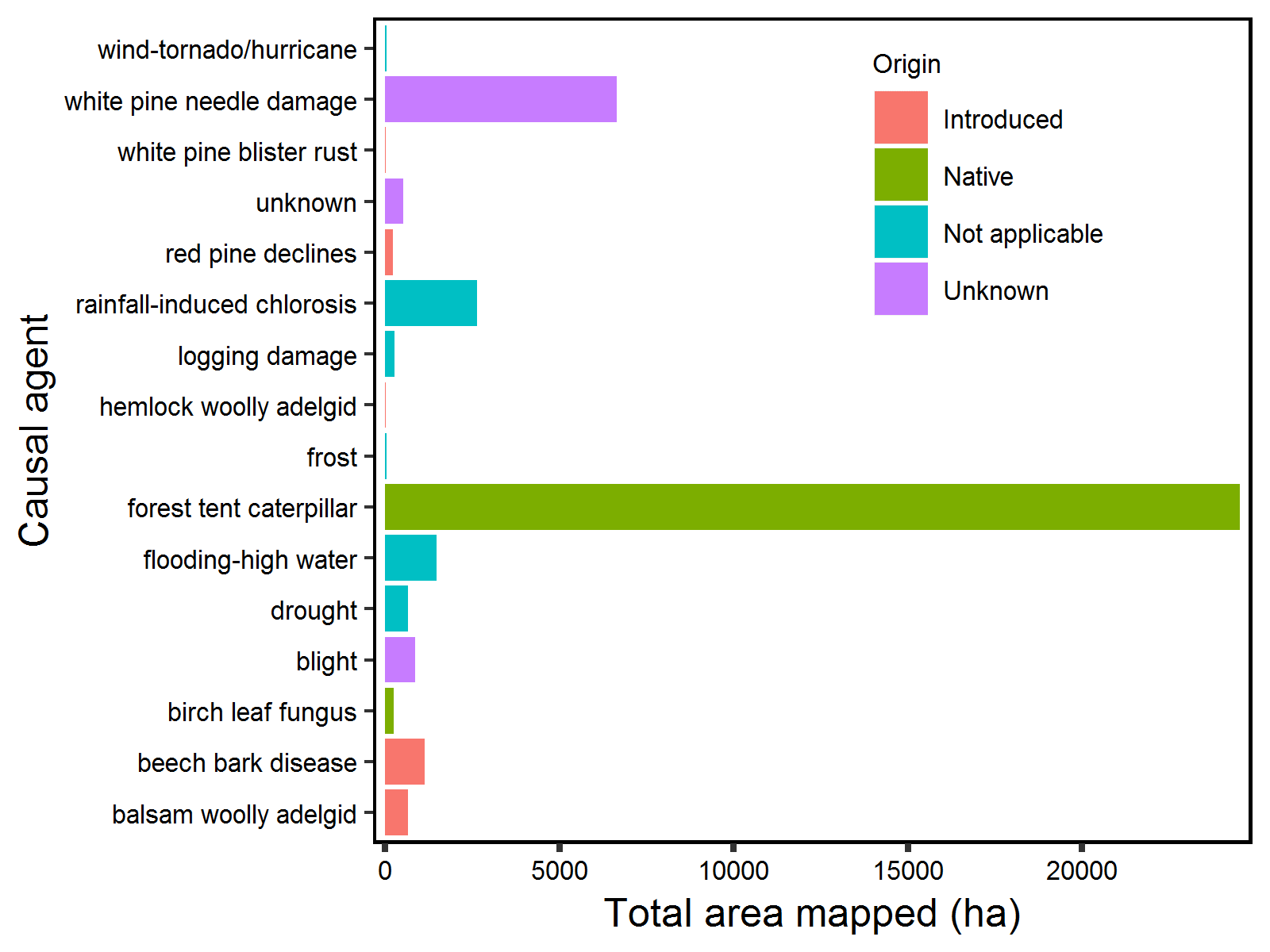 Figure 5. Area (in hectares) of mapped 2017 disturbance by causal agent according to Vermont aerial detection surveys. Color corresponds to the agent’s origin.

Rainfall-induced chlorosis was the third-most common damage type, resulting from the wetter-than-normal spring and early summer, largely affecting sugar maples. Symptoms attributed to drought were much less common than in 2016 (VT FPR 2017) Some regionally destructive, non-native pests, like gypsy moth (Lymantria dispar), browntail moth (Euproctis chrysorrhoea), and emerald ash borer (Agrilus planipennis), were not detected in Vermont in 2017 although they caused damage elsewhere in the northern Forest region (MA, ME, NH, NY, and VT).

More complete results of the 2017 Vermont ADS effort can be found in the 2017 report, Forest Insect and Disease Conditions in Vermont (VT FPR, 2017). 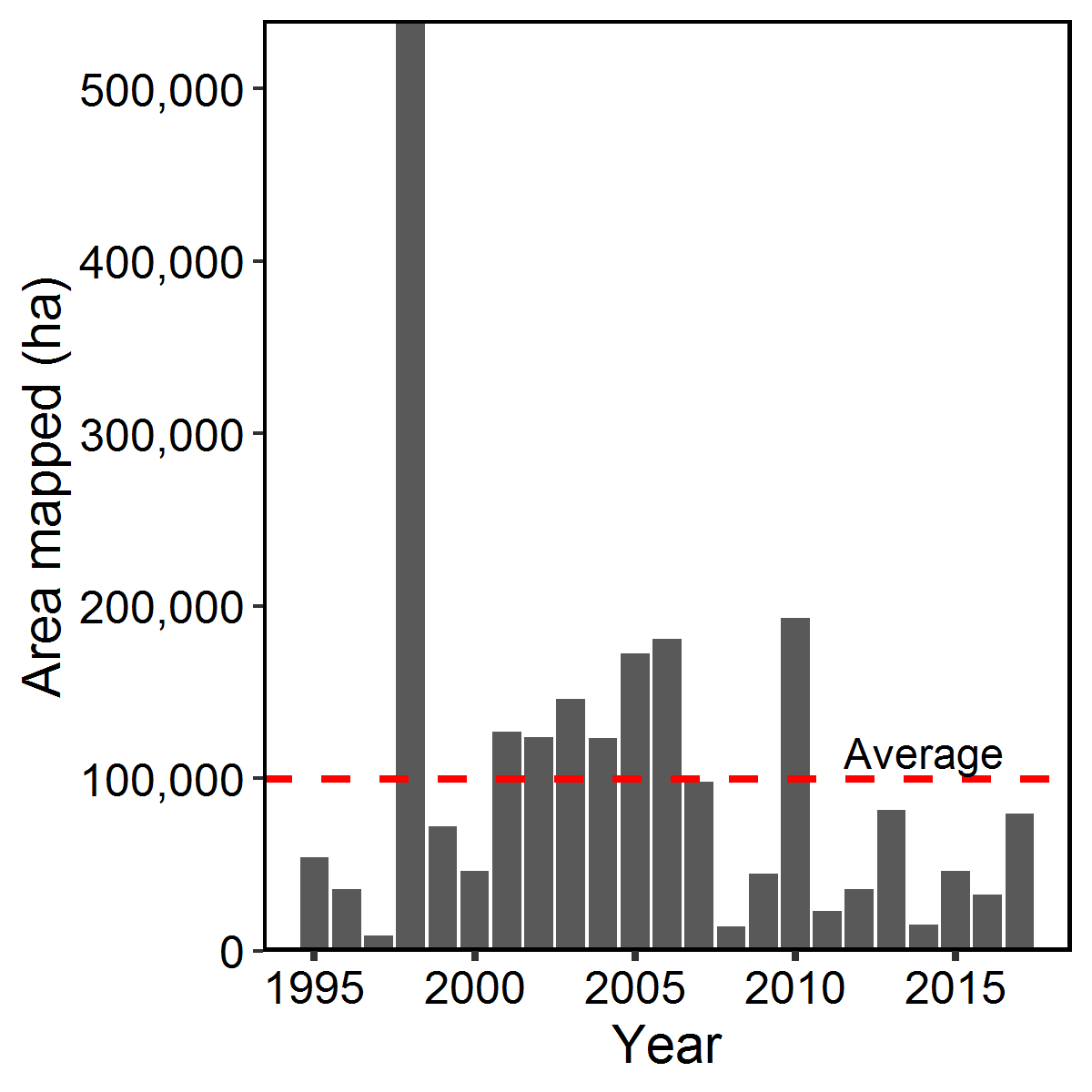 Summing all disturbances per year (1995-2017) reveals substantial year-to-year variability (Figure 6). This is partially due to shifting monitoring and assessment priorities year to year, but also depends on the nature of the disturbance. Several disturbances are episodic, particularly abiotic weather events (e.g., late spring frost events, drought) and many insect outbreaks. The year of the highest disturbance area occurred in 1998 with a severe ice storm that caused widespread damage to trees (381,843 ha). Only two agents have been detected every year in the 23-year period: beech bark disease and birch defoliator complex (Figure 7).

In total, 66 different damage agents have been mapped in Vermont since 1995. When the maximum extent of damage caused by specific damage agents is compared to number of years they were mapped, agents have varying impacts in the landscape (Figure 7). In general, insects and abiotic agents have had the largest effect on the region’s forests. The most damaging agents overall have been ice and snow damage (394,829 ha), birch defoliator complex (324, 807 ha) and forest tent caterpillar (301,715ha). 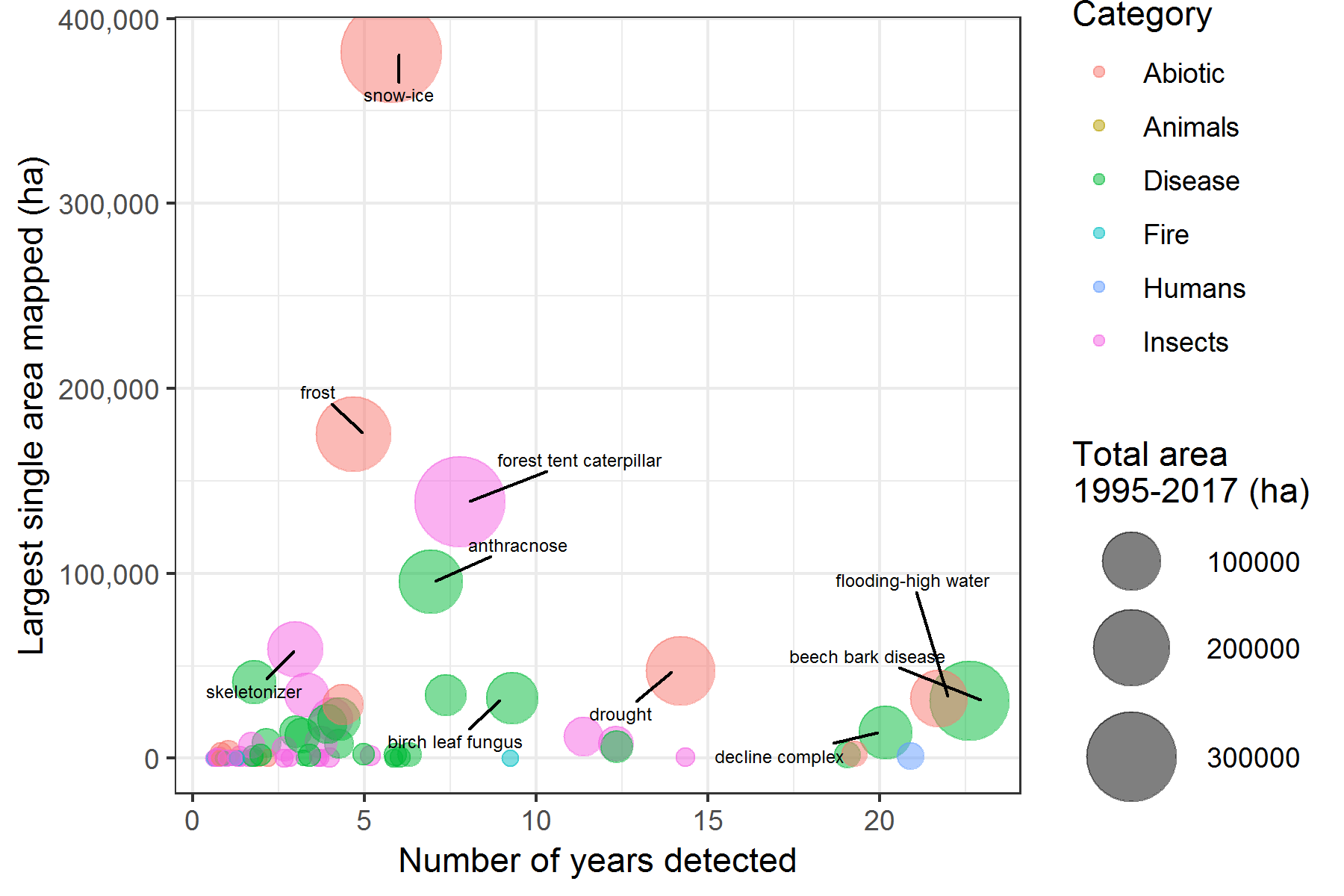 Figure 7. Mapped disturbance agents in aerial detection surveys from 1995-2017 plotted by the frequency (number of years detected) and largest single area mapped (ha; e.g., largest polygon) attributed to agent. Circle size corresponds to the total area recorded for that agent over the twenty-one-year period and color corresponds to the agent category. Only agents that have affected >50,000 ha are labeled for clarity.

Abiotic disturbance agents, like ice and frost events and drought, can indiscriminately affect trees regardless of species (although there can be reasons why specific species may be more harmed in abiotic events, due to branching structure, wood density, or habitat, for example) and as a result can cause widespread disturbance. Most other disturbance agents have only affected a small area of regional forestland. Only seven agents out of 66 have resulted in total damage greater than 100,000 ha in the 23-year period. Many tree diseases identified in the region have not caused large disturbance extents despite frequent occurrence (Figure 7). Of diseases, beech bark disease and anthracnose have resulted in the largest disturbance area. Forest fire is an infrequent event regionally, and when it does occur, the extent is small.

The annual rate of disturbance in Vermont is comparable to the rest of northern Forest region (3% of forestland/year). Many, if not all, of the disturbances affecting Vermont’s forests are regional issues. Disturbances do not know where state boundaries lie, and as a result pests and pathogens, as well as abiotic stressors, like hurricanes, ice, and drought can affect the whole northern Forest region.

As our climate continues to change, it is projected that extreme weather events will become more frequent, which may mean more storms, wind, ice, frost, or flood events. Elevated summer temperatures, along with changes to rainfall patterns, could lead to more severe and frequent droughts. Such abiotic events can cause large areas of damage to multiple tree species (Figure 7). It is only as we continue to monitor disturbances over time can we begin to understand the patterns of various types of events and how they may be changing.

Many invasive insects and diseases have been detected in Vermont, or in neighboring states. Overall, introduced pests and pathogens have caused much more disturbance to the region’s forests than those of native origin, and we could see widespread declines of specific species, such as ash (Fraxinus spp.) with the continued spread of emerald ash borer. The high species diversity in many of Vermont’s forest stands and continued vigilant monitoring may be helping to mitigate widespread issues and to identify problems before they become widespread. 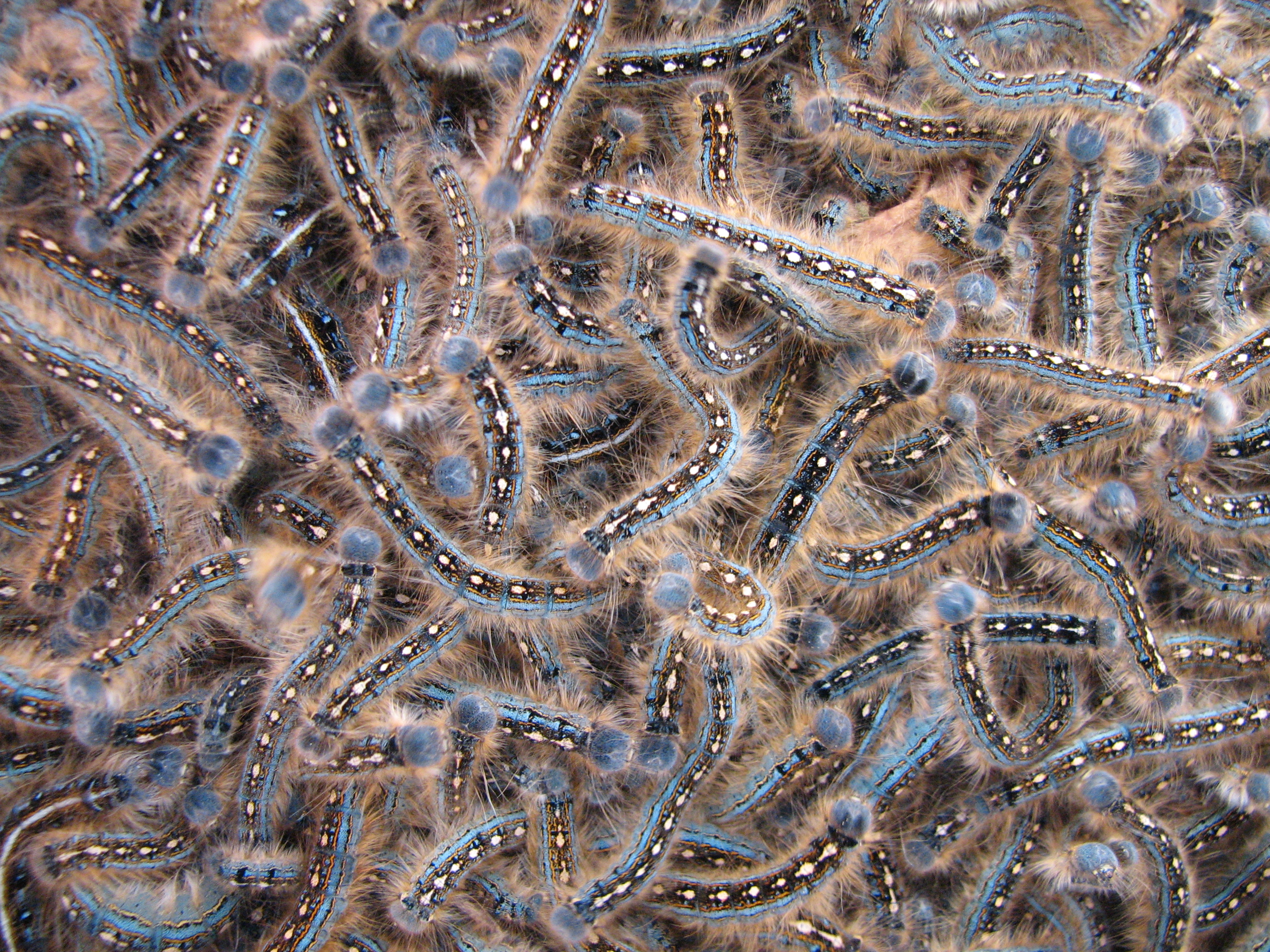 In 2017, there was less disturbance than the Vermont average (1995-2017). The most damaging disturbance agents in 2017 were forest tent caterpillar, white pine needle damage, and rainfall-induced chlorosis.