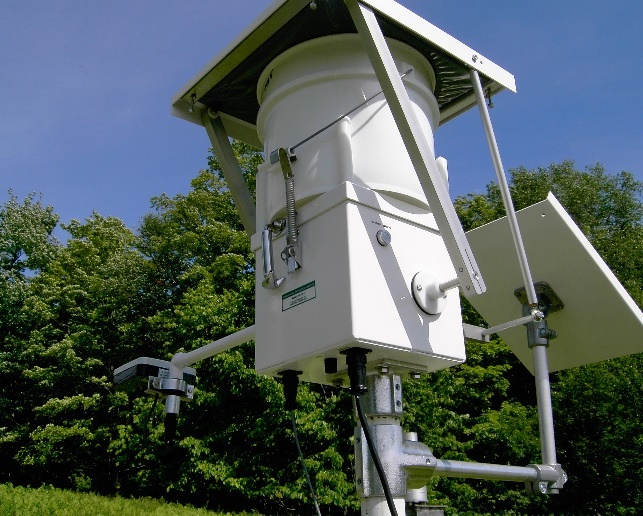 Automated Precipitation Collector at the FEMC Air Quality Site in Underhill. Sampling at this site started in 1984.

The ecological consequences of atmospheric acid deposition have been well studied in the Northeast. Through these investigations, acid rain has led to the decline of red spruce in the 1970s and 80s, the leaching loss of calcium and other cations from soil, and the acidification of lakes and streams. Two measures of acid deposition are sulfate (SO42-) and nitrate (NO3-); when emitted as air pollutants, these molecules can form acids through reactions with water in the atmosphere, creating what we know as ‘acid rain’. Recognizing this serious environmental threat, regulations were enacted to control emissions of sulfur and nitrogen oxides, which react in the atmosphere to produce acidic compounds; as a result, acidic deposition has declined and ecosystem recovery is underway.

National Atmospheric Deposition Program (NADP) has been monitoring precipitation chemistry in the US since 1978 through the National Trends Network (NTN) program. The 250 national NTN sites collect data on the amounts, trends, and geographic distributions of acids, nutrients, and base cations in precipitation.

Figure 9. Mean annual deposition of nitrate (NO3), sulfate (SO4), and pH displayed with quantile box plots. The most recent year’s measurements (2017) are indicated in red, and shades of blue correspond to the year, with lighter values corresponding to more recent data. Solid horizontal line indicates the long-term mean; any points outside vertical bars at top and bottom of boxes show values that are statistically outside of the range for that parameter.

The Forest Ecosystem Monitoring Cooperative has conducted atmospheric deposition monitoring for over thirty years at the Proctor Maple Research Center in Underhill and near Lye Brook Wilderness Area in southern Vermont. The Underhill NADP/NTN site has been a cornerstone of FEMC monitoring and research, providing key information on the sources of pollution, trends in deposition rates and how this influences forested ecosystems. The continental scale of NTN sites reveals spatial and temporal trends in acid deposition in Vermont and the Northeast and allows comparison with other regions of the U.S. Today, this information is necessary to understand how air quality policies have ameliorated acid deposition across the region, and to inform future policy and management decisions to sustain the health of the region’s forested ecosystems.

For all three metrics of acid deposition (NO3, SO4, pH), 2017 continued the trend of reduced pollution concentrations over historical measurements (Figure 9).

While mean deposition of NO3 in 2017 was not the lowest value observed in the record (Figure 9), it was the third lowest at 10.64 µeq/L, and was a considerable decline from the record high of 28.13 µeq/L in 1985. Further, for every year in the most recent decade (2006 on), precipitation contained the lowest measured concentrations of NO3.

In 2017, we saw the lowest concentration of SO4 in the record (6.43 µeq/L), continuing a four-year streak of record lows. This is a dramatic decline from the historical high of 48.20 µeq/L in 1982. For the second year in a row, deposition of SO4 fell below that of NO3.

The average pH was the second highest on record at 5.13, which indicates that precipitation in the form of rain, snow, or ice is continuing to be less acidic when compared to historic records. While the pH has increased considerably from the record’s low of 4.32 in 1989, “unpolluted” rain typically has a pH of 5.6. Therefore, there is still room for continued improvement in lowering the acidic of precipitation. As pH is a logarithmic scale, this increase represents a roughly fivefold improvement in precipitation acidity.

In the early years of acid rain monitoring in Vermont, SO4 accounted for about 66% of the acidity in precipitation, while NO3 contributed the other 33%. According to the U.S. EPA National Emissions Inventory 2014 Report V2, national emissions of the precursor pollutants of SO4 and NO3 have decreased substantially since 1990 levels. Nationally, sulfur dioxide (SO2) emissions have decreased by 88% since 1990, while emissions of nitrogen oxides have decreased by 58%. While the stress imposed by sulfate deposition has been greatly reduced, it is unclear how the continued deposition of nitrate will impact forested ecosystems.

Since precipitation chemistry was first measured in Vermont, rain has become less acidified (Figure 10). These changes reflect declines in sulfur- and nitrogen-based emissions due to the Clean Air Act (1977) and subsequent amendments (1990). Sulfate deposition has fallen from nearly 50 µeq/L to less than 10 µeq/L (Figure 10). 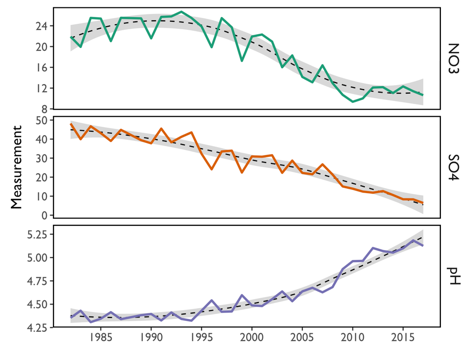 More modest changes have been measured for nitrate deposition. This is primarily due to the relative difficulty of removing nitrogen compounds from flue gases and their diffuse pollution sources such as motor vehicle exhaust and agricultural activities. Sulfuric emissions have been easier to control through regulation of emissions from the burning of coal, natural gas, and other fossil fuels, including the implementation of low sulfur fuel oil standards for heating oil.

Looking forward, it is likely that reductions in SO4 may continue (Figure 10), along with resultant decreases in precipitation acidity. However, it appears that reductions in NO3 concentrations may have plateaued. Because nitrogenous pollution primarily comes from diffuse sources such as automobile exhaust, fertilizer use, and confinement farming such as feedlots and poultry operations in agricultural regions, continued reductions may require additional legislative or regulatory action. 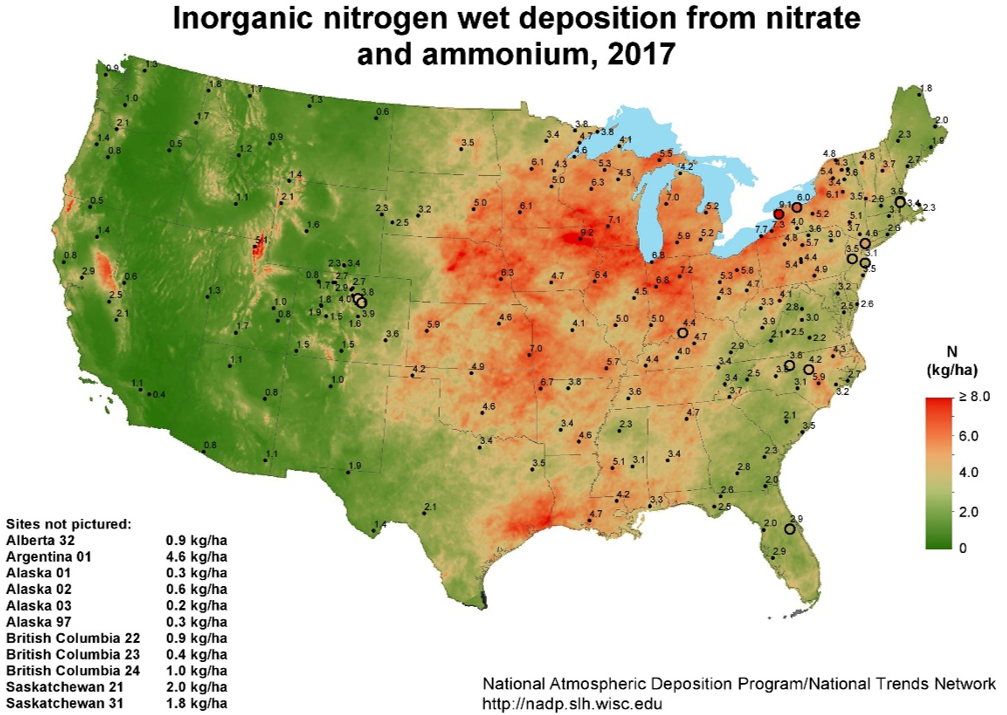 Figure 11. Spatial distribution of total inorganic nitrogen wet deposition from nitrate and ammonium (kg/ha) across the continental US in 2017. Source: NADP

Vermont is in relatively good shape compared to nitrogen pollution loads nationwide (Figure 11). However, forests along the spine of the Green Mountains continue to be at risk from additional acidic inputs due to more frequent exposure to acid mist in clouds, higher amounts of precipitation, and relatively shallow acidic soils. As nitrogen becomes a more important constituent of acid deposition, monitoring networks and modelers are combining resources to better understand the spatial and temporal patterns of nitrogen deposition and its impacts on terrestrial and aquatic ecosystems.

Similar trends in reduced acidity of precipitation has been seen elsewhere in the region, although western portions of New York continue to receive elevated deposition (Figure 11). Many areas in the Midwest US have been experiencing very high levels of nitrogen deposition; these regions are characterized by developed manufacturing industries. As a result, continued declines in nitrate deposition may require additional regulations. 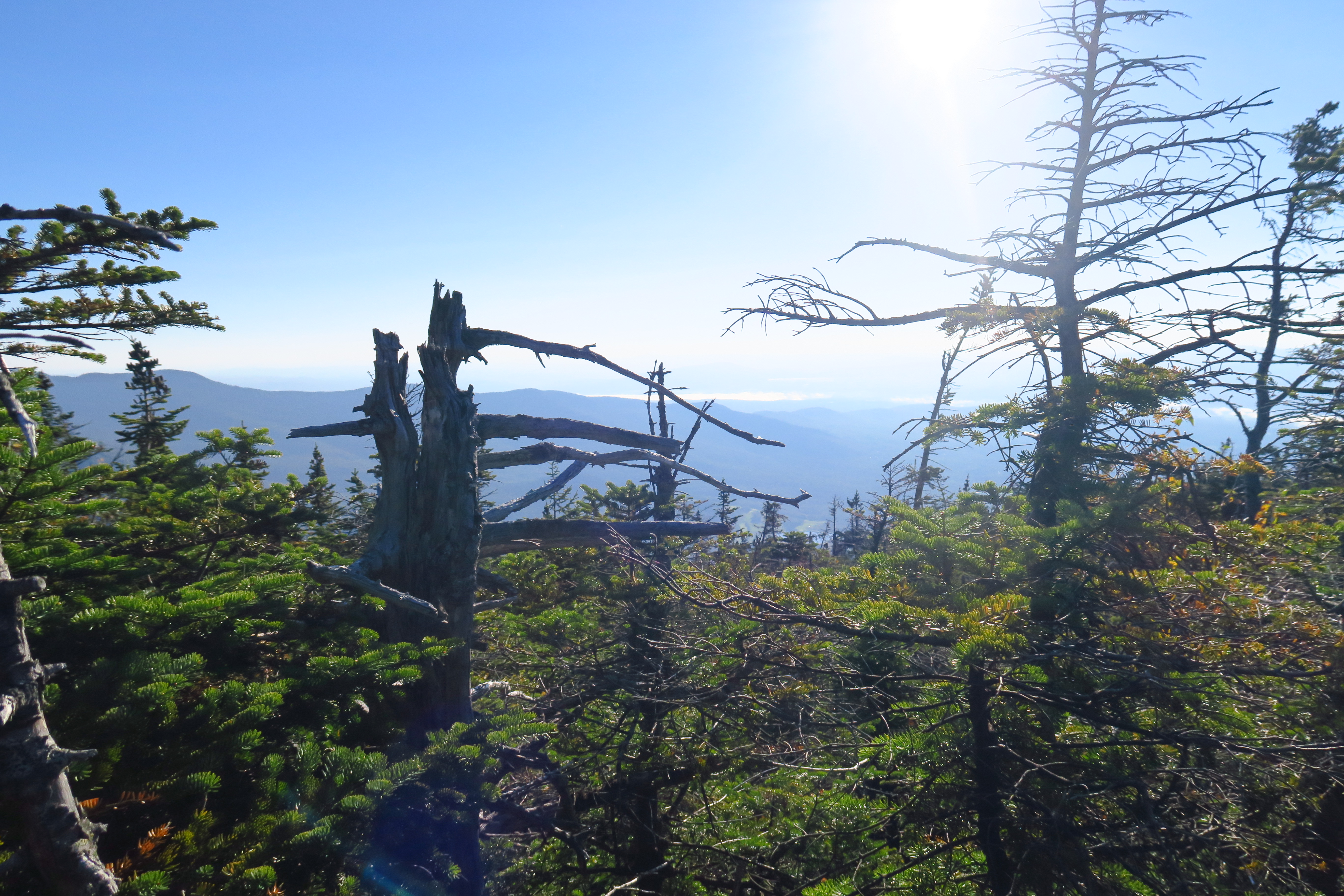 Acid deposition continued to decline in 2017. The average pH of precipitation was 5.13, well above the historical low. Nitrate deposition may have plateaued and should continue to be monitored.