Damage to trees caused by insects, disease, animals, and weather are a natural and common occurrence in the region’s forests. Such disturbances can result in changes to biodiversity and species composition, and allow for cycling of nutrients from trees to soil. However, forest disturbances can also negatively affect timber quality, damage infrastructure, and impact important ecosystem services. There is concern that climate change and continued introduction of non-native insects and diseases could alter the frequency and severity of forest disturbances.

Insect and Disease Surveys (IDS) (formerly, Aerial Detection Surveys, ADS) have been used to map the cause and extent of forest disturbances in the US for many years. Annual sketch-mapping surveys are collected by the individual state agencies, and by the US Forest Service on federal lands, via fixed-wing airplane by trained technicians. The US Forest Service Forest Health Monitoring Program sets survey methods and standards. Mapped polygons include information on the disturbance cause, type, size, and severity, and are confirmed with ground assessments. Causal agents of disturbance can range from insects and disease, to weather events, wild animals, and humans. Surveys are a cost-effective and vital tool for detecting emerging forest health issues and tracking trends. However, surveys are not comprehensive of all forest damage and cannot capture subtle or patchy disturbance or light decline.

We examined forest disturbances via IDS for the five states in the northeastern region (Massachusetts, Maine, New Hampshire, New York, and Vermont). Please note that survey scope and coverage are not uniform between the five states; therefore, it can appear that some states have more disturbances than others, which is a result of differing priorities and methods implements during surveys. While all these states have data going back in time to different years, 1997 was the first year in which methods were largely standardized across the region, so we use that as the first year in any trend analysis. 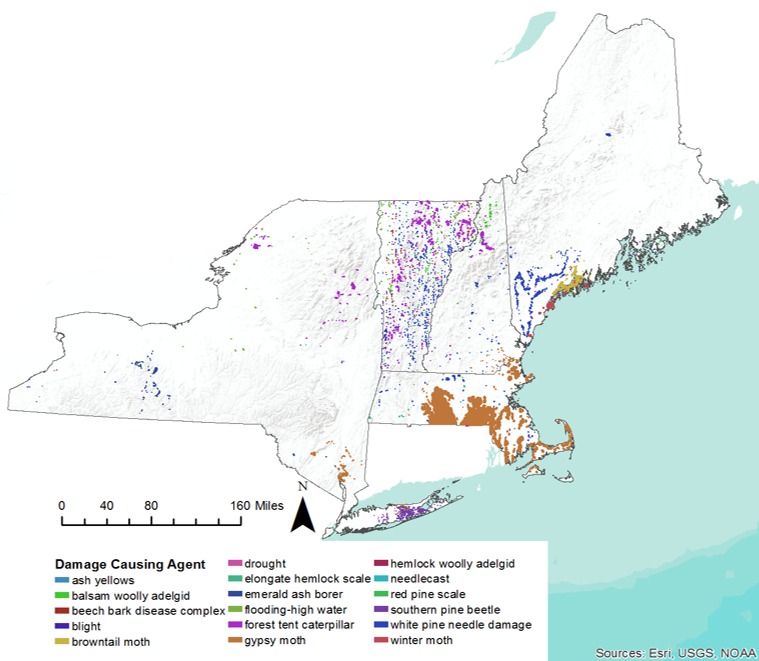 Figure 7. Locations of select forest disturbance agents in 2017 from region-wide Insect and Disease Surveys. Only agents with considerable disturbance area are shown. Note that disturbance polygons were increased in size for visibility, but also states have had differing methods for quantifying disturbance.

As in 2016, we saw substantial damage caused by introduced (non-native) pests. In 2017, introduced insects and diseases caused nearly 10 times more disturbance (481,187 ha) compared to those of native origin (49,067 ha, Figure 8), which is an increase from the previous year.

Gypsy moth (Lymantria dispar) was mapped on the most area of all disturbance agents -- 437,349 ha (1,080,712 ac) of forestland -- primarily in Massachusetts (Figure 7). While this is a considerable increase from 2016 (150,510 ha), it is possible that some of this change is due to shifts in the way disturbance polygons are mapped with the latest technology. For more information on gypsy moth defoliation in Massachusetts, see the report by MA Department of Conservation and Recreation (2018).

Damage attributed to another invasive insect, browntail moth (Euproctis chrysorrhoea), was mapped on 21,031 ha (51,968 ac) of forestland, which was a slight decrease from the previous year (28,329 ha) (Figure 8) and may suggest that this outbreak, which is primary situated in southern Maine, may be waning.

However, some native insects also caused considerable disturbance (Figure 8). Forest tent caterpillar (Malacosoma disstria) was the second most damaging agent in 2017, mapped on 41,641 ha (102,896 ac), marking the second year of an outbreak. The majority of this disturbance occurred in Vermont (Figure 7). 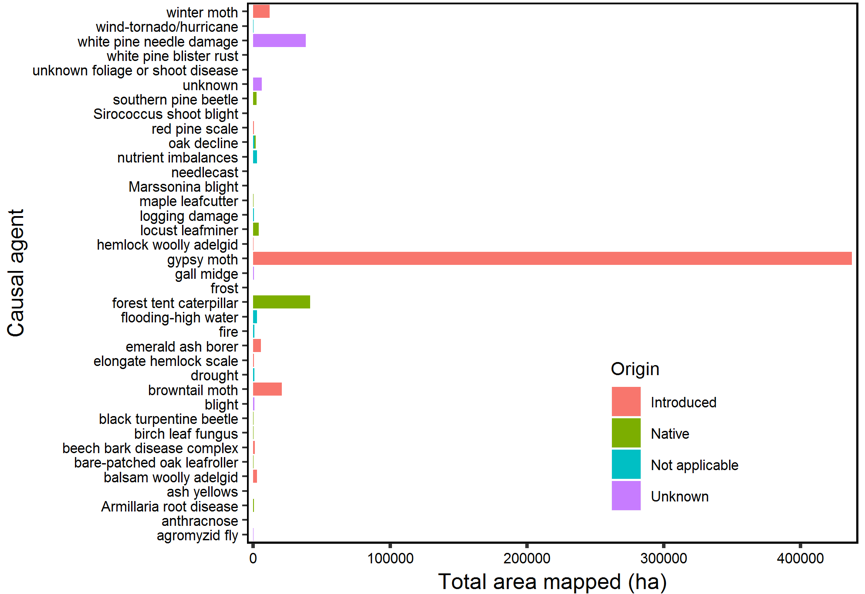 Figure 8. Total mapped disturbance (in hectares) by causal agent from 2017 Insect and Disease Surveys in the Northeast. Color of bar corresponds to the origin of the agent.

A positive finding was that the area mapped with white pine needle damage area declined from 2016 (38,375 ha in 2017, 71,364 ha in 2016). White pine needle damage has been attributed to a complex of fungal pathogens, which are dependent on moisture availability. The dry conditions in spring 2016 may have reduced disease severity in 2017. 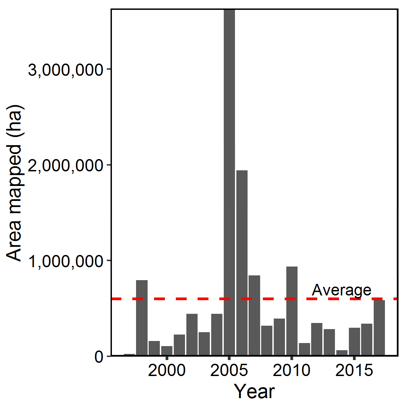 Figure 9. Total area mapped as disturbed according to Insect and Disease Surveys (grey bars; hectares) by year in the Northeast. The red dashed line indicates the average disturbance over the entire timeframe (1997-2017).

Total disturbance mapped per year (1997-2017) shows substantial year-to-year variability in total forest damages (Figure 9). This is partially to do with divergent forest health priorities and differing amount of forestland surveyed between the five states. In addition, several causes of forest disturbances are episodic, like weather events (e.g., late spring frost events, drought) and many insect outbreaks, (e.g., balsam wooly adelgid, Adelges piceae). The year of the greatest disturbance occurred in 2005 during an outbreak of the non-native insect, balsam wooly adelgid that affected 1,860,334 ha.

Region wide, around 200 damage agents have been mapped during Insect and Disease Surveys since 1997. Only three agents have been detected regionally every year in the 21-year period: gypsy moth, flooding/high water damage, and beech bark disease (a complex between Cryptococcus fagisuga scale and Neonectria fungi [N. faginata and N. ditissima]; Figure 10). When the maximum extent of damage caused by specific damage agents is compared to number of years they were mapped, agents have varying impacts in the landscape (Figure 10). In general, insects and abiotic agents have had the largest effect on the region’s forests. The three most damaging agents overall have all been insects: balsam wooly adelgid (3,150,140 ha), forest tent caterpillar (1,576,846 ha), and skeletonizer (1,107,655 ha; species unknown).

Only 13 agents have resulted in total damage greater than 100,000 ha in the 21-year period (Figure 10). Many tree diseases identified in the region have not caused large disturbance extents despite frequent occurrence. Of diseases, beech bark disease and anthracnose (Gnomonia spp.) have resulted in the largest disturbance area, and white pine needle damage is becoming more widespread (Figure 10).

The large effect of introduced insects and diseases over the 21-year period is cause for concern: introduced agents affected over twice the amount of forestland (4,938,800 ha) compared to those of native origin (2,151,235 ha). However, as new pests and pathogens emerge, often the origins of agents are unknown; agents of unknown origin have caused substantial disturbance overall (3,328,415 ha). These results demonstrate the destructive nature of introduced pests and support the need for continued monitoring. 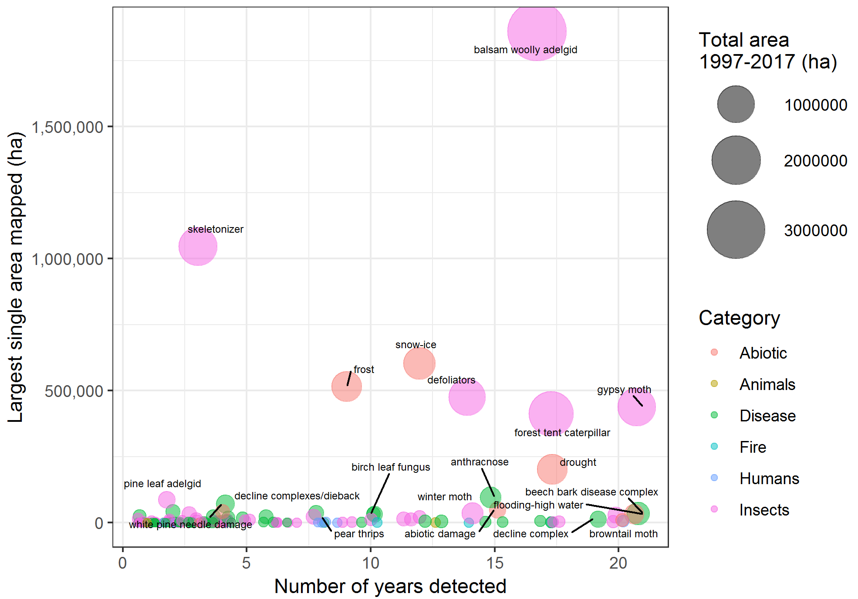 Figure 10. Mapped disturbance agents from region-wide Insect and Disease Surveys (1997-2017) plotted by the frequency (number of years detected) and largest single area mapped (ha; e.g., largest single polygon identified for that agent). Circle size corresponds to the total area recorded for that agent over the 21-year period and color corresponds to the agent category. Only agents that have affected >50,000 ha in total are labeled for clarity.

IDS data provides the longest region-wide annual record of forest disturbances. Over the past 21 years, relatively low levels of total forest disturbance have been mapped, with most agents causing small damage extents and minor total damage.

Disturbance agents that lead to repeated and extensive damage are more likely to have significant impacts on forest health and productivity. Many biotic agents tend to be chronic or episodic, while abiotic events are often less predictable, yet can result in large disturbed areas. As our climate continues to change, it is projected that extreme weather events will become more frequent, which may mean more storms, wind, ice, frost, or flood events. Elevated summer temperatures, along with changes to rainfall patterns, could lead to more severe and frequent droughts. Such abiotic events can cause large areas of damage to multiple tree species (Figure 10). It is only as we continue to monitor disturbances over time can we begin to understand the patterns of various types of events and how they may be changing.

Many invasive insects and diseases have been detected in the region, or have been detected nearby. These pests and pathogens have caused much more disturbance to the region’s forests than those of native origin, and we could see widespread declines of specific species, such as ash (Fraxinus spp.) with the continued spread of emerald ash borer. The good news is that we are not seeing increases in total disturbance over time. The high species diversity in many forest stands and continued vigilant monitoring may be helping to mitigate widespread issues and to identify problems before they become widespread. 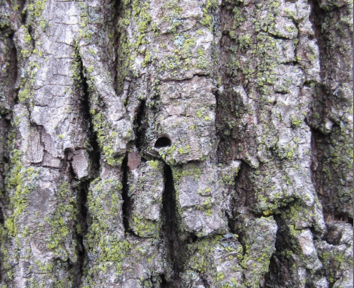 In 2017, there was an increase in forest disturbance compared to 2016, primarily driven by more gypsy moth damage. There was also 10 times more damage attributed to invasive insects and diseases compared to those of native origin. Continued monitoring is essential to examine trends and detect novel agents.