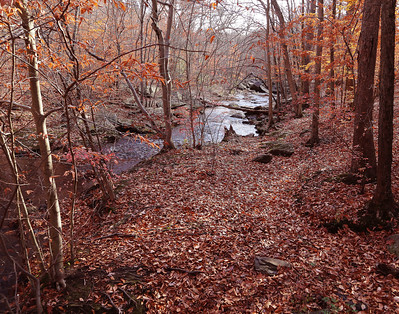 Four permanent plots were established during 1926-27 in regrowth hardwood forests in central Connecticut. Three plots, Cox, Cabin, and Reeves are in the Meshomasic State Forest, Portland. The fourth plot, Turkey Hill, is in the Cockaponset State Forest, Haddam. The rectangular plots consist of a series of strip transects that are one rod wide and 10, 14, or 20 chains long. The transects run approximately south to North on a magnetic bearing. Along the baseline, the initial station is number 0. Additional stations occur along each line at 2-chain intervals. Lines are lettered beginning with A as the westernmost line on all plots except Turkey Hill. The lines are four chains apart except on Turkey Hill where they are 5 chains apart. Each station consists of a rock monument with a steel T-bar stake driven into the center. The stake is painted red. Some stations may also have a wooden stake and corresponding metal tag from 1960. Regeneration (stems < 0.5 inches dbh) was tallied in 1977 and 1987 at 275 points using 1/300 acre circular plots. The center of each regeneration plot was located halfway, or 66 feet (20m), between the cairns with stakes. Stems were tallied by species in 1-foot height classes (<1, 1-1.9, 2-2.9,…,> 9 ft. tall). In 1977 and 1987 all woody stems including shrubs were tallied. For the 1997, 2008, and 2018 tallies, procedure was changed slightly for a shift to the metric system.