Conventional or Electric? Either Way, Bike! 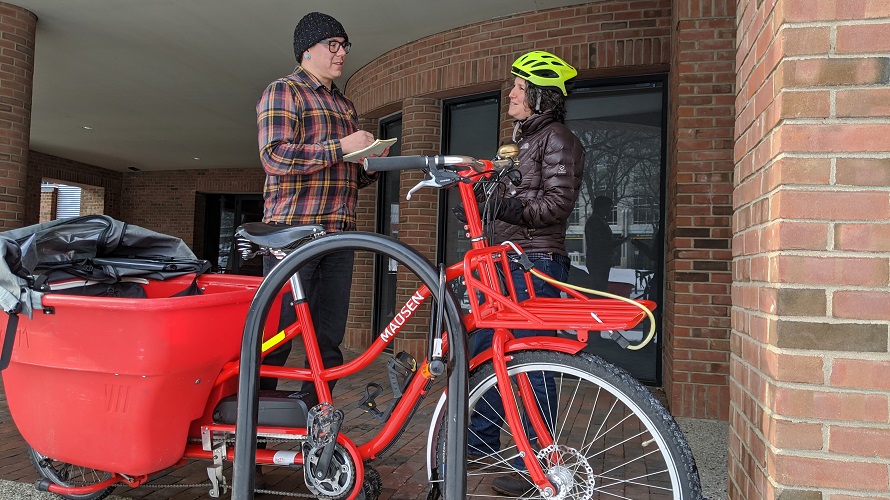 The popularity of electric bicycles (e-bikes) has grown recently in Vermont, but little is known about how Vermonters use e-bikes and what cities and towns can do to increase their use as an alternative to driving. Master’s student Stephen Montaño hopes that his research with Prof. Greg Rowangould at the UVM Transportation Research Center will help answer these questions.

Stephen Montaño is a Graduate Research Assistant pursuing a M.S. in Civil and Environmental Engineering at UVM and has been doing bicycle research for several years. In 2017 as an undergraduate student at the University of New Mexico, he received a fellowship from the Transportation Research Board Minority Fellowship Program to study how the amount of spending on pedestrian and bicycling projects affects the amount of walking and bicycling and frequency of fatalities crashes in states and cities.

In both 2018 and 2019, Stephen was awarded a Dwight D. Eisenhower Transportation Fellowship to support his e-bike research as a Master’s student. Stephen cites the health, economic, and environmental benefits that come with using bicycles as the motivation for his interest in studying bicycling.  Bicycling as a form of transportation benefits public health by improving air quality and providing the rider with physical activity. Furthermore, bicycling offers an economically accessible transportation mode for people who can’t afford the upfront and ongoing costs of owning a vehicle.

Stephen developed a survey to understand differences in how Vermonters using conventional and e-bikes choose their bicycle routes, the types of trips they make on bicycles, how safe they feel while riding and their preferences for different types of bicycle facilities and street designs. Preliminary data from the survey indicates that some differences exist between e-bike and conventional bicycle riders regarding route choice and infrastructure preferences. Stephen’s next steps will be digging into the complete survey results and creating a statistical model to better understand the significance of the differences between conventional and e-bike users.

Although Vermont’s transportation system is designed primarily to accommodate cars, Montaño purports that Vermonters can take advantage of the benefits of bicycling if the system’s infrastructure is optimized to suit bikes and e-bikes as forms of transportation. He hopes that this research will help communities across the state improve the design of streets and paths so that riding a conventional or e-bike is safer, more convenient and enjoyable for all.