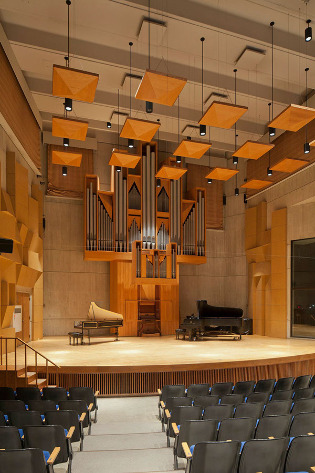 In a recent Seven Days article, Lane Series director and Music Department lecturer Natalie Neuert discussed the plan for upcoming major renovations to UVM's Recital Hall. Upgrades will include improved acoustics, new stage and house lighting, as well as a green room, storage, and reupholstered seats in the house.

"Have you ever sat at a concert in the University of Vermont Recital Hall and been distracted by the sight of people passing outside the stage-left window? Come this time next year, that window will be gone. In its place will be a door that leads to an addition behind the stage.

Thanks to anonymous donors, Burlington's 300-seat performance space is not just increasing in behind-the-scenes square footage but getting an interior makeover, as well — its first since the building was completed in 1974."

UVM invites supporters of the Music Department and Lane Series to donate to the renovation fund by naming a seat in the hall.