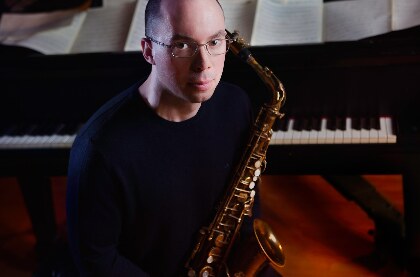 On November 7 and 8, affiliate artist Brian McCarthy premieres his new nonet, After|Life, at the Flynn Center for the Performing Arts. In a recent interview with Seven Days, McCarthy spoke about the inspirations behind the project, which "interprets the formation and dissolution of the primordial nebula, the reigning scientific explanation of how our solar system was formed."

"Saxophonist, composer, and arranger Brian McCarthy draws inspiration from the history of jazz while maintaining a modern awareness. In this premiere of his latest nonet, McCarthy’s compositions consider the arising of a giant stellar dust cloud, the Primordial Nebula. Out of stars, planets, order, and chaos emerges all that connects and shapes the world we live in. In 2017, McCarthy debuted his nonet The Better Angels of Our Nature in FlynnSpace; the record was named a Best Album of 2017 by HuffPost as well as DownBeat and Cadence magazines."