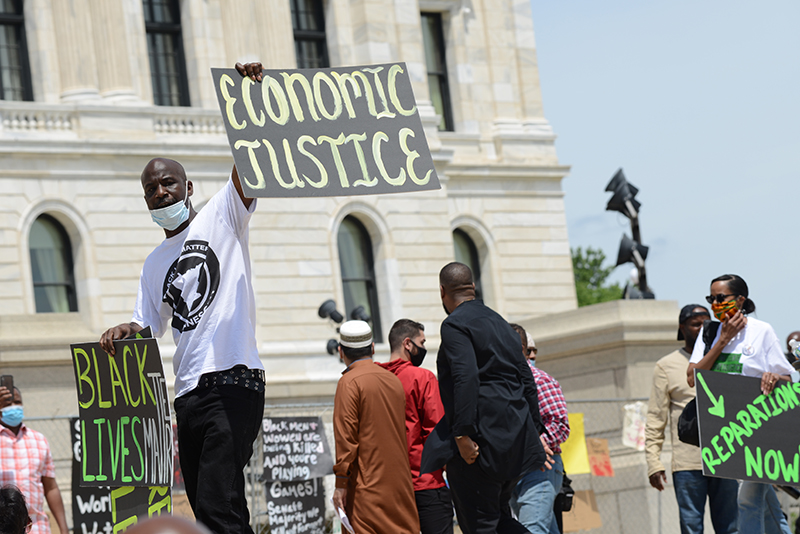 Racial justice has been at the global forefront since the police killing of George Floyd in Minneapolis, Minnesota, this May. On June 19, 2020, a few hundred gathered outside the Minnesota State Capitol in St. Paul to demand reparations from the United States government for years of slavery, Jim Crow, segregation, redlining and violence against Black people from police. (Photo: Fibonacci Blue, via Wikimedia Commons)

The City of Asheville, North Carolina, made headlines on July 14, when its city’s council unanimously approved a resolution to provide reparations to its Black residents. The resolution apologized for the city’s role in slavery, segregation and for “carrying out an urban renewal program that destroyed multiple, successful black communities,” and seeks to make amends for those actions. Asheville is only the second city in the U.S. to approve such a measure, following the lead of Evanston, Illinois, which passed a resolution on reparations a year prior.

As these two cities begin to pave the way for others, we asked University of Vermont’s Stephanie Seguino, an expert in the economics of stratification — economic institutions that lead to and perpetuate economic inequality — to help paint us a more complete picture of the cost of slavery and why reparations are so complicated.

1) How valuable or significant were slaves to the U.S. economy before the 13th amendment? What made it so valuable—the actual labor provided by slaves or did the institution of slavery prop that up to be even more valuable?

Slave labor—labor that is not compensated—reduces the cost of production, whether that be of tobacco, cotton, rice, sugar or any other type of goods. This then raises the profits going to the slave owner to a higher level than if labor had to be compensated. Along with raising the profits going to slave owners, slave-produced goods can be sold more cheaply than if labor were compensated. Thus, the beneficiaries of slavery are both plantation owners who derived great wealth from exploitation of enslaved people and many in the North and elsewhere who purchased goods produced by slave labor. Cheap commodities produced by slave labor further fueled northern industries, especially the textile and garment industry. That industry is typically the first to develop as a country industrializes and sets the stage for further industrialization. New England’s textile mills (in Massachusetts and elsewhere) played a key role in the U.S. industrial revolution. Their supply of cotton came from slave labor on Southern plantations. Northern manufacturing firms benefited greatly then from cotton, and their costs were cheapened by slave labor. Moreover, cotton was the leading American export from 1803 – 1936 in the U.S. Cotton generated an enormous quantity of foreign exchange, allowing the U.S. to import many more goods than might otherwise have been possible. As this suggests, the beneficiaries of slavery extended far beyond southern plantation owners.

Banks, too, profited from slavery. Slave owners often used slaves as collateral to secure bank loans. If plantation owners defaulted on loans, the banks took ownership of these slaves. In 2005, JP Morgan issued an apology for its role in slavery, acknowledging that two of its subsidiaries accepted approximately 13,000 slaves as collateral and took ownership of some of them when plantation owners defaulted on their loans.

I encourage those interested in this topic to read Edward Baptist’s "The Half Was Never Told: Slavery and the Making of American Capitalism" (2016) on this topic.

2) In today’s economy, what sector(s) or industry(ies) are comparable to the size of slavery? What percent of the economy or wealth do Blacks hold now?

The racial wealth gap is in part due to housing segregation and discriminatory lending by banks. Much of the average person’s wealth is in their home, so exclusion from home ownership has severe wealth implications. Blacks also have less financial wealth, due to low wages, higher unemployment related to job discrimination, as well as exclusion from good schools. It takes significant initial wealth to launch and sustain a business, and Blacks, generally have considerably less money to invest in business startups.

Wealth inequality in this generation perpetuates it in the next, as a result of in vivo transfers and inheritance. In fact, inheritance plays a key role in the intergenerational transmission of racial wealth inequality. There is a sort of “sedimentation” of racial inequality, with successive and accumulating layers of wealth inequality produced by each successive generation. Black parents deprived of resources have little to pass on to their children. In contrast, those families with assets (typically white Americans) in contrast, can fund their kids’ college education or business startup and purchase of a home—all things that lead to wealth accumulation.

3) Prior to Abraham Lincoln’s death, slave families were to receive “40 acres and a mule” and assistance from the Freedman’s Bureau to successfully transition to freedom. Are those considered reparations?

The allotment of 40 acres and a mule may be considered reparations — although real reparations also require some form of atonement and acknowledgement of harm done, as well. The goal of "40 acres and a mule" proposal was narrower. Its goal was to help people who had been enslaved and entirely dispossessed of any material means to provide for themselves. Had we made good on that promise, it would still have not have reimbursed formerly enslaved peoples for the wealth they had generated but were excluded from enjoying. So, one might say “40 acres and a mule” was a down payment on what was owed.

4) The U.S. reneged on that proposal, but if it had been implemented 150 years ago, would it have made a significant difference in the lives and economy of America today? What could we reasonably expect to see as a major difference today if it had passed?

In pockets of the country where Blacks were less fettered by racism in pursuing economic opportunities, such as Black Wall Street in Tulsa, Oklahoma, we see their immense creativity, tenaciousness, and ingenuity. The many scientists, writers, artists, and scholars of African descent in the U.S. are testimony to that, as well. As this suggests, oppression and exclusion of Blacks has been costly for U.S. society as a whole.

We missed out on innovations and higher productivity (not to mention the cost of surveillance of Black bodies and other forms of oppression that could have been invested more productively). We have hired under-qualified whites for positions for which they were not suited, while excluding more qualified Blacks. This has economic costs. Economic research has shown in recent years that inequality, such as the racial inequality in the U.S., is costly not only to those excluded from opportunities but also for the economy as a whole.

One question we might ask is whether white folks would have allowed Blacks to prosper without undermining Black progress, had the “40 acres” proposal been implemented. At many stages in U.S. history, it is Black advancement that has triggered racial backlashes. The Tulsa riots are an example of white people attempting to keep Blacks in a subordinate position in support of the white desire for a racial hierarchy, with Blacks at the bottom. Reparations then would need to be accompanied by some kind of racial reckoning, some honesty about our history, and a shift in a racial ideology that justifies racial inequality.

It is important to remember the U.S. has sidestepped several opportunities — not just the "40 acres and a mule" proposal — to make reparations and instead, has enacted and continues to enact policies that reinforce racial economic inequality. Blacks were denied the vote for many years, and to this day, face efforts at voter suppression. This is important because the distribution of our tax dollars is determined by elected officials. Lack of representation means a lack of voice and influence on how those resources are allocated. Moreover, the New Deal and GI Bill systematically excluded Blacks, giving white working-class folks a leg up that Blacks did not have.

Jim Crow laws, a form of apartheid, too, excluded Blacks from good schools and good jobs. The government’s complicity in racial housing segregation that denied Blacks equal access to lending and to home ownership, an important source of wealth accumulation in the U.S., tell us that the issue of reparations is not only in relation to slavery. Blacks are excluded from employment, with an unemployment rate double that of whites (and that is if we exclude the incarcerated Black population). This has created less job competition for the white working class, which has thus also benefited. The negative health effects of racism — a higher infant mortality rate amongst Blacks, higher rates of hypertension and shorter lives — have generated costs for Blacks.

Thus, the burden of anti-Black racism extends far beyond the period of slavery. It is manifest in labor market discrimination, confinement to neighborhoods with lower levels of social services, inferior schools, lack of safety, as well as over-surveillance by the police. This is a brief sketch of the complex of factors that must be reckoned with in any reparations proposal. We must take this collective history into consideration in discussing what reparations look like.

Ta-Nehisi Coates’ “The Case for Reparations” in the Atlantic (June 2014) eloquently described it this way: “Two hundred fifty years of slavery. Ninety years of Jim Crow. Sixty years of separate but equal. Thirty-five years of racist housing policy. Until we reckon with our compounding moral debts, America will never be whole.”

5) H.R. 40 — Commission to Study and Develop Reparations Proposals for African-Americans Act — proposes the examination of the impact slavery and discrimination had on slaves and their descendants, and to begin assessing how reparations might successfully be implemented to remedy those lasting effects today. Are there any popular proposals circulating now, such as “40 acres and a mule” was in the 1860s?

There are a number of proposals. The proposals differ on who should receive reparations, how much, in what form, and how they will be paid for. Darity and Mullen, "From Here to Equality: Reparations for Black Americans in the 21st Century" (2020) argue for two eligibility requirements for recipients: 1) those who can prove they are a direct descendant of an enslaved person; and 2) self-identification as a Black person at least 12 years prior to the enactment of a reparations commission or program. The proposals vary on whether there should be direct payments to individuals, for example, or funding for programs such as free college education, etc.

How much is owed? For those whose emphasis is compensation for slavery, the approach has been to calculate present value of wages that should have been paid. Estimates using this approach vary widely from a half trillion to more than $7 trillion, depending on the interest rate used, and other factors (such as the value of what enslaved people produced). Others include calculations for the present value of 40 acres per freed slave, and estimates are as high as $3 trillion (Darity and Mullen 2020).

Another approach is to calculate the difference between white and Black median earnings. This difference would comprise the reparations payment, and in one estimate, this amounts to roughly $16,000 per person. Still another approach is to focus on the wealth gap, with the reparations payment being the size of that gap. Darity and Mullen (2020) estimate that to be $107 trillion or roughly $267,000 per eligible person.