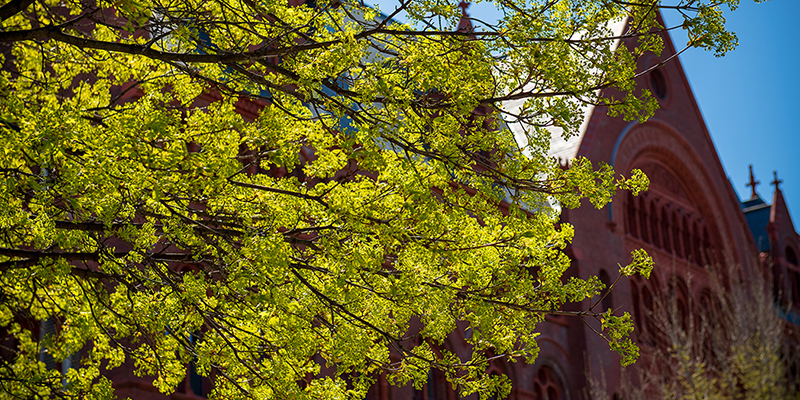 Access and affordability of a UVM education was a top priority of the Move Mountains Campaign. More than $80 million has been raised for student financial aid, including the new scholarship funds that have helped support these promising graduates of the Class of 2019. 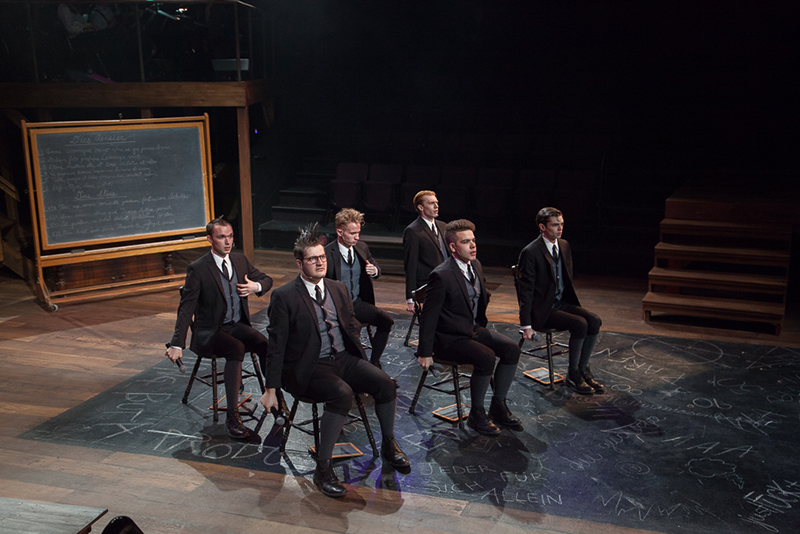 During his final semester of college, secondary education major Jay Hayden (pictured: back row, center) runs on an alternate schedule to his fellow seniors. While many of his friends are on their last spring break, he is thick in the rite of passage known as student teaching. Hayden prepares to take the lead on four English classes at Burlington High School, world lit and an honors section for sophomores, where units on Herman Hesse’s Siddhartha and Shakespeare’s “MacBeth” are among the lesson plans.

As Hayden talks about stepping in front of a classroom, he draws on his stage experience as an actor—know your script, read your audience, harness your energy. He was involved with drama during high school and is president of the University Players student group. Hayden delivered an electric performance as Moritz Stiefel in the 2017 Royall Tyler production of “Spring Awakening.” Theatre Professor Gregory Ramos directed the show, and Hayden counts him as a key influence. Addressing the young actor’s tendency to tighten up during emotionally intense scenes, Ramos continually urged Hayden to relax—“let it happen and it will.”

Hayden envisions a career that combines theater and teaching, with a long-term goal of founding his own theater company. “I want to impact people with the art form that I love so much, and I think the best way to impact a community is through impacting the youth who are part of it,” he says. 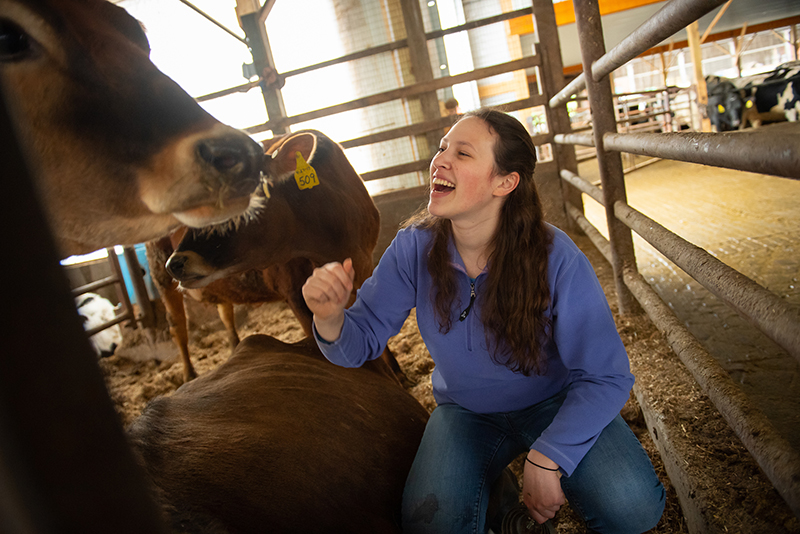 Sharon Palmer knows well the challenges that today’s Vermont dairy farmers face. Her parents farmed on their own for years, and her father is now head herdsman for Monument Farms Dairy in Weybridge. Growing up, Palmer herself raised and showed heifers in 4-H; she is grateful that the off-spring of those same cows are now integrated into the Monument Farms herd.

“Dairy isn’t just a business; it really is a way of life. For so many people who I know, it is what they love to do. As hard as that is, it is the only thing they can see themselves doing,” she says.

Her experience with and passion for the dairy industry and, more broadly, agriculture motivated Palmer to study food systems at UVM, coupled with a dairy focus in animal science. A semester at the Miner Agricultural Research Institute in Chazy, New York, was an immersive dive into best practices in dairy management.

As graduation approaches, Palmer envisions a career that will help preserve and promote systems in which people know where their food comes from and the people who produce it. “I think that is one of the things that Vermont is doing pretty well. Especially with our dairies, you know the farmers, you see the farms,” she says. “I hope we can see that continue into the next generation in Vermont, because it is such an iconic part of this state.” 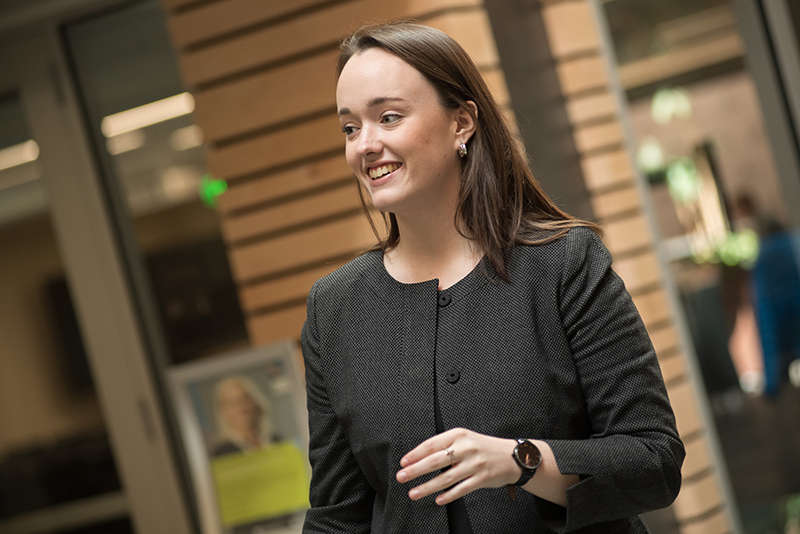 When Abby Collins turns back the clock and considers why UVM prevailed as her college choice, she gives a nod to parent intuition. She recalls the drive back home to Nashua, New Hampshire, after a tour of campus and events for admitted students. “I really liked the energy, and I remember both my mom and dad, with that parental eye, saying, ‘This is where you’re supposed to be, this is your place, these are your people,’” Collins says.

Her studies in the Grossman School of Business have focused on analytics as a major, bolstered by a minor in pure mathematics. Coursework meshes with the considerable responsibilities Collins has taken on as a student leader of the Family Enterprise Case Competition. Working with fellow students and professor/mentors such as Dita Sharma to arrange an event that drew twenty-six teams from seventeen countries was a test that prepared Collins well for the professional world after graduation. “To say it’s been a foundational, pivotal point of my college career is honestly an understatement,” Collins says. “It is something that has defined my time here.”

Also key to her UVM years, she says, is the broader experience of the university beyond the walls of Kalkin and Ifshin halls. Collins has appreciated having roommates who are linguistics majors or art history majors, friends who think differently than she does, and she values the environmental ethos at the university’s core. Reflecting back again on that college choice, she says, “I think choosing UVM wasn’t just about the academics. Beyond that, I knew that the person who UVM would shape me to be was definitely the person who I wanted to be.” 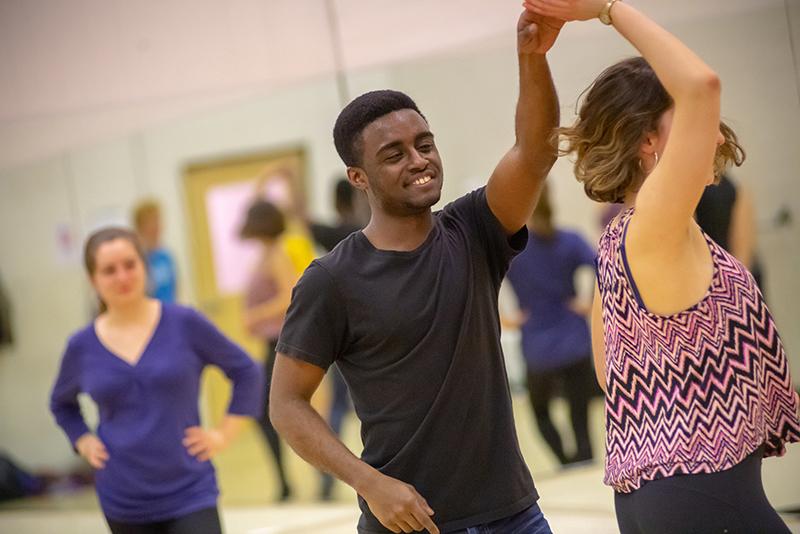 It’s been a long journey to Kwasi Efah’s senior year at the University of Vermont. After spending most of his childhood in Marlboro, New Jersey, he moved to Ghana at age eleven with his father. Efah completed his junior year studying electrical engineering in Ghana when he decided he wanted to broaden his studies by expanding his focus to computer science, a decision that would bring him to UVM in 2017.

Efah is grateful to the student services staff who have helped him navigate the complex process of an international transfer deep into his college experience. While he expected the challenging academic juggle of a computer sciences major and electrical engineering minor, Efah says he’s discovered a good deal he didn’t expect at UVM. Thinking Vermont was all forest and farm, he’s found Burlington to be a diverse and lively small city. On campus, he’s found fun and his social circle with the salsa dance team. And, of course, he’s learned to ski.

Efah sees a master’s in computer science or a related field in his future. But first, he’s eager to put his bachelor’s degree to practice with work in software development or computer programming. 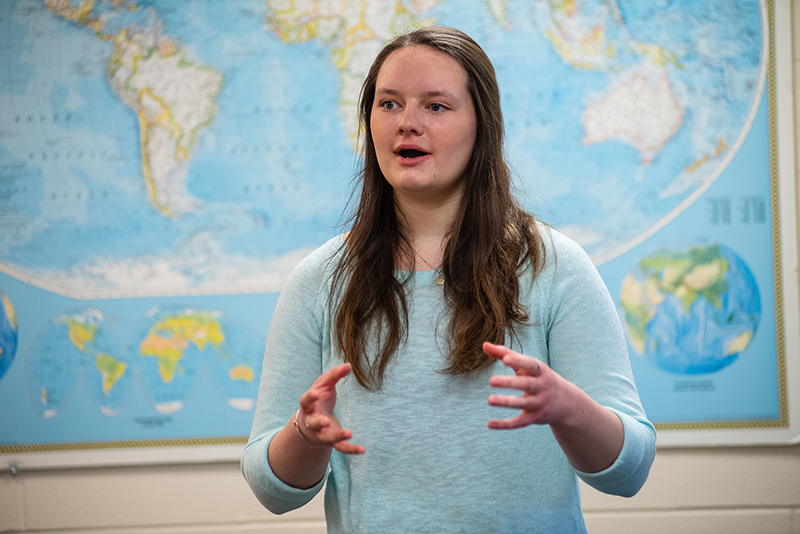 Spring semester, as the national debate over immigration, crime, and border security raged at fever pitch, Hayley Barriere quietly drilled down on the work of her senior honor’s thesis. Examining perceptions of immigrants as criminals in the United States, the focus of her writing and research could scarcely have been more timely. Analyzing both mainstream media coverage and White House executive summaries around the issue, the global studies major has been focused on the topic since taking a sociology course last year on gender, race, and crime in the United States with Professor Eleanor Miller.

Barriere’s interest in global studies is rooted, in part, in high school service trips to Somotillo, Nicaragua, sister city of Bennington, Vermont, her hometown. She says the multi-disciplinary nature of global studies and the community of the Honors College have created a rich academic experience during her years at UVM. And she’s broadened that by working as a coordinator with the local Big Buddies program, study abroad in The Netherlands, and work in UVM’s Office of International Education.

An internship with the Refugee Resettlement agency in Chittenden County was another important part of her experience, shaping her thoughts on directions her career might take after graduation. “I had the chance to meet people from all over the world and see what it is like for people to actually go through the whole immigration application process,” Barriere says. “The number of people who apply to come to the United States versus the number who are actually able to resettle here is astonishing.” 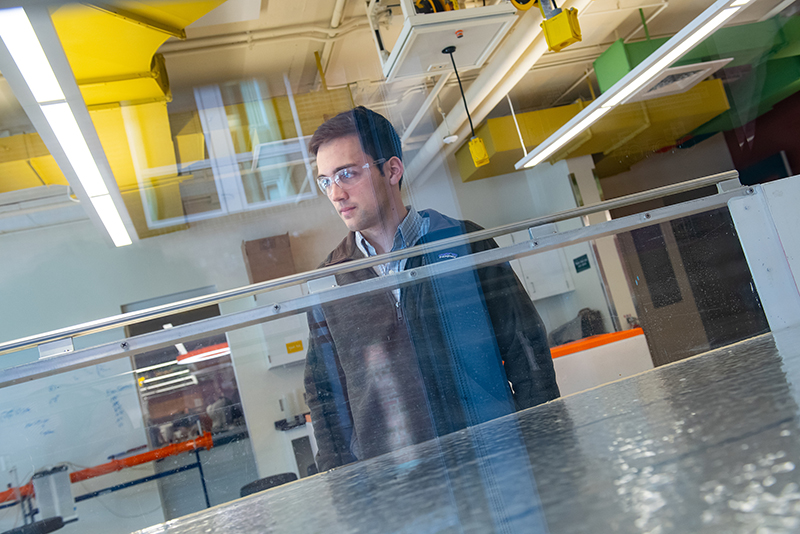 Howmanydaysofwaterdoescapetownhaveleft.co.za—the website’s url cuts to the chase with the dire situation in South Africa’s second-largest city, a grim countdown that predicts the Cape’s dam levels will reach 10 percent in November 2019. Those numbers are revisited early and often in water quality engineering courses taught by Raju Badireddy, assistant professor of civil and environmental engineering. They’re a direct lesson on the truth that the fate of the Earth—not to mention the species reading this article—depends to great degree on the fate of our water.

“Professor Badireddy is always talking about how we can change the world with water engineering. It’s an issue that’s only going to grow in the coming decades,” says Christian Boisvert, senior in environmental engineering. Enrolled in a 3+2 program with St. Michael’s College and UVM, Boisvert will receive bachelor’s degrees from both schools in May. He built his science foundation with chemistry courses at St. Mike’s and has focused in on his interest in water engineering at UVM.

A senior capstone project has taken Boisvert and several fellow students up to Derby, Vermont, where they’ve analyzed the current state of the water treatment plant. This spring, they’ve developed a report with recommendations for possible upgrades, a service learning project that begins to give Boisvert a sense of his professional future, putting engineering to work to protect the world’s water.