Origin of a Biologist

Most of this planet is covered in salt water. From the distance of space, it looks like a serene blue skin. Look beneath the surface, and life gets more complicated. 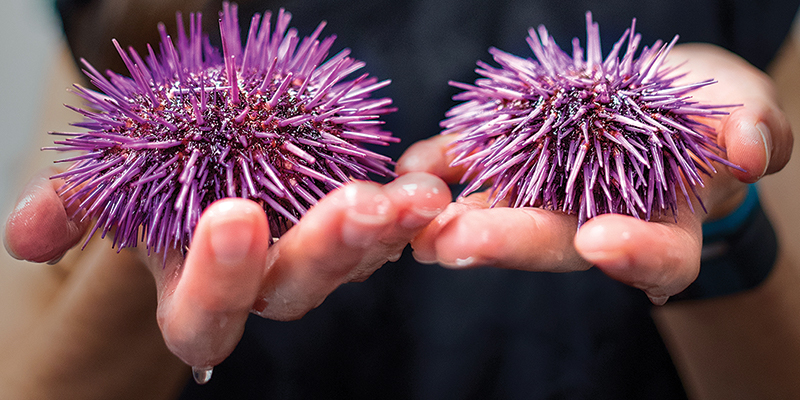 In her early childhood, biology professor Melissa Pespeni lived on the edge of the sea on the Japanese island of Okinawa. She would walk down to the water with her snorkel, plunge into the waves to catch fish, then take them home to her aquarium.

Other days, Pespeni would climb the three-story sea walls—near the U.S. military base where her Greek-Irish father worked as a musician and carpenter and her Mexican-American mother worked as a cake decorator at the Baskin-Robbins—perch in a groove, and catch geckos. “It was blissful,” she says. “My father always told me I could do anything I wanted to do.”

Four decades later, she plunges her arm, up to the elbow, into a tank of salt water in the basement of UVM’s Marsh Life Science Building and very gently pulls up two sea urchins. Pespeni is training one of her undergraduate students how to take tissue samples from these spiky purple creatures. Urchins live in kelp forests and the rough-and-tumble intertidal zone. They’re smashed by waves and preyed on by sea otters and lobsters. They are so tough that they can dig holes in rocks. Urchins are survivors, but the rising acidity of the oceans threatens to dissolve their calcareous shells.

Pespeni has become internationally regarded for her studies exploring the mechanisms that allow urchins and other sea invertebrates to survive, and what the brew of new threats—like rising temperatures, microplastics, novel diseases, and toxic algae—might portend for life in the oceans. She wants to know if the huge range of conditions these animals have experienced over millions of years has encoded tricks in their genes, or hidden physiological capacities. And she wants to project forward, to understand how some animals could be resilient in the onslaught of more chaotic conditions now building up in the warming oceans.

So, seashore-explorer-girl grows into invertebrate-researching professor. Neat and simple as that? Hardly. Melissa Pespeni’s life would take dramatic turns, like the stuff of a novel or screenplay, from those idyllic first years on a small island in the East China Sea.

ON OKINAWA, eventually, Pespeni’s family moved uphill, away from the sea, flooded by one-too-many typhoons. Even fiercer family storms were brewing. Her parents had met as teenage runaways, panhandling on the streets of Santa Barbara—fifteen and seventeen—and her father had, under pressure, joined the Air Force when they discovered they were pregnant. Her parents hid the fact that he was an “alcoholic and drug addict,” she recalls.

The family returned to California when she was eleven, her father’s heroin use returned, and he was discharged from the Air Force. Pespeni’s parents’ marriage exploded, and the courts granted her father full custody of Pespeni and her younger sister because he had “the so-called stable career,” she says.

For two years, the girls lived, mostly alone, in a one-room shack in Merced with no running water, walking themselves to school. “The door was always open,” she says. When her father would drift through, “and if he had a bit of change, he’d have us buy milk and Oreos, because that was what he considered food,” she says, “the rest of our food was provided by the school, breakfast and lunch.”

Eventually, her mother regained custody of the children and moved them to southern California to join her newly started family. But troubles persisted. Her step-father, a former drug-acquaintance of their dad, while “mostly kind,” Pespeni says, would suffer extreme periods of pain from an unknown disease. In response, he grew abusive—hitting Pespeni and her sister, even making them wear bags of cat feces around their necks all day if they forgot to clean the litter box. Both her father and step-father died at early ages of complications related to drug use. “Essentially they were martyrs to their addictions,” Pespeni says.

A saving grace, her mother rented a house in Claremont for the strong schools. There, Pespeni became friends with the daughter of a local United Methodist minister and school administrator. She calls them “my other family.” In a gifted program on Okinawa, mathematically astute in high school, Pespeni’s mind offered a way out of the circumstances she had lived. The Daltons, the family that had befriended her, helped her realize that she could go to college. She has a keen memory of them rushing her to the post office to drop her application in the mail on deadline.

At the University of California, San Diego, she completed a double major in 2002, receiving a bachelor’s of arts in critical gender studies and a bachelor’s of science in ecology, behavior, and evolution. In 2010, she received her PhD in biology from Stanford University and joined the UVM faculty in 2014. 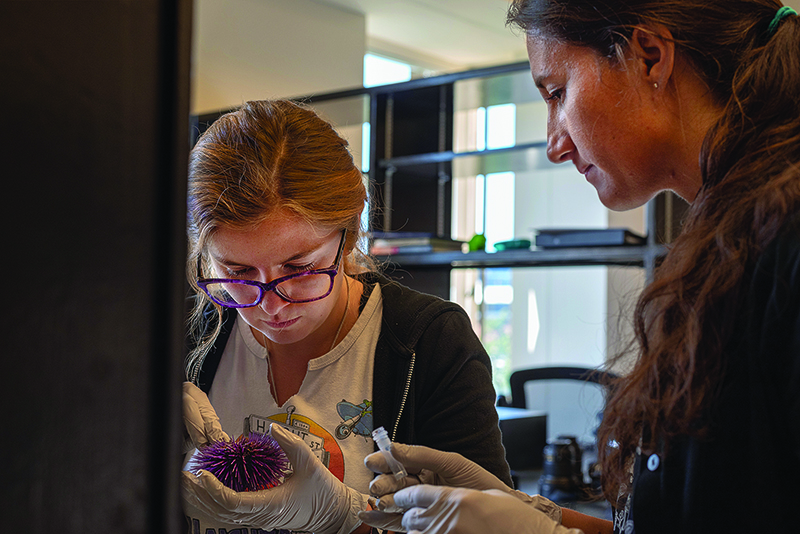 Mackenzie Kerner ’20 working with Melissa Pespeni in her lab.

MELISSA PESPENI has an impressive CV, with pages of publications and grants received. But she wants to share the complex stories that preceded those achievements, the ones that bend perceptions of the life path of a university professor. “I think for people to know that I’m the first in my family to go to college, that I’m from an extremely low-income background of addicts and abuse is useful,” she says.

The irony is not lost on her that she now echoes her father’s words: “I want students that have my background, or any other background, to know that they can go on to do whatever it is they want to do,” she says. “They can become a professor.” And, despite the trials of her childhood, Pespeni attributes her success to her mother’s deep love. “My dad gave me ambition,” she says, “and my mom gave me compassion.”

Pespeni wants to share her stories—but she wants to dig beneath the labels. “I am a woman of color and Hispanic. Yes, that’s true. But I don’t think I’m perceived as a faculty of color, so I don’t experience the same hardships that others do who are faculty of color,” she says.

Still, she has been shaped by experiences that give inner life to those labels: Pespeni’s grandmother was discriminated against for being Mexican and brown-skinned in California and was ashamed of her heritage, so Pespeni and her grandfather would sneak off at family parties to speak Spanish. “She would come and find us and tell us to stop.”

“Universities and funding agencies are often concerned with checking boxes,” Pespeni says. “But where is the box for ‘grew up in a shack?’”

Pespeni hopes for a deeper exploration of diversity. This is one of the reasons that she founded and co-leads the QuEST Program, a new effort at UVM, funded by the National Science Foundation, to prepare PhD students to work on pressing environmental and global health problems.

“We’re training the students to get away from a mentality that pervades in science: that there’s no emotion, there’s no culture, there’s no personal identity behind one’s research,” she says. The students are recruited from many backgrounds, and the program works to build community among them, with shared courses, meals, and activities. “To increase diversity in science, we have to have community,” Pespeni says. “You can’t have community with people you don’t know or trust.” The program creates space for students to share their histories, “their stories,” Pespeni says. “We’re trying to remind them that you had a path that got you here. You have a motivation. Explore it. Hang on to it.”  For her own scientific career, Pespeni says she was “running to escape. This kept me very motivated for a long time,” she says. “Going forward, nothing was harder than what I had experienced.”

“We all carry around diversity that is unrecognized on the surface,” she says. Including urchins and sea stars. Pespeni’s research on the devastating wasting disease that is causing sea stars along the Pacific Coast to turn to goo—their legs falling off before they die—strongly suggests that it’s not one culprit killing the animals. Instead, the sea stars’ entire microbiome—the assembly of bacteria and other invisible organisms that live on and in the sea star—appears to be thrown out of whack in ones that get sick, and provides protection to the ones that live. And some purple urchins, Pespeni and her student were surprised to discover, carry rare genetic variants in their DNA that are highly useful for survival in a more acidic sea. These genes can let the next generation of urchins alter how various proteins function—like the ones they use to make their hard-but-easily-dissolved shells.

As a data-driven scientist who wants to understand the root mechanisms that allow organisms to adapt to a changing world, Pespeni is acutely aware of the risk of false comparisons and category errors—of the risk of mixing up correlation with cause. The kind of mythical origin stories that a certain science journalist finds tempting—she rejects. “Do I study marine organisms because I caught blue damselfish as a child?” she asks. “If I had gone to Berkeley instead of Stanford, I’d have studied lizards and you’d be writing about lizards,” she replies.

“You asked why I care about diversity in higher education and biodiversity,” she says. “They’re both important, but I don’t think there’s a connection.”

But then she pauses. And sits quietly in her office for a long time. It’s silent, but for the burbling of a sea star aquarium just outside the door. “I don’t know,” she says, tears coming to her eyes. “It’s tenuous.”

Then she quietly talks, almost to herself, gingerly putting words to her thoughts. “Maybe there is a core that relates to both. When you have a spectrum—a number of species or types of people—not one of those should determine the fate of all the other ones,” she says, slowly beginning to smile. “Everything benefits when there is not just one kind.”