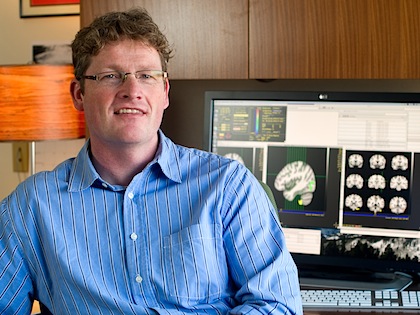 A landmark longitudinal national study led by University of California, San Diego scientists will explore the developing minds and brains of approximately 10,000 children in an effort to answer questions ranging from the origins of resilience and creativity to identifying biological and behavioral factors that put some youth at increased risk of mental, emotional and academic problems. The effects of substance use on the still-developing teen-aged brain will be a particular focus of the study.

Hugh Garavan, Ph.D., University of Vermont (UVM) professor of psychiatry, will be a project co-director and will lead research efforts at the UVM site. He has been a longtime participant in a number of similar studies conducted by the IMAGEN Consortium – a multicenter European project for which he served as the project leader in Dublin, Ireland – with which he has continued to collaborate. Other UVM co-investigators include Alexi Potter, Ph.D., James Hudziak, M.D., and Julie Dumas, Ph.D. from the Department of Psychiatry, and Richard Watts Ph.D., from the Department of Radiology.

More than 10,000 children between the ages of 9 and 10 will be enrolled at a number of research institutions across the country – including more than 500 children at the UVM site – and followed for 10 years.

The Adolescent Brain Cognitive Development – ABCD – Study was initiated by the Collaborative Research on Addiction at NIH (CRAN), a consortium of institutes that include a focus on addiction research, but several other institutes will contribute as well. The costs for the entire 10-year study, distributed across the national consortium, are expected to be about $300 million.

UC San Diego will run two central components of the study – the Coordinating Center and the Data Analysis and Informatics Center (DAIC) – and data collection will occur at 19 sites throughout the USA.

“I will be involved in the particulars of the study design – including who to recruit and how – and will monitor the study to ensure its adherence to the proposed design,” said Garavan, who will also serve as a member of the MRI and Informatics workgroups of the DAIC.

The ABCD study will be unprecedented in scope, monitoring and investigating participants’ cognitive, intellectual, social, and emotional functions; physical health; education; recreational experiences; and biological and functional maturation of their brains. Novel mobile and web-based technologies will be employed to observe development as closely, but as unobtrusively, as possible.

In a National Institute on Drug Abuse (NIDA) news release, Director Nora D. Volkow, M.D., said “With advances in neuroimaging and other investigative tools, we will be able to look in greater detail at the impact of substance use on young people. Adolescents have access to high potency marijuana and greater varieties of nicotine delivery devices than previous generations. We want to know how that and other trends affect the trajectory of the developing brain.”

(This article was adapted from a press release produced by the University Communications and Public Affairs office at UC San Diego.)