Vermont farmers have an advocate and friend in Professor Heather Darby 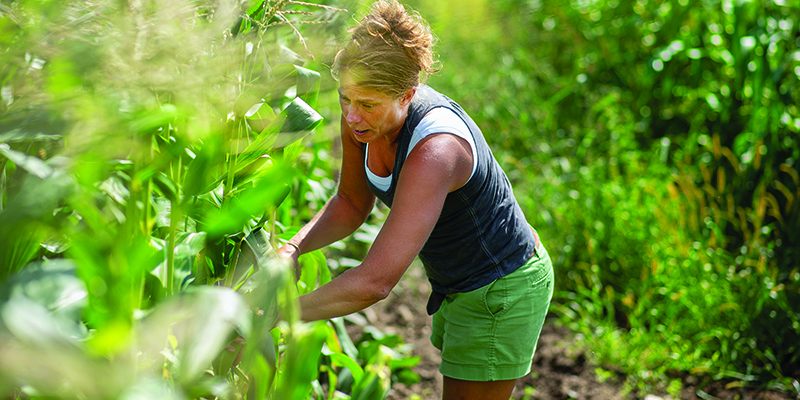 I’m driving north on Route 2 to look for Heather Darby. “Not going to be on campus,” she told me very early this morning. “I’ll be at Borderview all afternoon. You can find me in the field or I might be in the barn.”

After crossing the bridge off North Hero Island, I pass the tiny public library and St. Amadeus Church in Alburgh, out through the open pastures beyond the village, and pull over for a moment at a farm stand stacked with tomatoes and squash—the 130-acre Darby Farm. Here, Heather Darby and her husband raise dairy heifers, tend bees, and sell fruits and vegetables by the side of the road. Her great-great-great-great-grandfather, Jonathan Darby, started farming on this shore of Lake Champlain in 1800. The farm passed down to George Darby, then Ransom Darby, Aubrey Darby, Arthur Darby, and Alan Darby, Heather’s dad. In 2003, she took over the farm—father to daughter.

But professor Heather Darby is not tending her own farm today. She’s busy tending all the farms across Vermont—which is why she’s driven her truck two miles north to Borderview Research Farm.

A sharp left, within feet of the Canadian border, then a rough ride along Line Road leads to a neat white barn and hundreds of green rows and rectangles—corn, oats, rye, and dozens of other plants: research plots marked with pink and orange surveyor’s flags.

Heather Darby comes bustling out of a shed, carrying a yellow box. “You found us,” she says with a big smile, and, without pausing, walks between long rows of harvested hops stretched out on a blue tarp, noting that these are a variety called Centennial. “A lot of brewers like them,” she says, and begins to explain how—with her crop and soils coordinator, John Bruce ’13—she’s been testing the fertility of hops with different amounts of nitrogen.

“We’re just starting to check out a bunch of wild hops varieties too, from all over the state,” she says. “Oh yeah, we also have a couple of interesting studies where we’re looking at the terroir of hops. Are the hops’ aromas and flavors influenced by where they’re grown?” Darby grabs a handful of hops and takes a deep whiff. “I do like an IPA,” she says. Then she’s on the move again. “Let’s find Roger,” she says, heading into the barn.

Roger Rainville has long farmed Borderview, milking dairy cows for forty years. He knew Heather’s father, also a dairy farmer, and he’s known Heather since she was four years old. Loading a bag of hops onto a table in the barn, he says, “She was always smart—and just always doing—doing, doing. And now she’d do anything she can to help farmers. It’s a lot of work, but I guess you could say it’s inspiring because Heather’s so sincere about doing this, all this work, for others,” he says, a bit mournfully. Then he suddenly laughs. “I thought I knew everything,” he says, “but now she’s the boss.”

The Borderview Research Farm is a remarkable partnership between them—perhaps unique in the United States. In a way, it began when Darby left Vermont to study agronomy in New Hampshire and Wisconsin and complete her doctorate in crops and soils at Oregon State University. Eventually, she returned home to the farm she grew up on and joined UVM’s faculty as an agronomist and soils specialist. As a professor in UVM Extension with a secondary appointment in the Department of Plant and Soil Science and as a fellow in the Gund Institute for Environment, she’s clear about who she works for. “I do all this research, all this science, for the farmers,” she says.

The transformation of Borderview from a conventional dairy farm to a research site began in 2004 when Darby and Rainville started a field trial, growing different strains of canola for oil to brew biodiesel to power his equipment. It succeeded. Over time, the farm produced thousands of gallons of fuel—and more and more of its acreage was dedicated to research. Today, Darby’s grant funding allows UVM to rent the whole farm.

Darby sees great value in conducting her research on a regular Vermont farm in northern Grand Isle County, working side-by-side with Rainville, where farmers can see the trials on familiar ground. And where she (and her technicians and staff—now at seventeen employees) can run experiments that respond directly and quickly to what they’re hearing from bakers and brewers and chefs, as well as farmers. (Randy George, of Red Hen Bakery in Middlesex, told me that Darby’s work to found the Northern Grain Growers Association and to open a crop testing lab at UVM has radically improved how regional farmers grow wheat—transforming local flour from “unusable” to “delicious; far better than I could have imagined,” he said.)

“I’ve worked on a lot of research farms at different universities. Everybody’s done on Friday at 4:30,” Darby says. “That’s fine, but I’m a farmer and I run this place like it’s a farm. If the ground is ready, it doesn’t matter what time of day or day of the week it is. And Roger’s right there with me, you know. I couldn’t do it without him.”

As she’s talking, Darby carefully counts out one hundred hops cones on the table. Then she puts the hops in a bucket, weighs them on a scale, and writes the data on a clipboard. And it’s not just hops. Darby has more than fifty agronomic experiments going each year—looking for seeds and crops that have the best quality, highest yield—and for new ways, she says, “to keep our remaining farmers from going under.”
“All told, we’ve got almost a thousand varieties,” she says—and then she and Rainville start listing: “spring and winter wheat,” she says.

“Oats and rye,” he says. “Short-season corn, long-season corn, organic corn silage. Flint corn too,” she says. “Soybeans,” he says. “And organic soybeans—and now there’s lots of interest in hemp,” she says. “Fifteen varieties of canola,” he says. And one they didn’t list: not far from this barn, Rainville has planted fifty acres of milkweed. A few years ago, Darby heard from a Canadian start-up that proved the silk inside the milkweed pods makes great insulation for coats—so they’re testing that too.

A few hours later, Darby has picked corn, picked up her six-year-old at school, and is now picking up handfuls of green forage—clover, alfalfa, bird’s-foot trefoil—that Rainville dumps out the back of an outsized riding lawnmower called a flail chopper. “There’s been a lot of growth in grass-only milk,” Darby says, shouting over the engine. “Those farms only feed with forage—no grain; their cows have to get all their protein from grass.” So she secured a $1.2 million grant from the USDA to work with these all-grass dairies and study what forages will be most nutritious.

Darby stops to eat a piece of raw sweet corn. “It’s so good that I haven’t cooked any all summer,” she says. But she’s at least as pleased by what’s growing between the rows of corn. “Most farmers, right now, if you ask them, would say that the climate is their biggest challenge. Of course, milk prices suck, but it’s even worse if you can’t grow a good crop and you’re losing soil every year because the weather has gone crazy with eight-inch rainstorms.”

Which is why she’s been studying the best new methods for farmers to return to an old tradition: growing cover crops between their corn—to hold the soil, increase organic matter and, sometimes, to harvest another crop after the corn. When Darby started her cover crop experiments in 2004 she estimates there were fifty acres of it being grown in Vermont. Now there are thirty thousand—roughly a third of all the corn in the state.

Rainville cuts the engine on the flail chopper and we can hear the voice of a small boy from the far side of the fields: “Mommy, I’m hungry.” Darby smiles. “Some days, he likes to come out and help,” she says, looking at her son, tumbling in the grass. 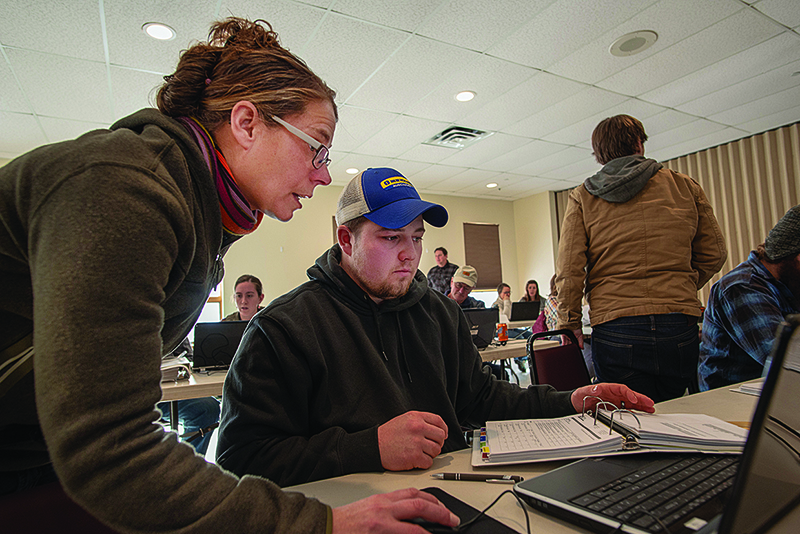 A winter wind blows past the windows of VFW Post 758 on the outskirts of Saint Albans. “Go into ‘Fields,’” Heather Darby instructs about twenty farmers sitting in front of laptops inside a darkened meeting room. “You should have your soil test in already,” she says, explaining what screen of goCrop software they’re supposed to be on. “It’s going to ask you for the average soil loss for that field.” Darby is leading a six-week course to train these farmers how to write and file a nutrient management plan now mandated by state water quality regulations for many Vermont farms.

“Are you paying attention, Earl?” she says, ribbing a gray-haired farmer. But she’s feeling dismayed. A few minutes ago, she gave them what she’s calls “the talk.”

“A lot of farmers feel powerless and I’m telling them that they’re not,” she explains. “They need to stand up for themselves and show how the whole state rides on their backs.”

“We all need clean water. It’s a public good and so we—the people—should all be in this together,” she says. Darby understands that phosphorus and other pollution is fouling Vermont waterways and contributing to algae blooms in Lake Champlain. “We all have to do better,” she says.

“But farmers are not always well represented, and so it’s hard for a lot of people to understand what they’re doing,” Darby says. “People just keep turning to farms to do more—until all the burden of cleaning up the water has been put on the farming community. Apparently, that’s the easiest and cheapest thing to do. But where does the problem begin?”

Here’s what Darby wants people to think about: “When you go to a store and buy food—you determine what type of agriculture we have in our country. It wasn’t the farmers who decided that we should have CAFO’s and fast food—and that where your food comes from doesn’t matter as long as it’s dirt cheap and that all the milk would be owned by a few companies,” she says.

“We’re losing farms by the boatload,” she says. Indeed, when Roger Rainville started milking cows as a boy there were more than six thousand dairy farms in Vermont. Today, 652 remain. They still contribute about two-thirds of Vermont’s farm sales—and dairy farmers manage some eighty percent of the state’s much-loved open farm land, the foundation of Vermont’s tourism and recreation economies. But only twenty percent of that land is conserved. “Farming in general is undervalued in our society—but especially in this environmental conversation,” says Darby. “With climate change and all kinds of global troubles, how do you feel about having most of our food come from California or just three companies?”

Heather Darby gets up and goes across the room to help John Tiffany enter data from his soil tests. He’s twenty-three, and he and his wife just bought a herd of thirty-one organic dairy cows in Fairfax. “This is our first year shipping milk,” he says, looking out from beneath the blue visor of a New Holland Agriculture hat. “I grew up on a farm. It’s always what I’ve wanted to do.”