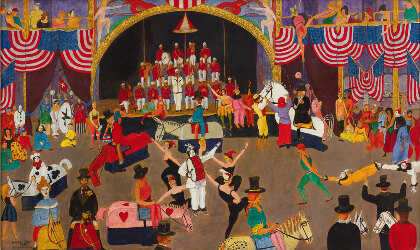 BURLINGTON, VT -  In a grand hall bedecked with flags and murals, costumed revelers perform a choreographed skit around a giant papier-mâché bird. Pioneering modern artists ride hobbyhorses, practice silly dances, wear clown makeup, party on the deck of a ship, and lounge together by a Maine lake. They draw and paint together, and they buy and sell one another’s art at festive auctions. This spirited social scene was an important but often-forgotten feature of the New York art world of the 1910s, ’20s, and ’30s. In the Fleming Museum exhibition, Let’s Have a Ball! Wood Gaylor and the New York Art Scene, 1913–1936, viewers can discover these events as they were lovingly documented in the vibrant paintings of Wood Gaylor (1883–1957).

Let’s Have a Ball is one of three unique but equally compelling exhibitions opening at the Fleming Museum of Art this winter. Joining the colorful paintings of Wood Gaylor is the exhibition Warp, featuring the elaborate, contemporary rugs crafted in Afghanistan as an artistic response to seemingly endless conflicts that have shattered the region. Lastly, a student-curated installation of animal-related objects selected from the Fleming’s permanent collection will be on view in the alcove in the European/American gallery and focuses on the ways that animals inhabit artists’ imaginations in cultures around the globe.

American artist Wood Gaylor was a prime mover in the modern art world from the teens to the thirties, but has not received the attention either his role or his work merits. Curated by Fleming curator Andrea Rosen in consultation with independent art historian Dr. Christine Isabelle Oaklander, this exhibition and accompanying catalogue spotlight Gaylor’s social and artistic contributions to American modernism in the early twentieth century. Gaylor’s paintings, teeming with color and action, depict the spirited gatherings of modern artists and arts promoters. Gaylor was a member of an irreverent group called The Penguin, led by painter Walt Kuhn, which mounted elaborate costume balls and parties complete with comic performances that were the subjects of Gaylor’s most extravagant paintings.

This exhibition is accompanied by the catalogue Wood Gaylor and American Modernism, 1913-1936, which will feature essays by Rosen and Oaklander, as well as an interview with the artist’s son Wynn Gaylor. The exhibition will travel to the Ogunquit Museum of American Art, Ogunquit, Maine, July 31–October 31, 2020, and the Heckscher Museum of Art, Huntington, New York, February 20–May 20, 2021.

In the East Gallery this Spring, we host the powerful and thought-provoking exhibition Warp: War Rugs of Afghanistan. Since the Soviet invasion of Afghanistan in 1979 and continuing today, traditional Afghan rug weavers have incorporated stylized representations of political figures, Kalashnikovs, flags, maps, architectural landmarks, tanks, drones, and ammunition amid colorful floral and geometric patterns—designs reflecting a reality familiar to multiple generations in this war-torn region. In 1971, the Italian conceptual artist Alighiero Boetti (1940-1994) began commissioning Afghan women to produce his now-famous series of map textiles originally inspired by his collected newspaper illustrations of the 1967 Arab-Israeli Six-Day War. Years later, during the Soviet invasion and rise of the US-backed Mujahideen, numerous war rug artists began to portray political maps of Afghanistan and neighboring regions overlain with representations of munitions, soldiers, fighter jets, and historical people and events. These and other iconographies are lifted from Western propaganda materials, sourced from major media outlets, and culled from personal experience. This exhibition presents a selection of rugs that simultaneously document the history of a region while standing as a complicated testament to a still viable expressive and contemporary artistic tradition impacted by unusually diverse economic and political pressures. This exhibition is organized for tour by the Gund Gallery at Kenyon College and made possible, in part, by contributions from the Gund Gallery Board of Directors and the Ohio Arts Council.

Our third installation this Spring, Animal Transformations, displays an array of animal-related objects selected by students from the Fleming’s extensive art and anthropological collections. Led by Professor Jennifer Dickinson and Manager of Collections & Exhibitions Margaret Tamulonis, the University of Vermont’s Spring 2019 Museum Anthropology class (ANTH 250) took on the topic of human/animal relations while working with the Museum’s collections. The students worked closely with objects from the Fleming’s collections, deciding which would best represent the spectrum of ways cultural meanings come alive through animal objects. Throughout the process of creating the exhibition, students wrestled with overarching themes while also learning from museum staff what is required behind the scenes to bring an exhibition together. Animal Transformations reflects the many roles the animal kingdom plays in human-made objects, fulfilling a variety of purposes, from the utilitarian to the symbolic, the everyday to the extraordinary. Through this exhibition, the curators hope to give visitors a window into the many ways humans have transformed animal materials and imagery, in the installation itself and in new labels in other Museum galleries that invite visitors to find animal transformations around them.

An exciting schedule of programs and events accompanies the exhibitions on view this winter and spring, including a festive opening reception on Friday, February 7. Tours of the exhibitions will be offered starting at 4:30pm; followed by a costume art ball inspired by the works and lifestyle of Wood Gaylor. The event is hosted by UVM Provost Patricia Prelock, Fleming Director Janie Cohen, and the Fleming’s Board of Advisors, and will feature live music and period cocktail bar.

The University of Vermont’s Fleming Museum of Art serves as a gateway for active cultural exchange and critical thinking and has presented diverse artistic traditions for over 85 years. The Museum is Vermont’s premier public showplace for exhibitions, education, and scholarship about local and world cultures, both historical and contemporary. For more information regarding the Fleming Museum’s exhibitions, programs, and location call (802) 656-0750 or go to the Fleming Museum website at www.flemingmuseum.org.

The Fleming Museum is deeply grateful to Bernard Goldberg Fine Arts, LLC, for the generous support of the Wood Gaylor exhibition and the accompanying catalogue. Additional support for this exhibition is provided by the Kalkin Family Exhibitions Fund; the Walter Cerf Exhibitions Fund; and Mary Jane Dickerson, Peter and Isabella Martin, and Caroline Wadhams Bennett in memory of J. Brooks Buxton.

Chris D. Dissinger
American artist Wood Gaylor was a prime mover in the modern art world from the teens to the thirties, but has not received the attention either his role or his work merits. 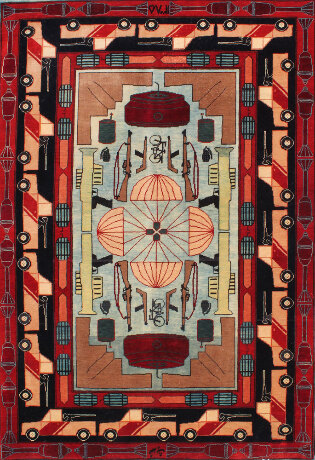 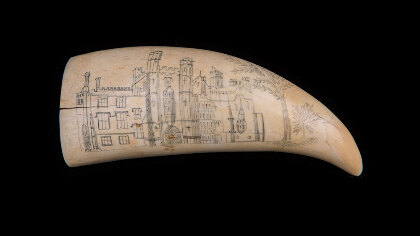