Acid rain was first detected as a serious environmental problem in the late 1960s. Emissions of sulfur dioxide (SO2) and nitrogen oxides (NOX) react with water, oxygen, and other chemicals in the atmosphere to form sulfuric and nitric acids. Resulting hydrogen ions in acid rain leach plant-necessary cations (e.g., calcium, magnesium, potassium, phosphorus) from the soil and into water bodies, and make toxic cations, like aluminum, more available. Such changes have been shown to negatively affect many aspects of ecosystem health, from trees to soil microorganisms. 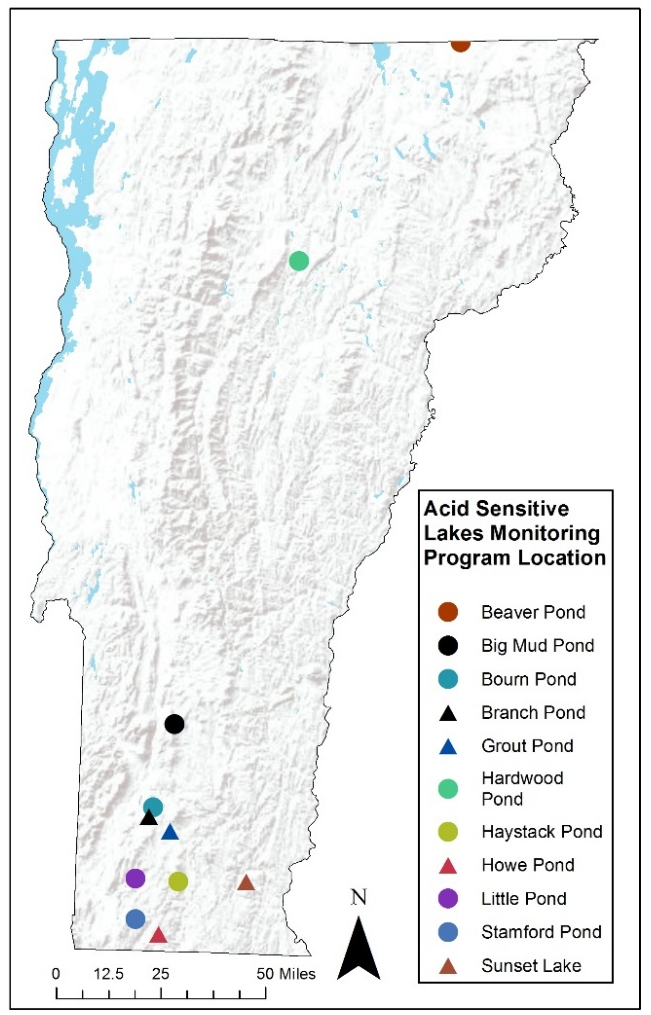 Figure 37. Locations of lakes/ponds in the Acid Lakes Monitoring Program in Vermont.

When high-elevation lakes in geologically sensitive areas were becoming acidified, the Environmental Protection Agency (EPA) enacted the Acid Lakes Monitoring Program, under the Long-Term Monitoring Program (LTM). In Vermont, monitoring, analysis and reporting is conducted by the Department of Environmental Conservation (DEC), in partnership with FEMC. 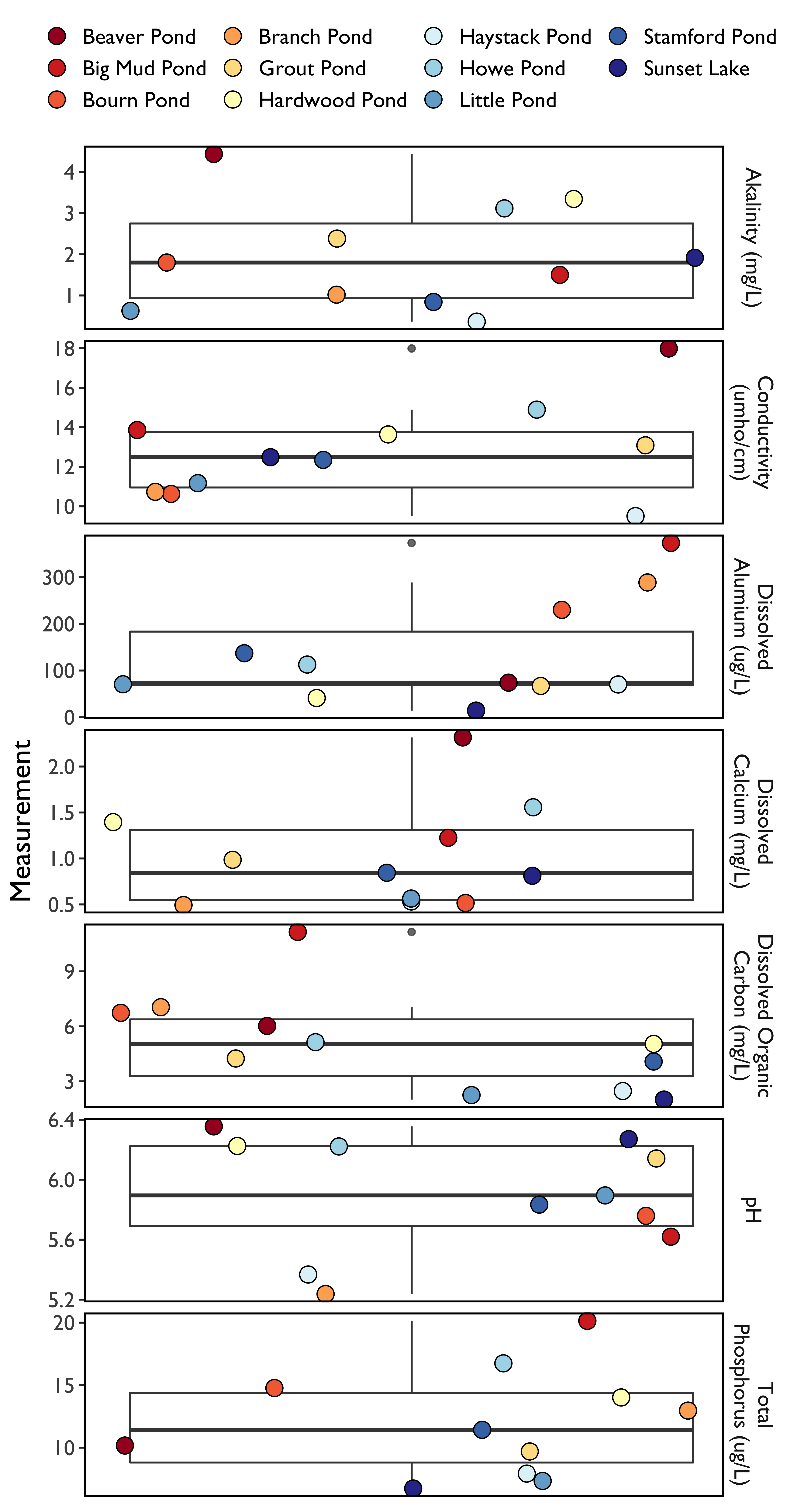 Figure 38. 2018 water quality measurements. Boxplot around points shows the mean (bold horizontal line) and extreme values (above or below vertical lines on top/bottom of box). Colors correspond to the 11 Acid Lakes in the monitoring program.

In 2018, we saw a range of values for water quality measurements in the 11 lakes and ponds in the Acid Lakes Monitoring Program (Figure 37) which reflects the variability in the different water bodies and in the parameters measured.

Average pH was 5.90 in 2018, which is slightly lower than the average value in 2017 (5.92). Reductions in aluminum are a good indicator of improving water quality, but mean dissolved aluminum across all sites has been increasing for the past three years, with 93.5 ug/L being recorded in 2016, 122.1 ug/L in 2017, and 134.42 ug/L in 2018. It should be noted that, like in 2017, dissolved aluminum concentrations were highly variable, with mean values recorded at the 11 Acid Lakes ranging from a high of 373.5 µg/L at Big Mud Pond to a low of 14.1 µg/L at Sunset Lake. This variation is likely due to a number of factors, including deposition received, water depth, bedrock, and surrounding conditions.

Average phosphorus concentration was 12.0µg/L, which is slightly lower than it was in 2017 (14.0 µg/L). Dissolved organic carbon is a broad grouping of organic molecules resulting from decomposing organic matter. It is not only a food source for aquatic microorganisms, but is an indicator of terrestrial health. In 2018, the mean value (1mg/L) which represents no change from 2017 (5.1 mg/L).

The data from the 11 Acid Lakes demonstrate that acid accumulation and cation leaching has declined over the long-term record (1980-2018). Increases in 2018 compared to 2017 in alkalinity and pH are both indicative of an increasing trend observed over the measurement period (Figure 39). Concurrently, conductivity (a measure of the electrolyte concentration), dissolved aluminum, and dissolved calcium are still showing a decreasing trend despite increases in 2018.

Dissolved organic carbon (DOC) has been increasing since it was first measured in the early 1990s, although there is more variability among the 11 Acid Lakes for DOC compared to other measured variables, as indicated by the size of the confidence intervals around the average (Figure 39).

Phosphorus, limits primary production in most lakes and excessive concentrations can lead to algal blooms, as has been observed in Lake Champlain. Historical patterns in total phosphorus show considerable variability, but concentrations have decreased from a peak in 2008 (Figure 39). Overall, the phosphorous values measured in the Acid Lakes are below the threshold for negative impacts.

Globally, northern hemisphere, lakes have been undergoing a “browning” effect due to increases in DOC.  At the same time, the most pristine oligotrophic lakes have been seeing an increase in phosphorus, or a “greening” effect (Stoddard et al. 2016).  Overall, Vermont’s acid lakes are following this same trend.

Similar trends in pH and dissolved cations are evident across the region. These long-term data are evidence that ecosystem recovery has begun following the Clean Air Act and subsequent amendments, which have substantially reduced deposition of sulfur and nitrate – two components that react in the atmosphere to produce acid rain.

Because acid rain was first discovered in the mid-1960s, we lack records of water quality prior to acidification. As a result, it is uncertain what parameter values designate full ecosystem recovery. Furthermore, acid rain has not completely vanished, as we are still seeing deposition of sulfur and nitrogen on the landscape. Despite this uncertainty, the recovery of our lakes and ponds, compared to values in the 1980s, supports the effectiveness of regulation to combat acidic pollutants, and continued monitoring to help protect our valuable resources. Moving forward, as the threat of acid rain declines, other types of pollutants, such as phosphorus loading in our large water bodies, are becoming more problematic. 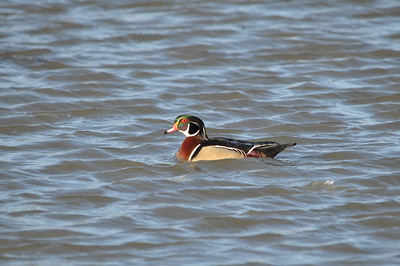 Special thanks to Heather Pembrook and Bruce Forsberg from the Vermont Department of Environmental Conservation for reviewing and editing the Water Quality Section of the 2018 FEMC Long-Term Monitoring Update.