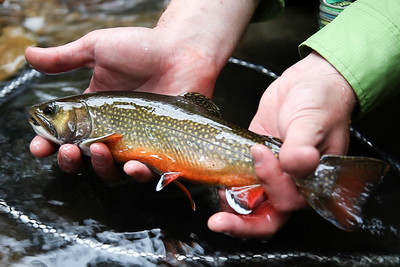 The brook trout Salvelinus fontinalis is native to Vermont and widely distributed in cold-water streams throughout the state.  These populations are often considered an indication of healthy ecosystems due to their stringent water quality and habitat requirements. In addition to their ecological value, brook trout are a favorite among Vermont anglers.

The Vermont Fish and Wildlife Department has monitored wild brook trout populations in the West Branch of the Little River and Ranch Brook since 1997. While this evaluation initially focused on the potential effects of ski area development and snowmaking water withdrawals on brook trout populations, these data also provide valuable insights into the effects of broader environmental variables over the long term.

Trout captured during stream surveys were measured to the nearest millimeter and weighed to the nearest gram.  Population estimates within each sampling station were based upon the removal method and determined by the maximum weighted likelihood method developed by Carle and Strub (1978).  Population estimates were calculated for each of two age classes, (1) yoy and yearlings and (2) older fish greater than 1 year in age (1++) distinguished by length distribution.  The population estimates were standardized to represent number per mile (#/mi) for each age class and summed for the total brook trout population within each station (Table 6). Live brook trout biomass (lbs/acre) was also calculated at each station (Table 6).

Table 6. Population estimate (#/mile) and biomass (lbs/acre) of brook trout for each age class (YOY combined with yearling and older fish (1++) at each monitoring station in 2018 and compared to the long-term mean (1991-2018). ‘Dif’ column indicates the difference between 2018 and the long-term mean, with red values showing a decline (one standard deviation away from the long-term mean), blue showing an increase, and no color indicates change that is within one standard deviation of the mean. Note that population estimates were not conducted at the 1440’ West Branch Station in 2018. 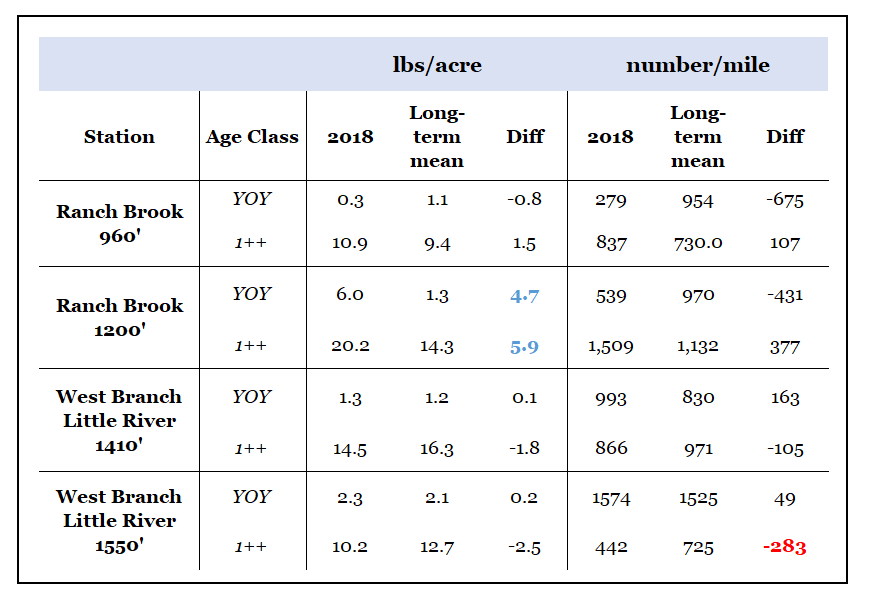 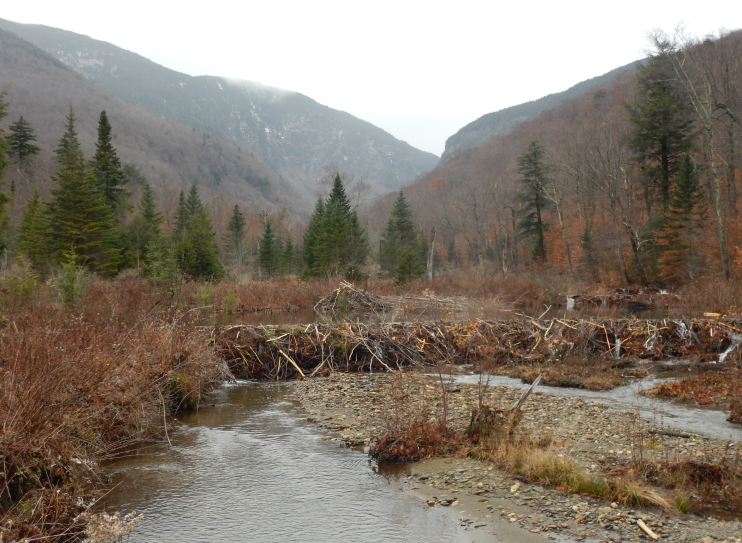 Beaver Pond complex immediately upstream of the sampling site on the West Branch of the little river at 1550 ft.

West Branch and Ranch Brook supported high quality brook trout populations maintained through natural reproduction. These populations consist of multiple age classes and average over 1760 trout per mile over the 22-year study.  Wild brook trout populations vary considerably among and within streams due to differences in habitat conditions and localized land use effects while broad environmental variables may have significant temporal effects.  While large fluctuations were observed for each age class, both within and among the two study streams, no clear trends were evident.

Annual brook trout yoy production showed clear highs and lows, often consistent across the 4 stations and two study streams, suggesting the effect of broad environmental influences.  Successful recruitment of yoy requires suitable habitat conditions over an extended period of time including fall spawning, overwinter incubation and spring emergence.  In some years peak yoy production was followed by commensurate increases in the yearling and older population, such as those observed in 1999-2000 and 2012-2013.  Yearling and older brook trout populations tend to be more stable and are able to quickly recover following extreme events. For example, very high flow events in the summer of 2010 and spring 2011 may have contributed to the yearling and older brook trout declines observed in some stations but these populations rebounded to above average levels by 2013. 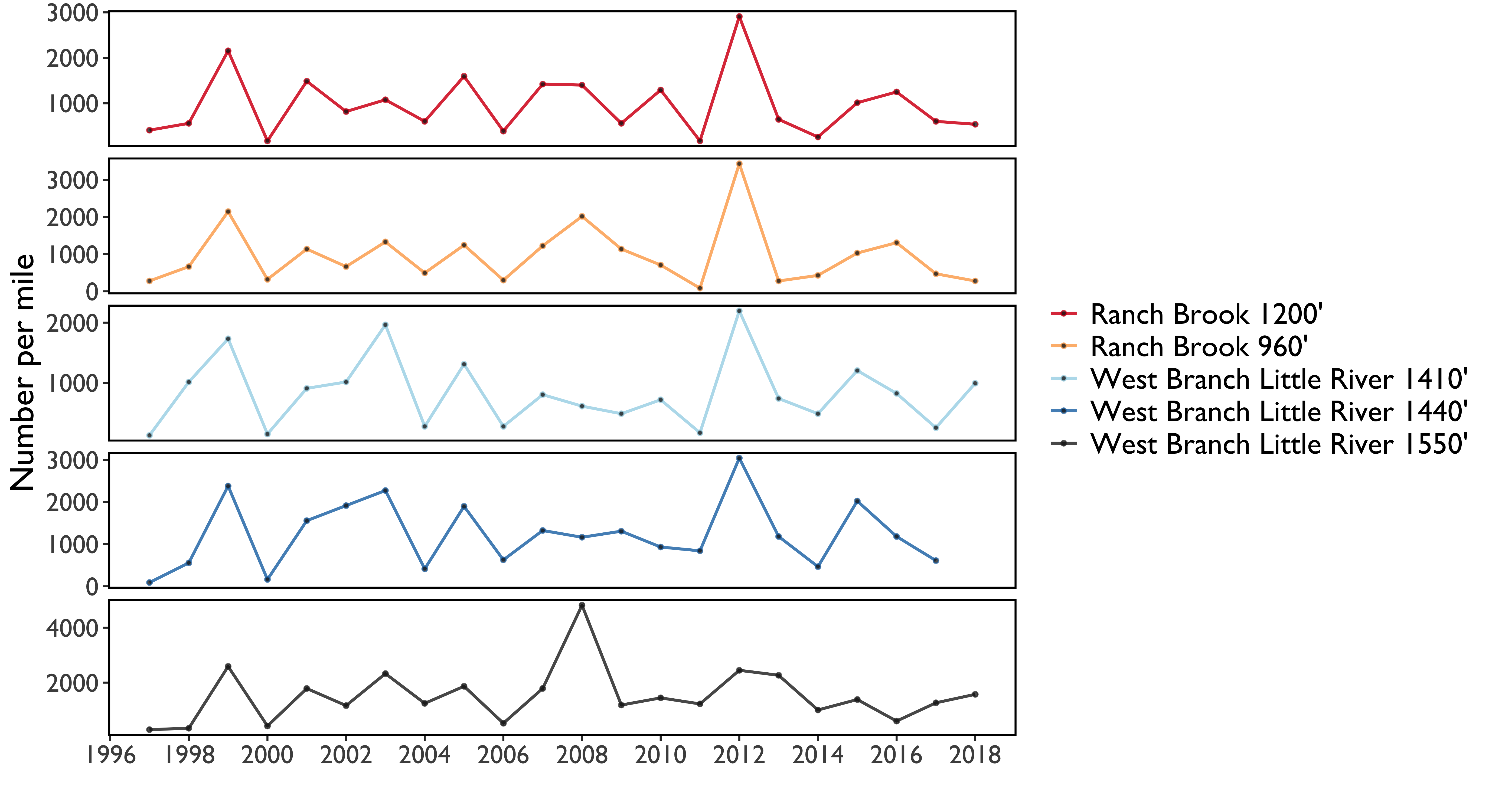 Figure 20. Vermont Department of Fish and Wildlife trout surveys: Young of year (yoy) expressed as number per mile, from 1997 through 2017. 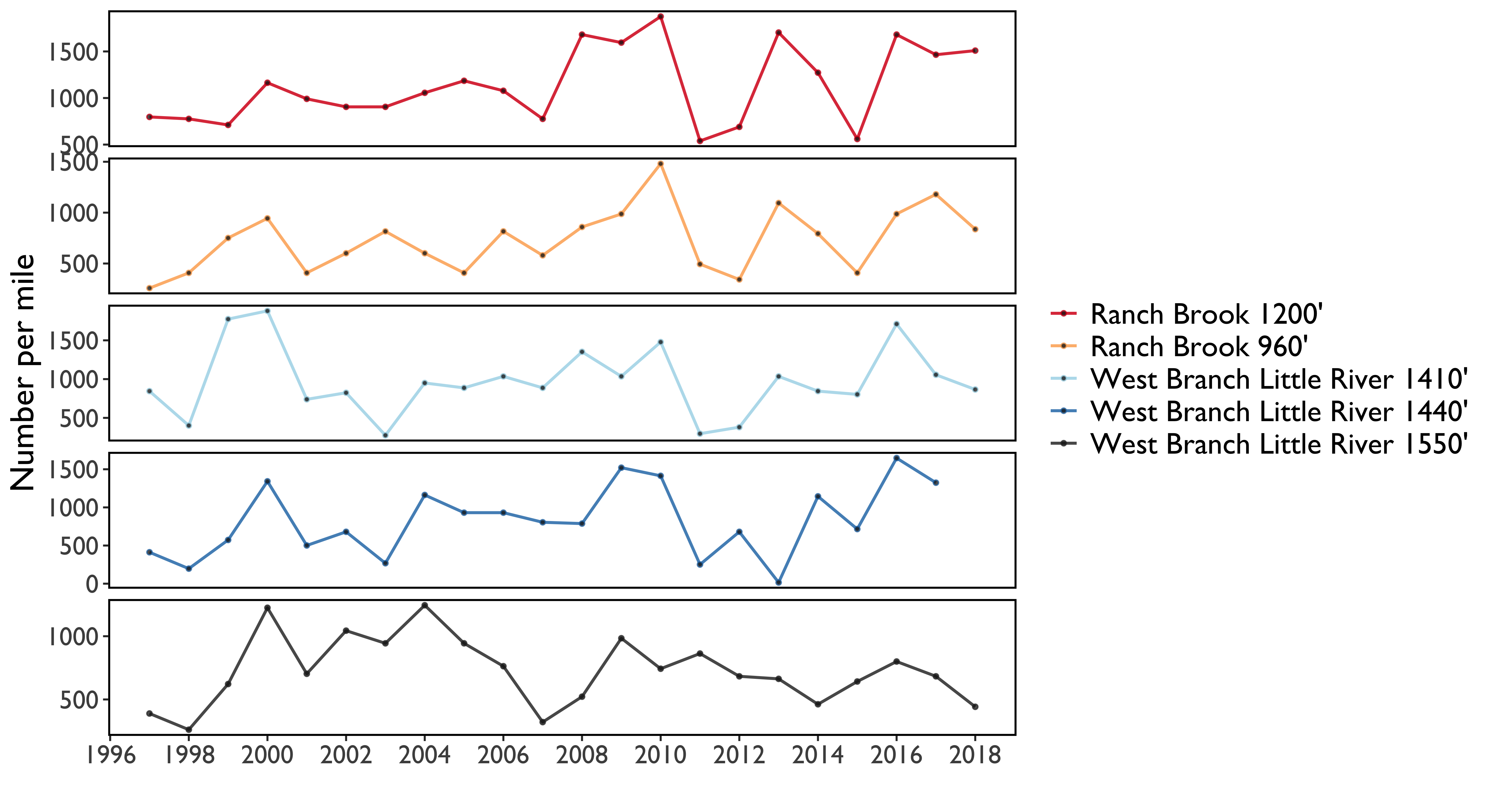 Figure 21. Vermont Department of Fish and Wildlife trout surveys: Yearlings and older fish, expressed as number per mile, from 1997 through 2017.

Global climate change predictions suggest a continued loss of brook trout populations throughout their range due to increases in stream temperature and flood frequency.  Forested watersheds and riparian areas will be critical for the long-term persistence of Vermont’s wild brook trout populations, as they serve to moderate water temperatures and streamflow, filter and retain sediments and nutrients, contribute and retain large wood and organic matter, stabilize streambanks and floodplains and provide for complex and diverse aquatic habitats.  Improving aquatic passage through the elimination of constructed barriers (e.g. culverts, weirs and dams) will also help ensure brook trout are able to access critical habitats and recover from extreme natural events which reduce population levels. 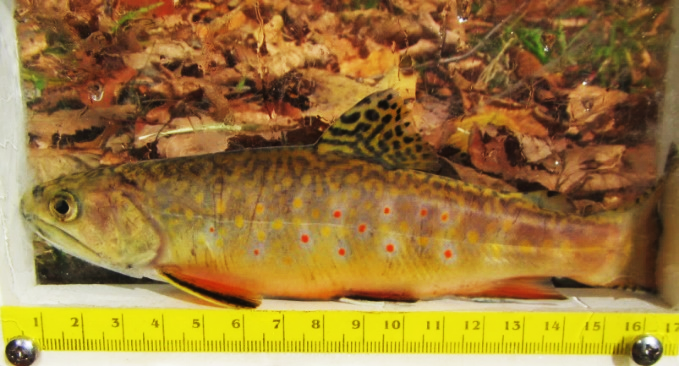 The predicted climate change has induced an increase in flood frequency and stream temperatures which does do not bode well for brook trout populations.

Wild Brook Trout Monitoring in the West Branch of the Little River and Ranch Brook https://www.uvm.edu/femc/data/archive/project/Wild-Brook-Trout-Monitoring-in-the-west-Branch-of-the-little-river-and-ranch-brook