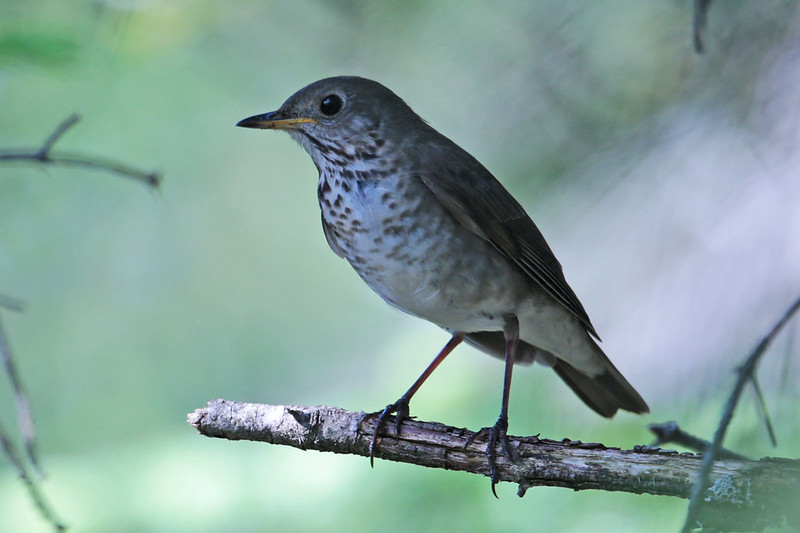 Demographic monitoring uses mist-netting and banding techniques at an established study plot on the Mt. Mansfield ridgeline between 1155-1190 m (3800-3900 ft) elevation. Every year, typically between the end of May and the beginning of August, 10–30 nylon mist nets are placed at sites that have been used annually since 1992. Each captured individual is fitted with a uniquely-numbered leg band and the appropriate data related to age, sex, breeding condition, and bird health are recorded.  Other standard metrics including wing chord, tail length, weight, and tarsal length are also recorded. Additionally, a small blood sample was obtained from Bicknell’s Thrushes for long-term monitoring of mercury burdens.

Each study site contains five-point count stations. Survey methods include unlimited distance point counts, based on the approach described by Blondel et al. (1981) and used in Ontario (Welsh 1995). Counts begin shortly after dawn on days where weather conditions are unlikely to reduce count numbers. Observers record all birds seen and heard during a 10-minute sampling period, divided into 2-, 3-, and 5-minute intervals.

Demographic work using netting and banding methods continued in 2018 along the Mt. Mansfield Ridgeline for the 27th consecutive season. In 2018, there were a total of 431 mist net captures, which comprised of 321 individuals of 30 species, including 275 new bandings, 48 returns from previous years, and 54 within-season recaptures.

Point count surveys at the mid-elevation, northern hardwood study sites at Underhill State Park and Lye Brook Wilderness showed similar species composition, with a total of 51 and 49 species detected over all survey years, respectively. In 2018, the number of individual birds and species richness increased at both UNSP and LBWA, although the long-term trends for both of these metrics continue to decline (Figure 232).

Mt. Mansfield Ridgeline – In 2018 there were 431 bird captures comprising 321 individuals of 30 species, including 275 new bandings, 48 returns from previous years, and 54 within-season recaptures. Blood samples were collected from 23 Bicknell’s Thrushes, as part of our long-term monitoring of avian mercury burdens on Mt. Mansfield. Anthropogenic input of mercury into the environment has elevated risk to fish and wildlife, particularly in northeastern North America.  Recent sampling of Bicknell’s and Swainson’s Thrush (2014–2017) allowed for a comparison of blood mercury burdens in these two thrush species. Combining thrush data with atmospheric wet mercury deposition data collected at the Proctor Maple Research Lab (PRML) from 1993–2016, the Vermont Center for Ecostudies published a peer-reviewed paper in Ecotoxicology during 2019 (Rimmer et al. 2019). Among its findings, this publication documented (1) no differences in blood mercury concentrations between the two thrush species, (2) no detectable changes in Bicknell’s Thrush blood mercury burdens from 2000–2017, and (3) no relationship between atmospheric deposition at PMRL and thrush blood mercury concentrations.

Underhill State Park – Total number of individuals and species richness increased from 2017, with 69 individuals of 19 species recorded, including six Dark-eyed Juncos, the most in the count’s history. Among the nine most common species, six were above the 27-year mean, and three were below. Overall, counts of Black-throated Blue Warbler and Hermit Thrush were the same as 2017, continuing the relatively flat long-term trend for Hermit Thrush, Vermont’s State bird (Figure 23). Additionally, the number of Ovenbirds increased to 15 individuals, matching the site’s highest count from 2007, while the count of Black-throated Green Warblers dropped slightly (Figure 23). These results echo the broader, 25-year trends observed for these three species in the state-wide Vermont FBMP dataset, in which both Black-throated Green Warbler and Ovenbird significantly increased, while Hermit Thrush showed no trend (Faccio et al. 2017). A single Canada Warbler was again detected in 2018, although this species is declining at a rate of 3.93% annually   ( = 0.604) and shows the strongest decline among the nine most commonly detected species.

Lye Brook Wilderness Area – Both relative abundance and species richness rebounded slightly in 2018, after reaching near-record or record lows, respectively, in 2017 (Figure 24). Among the nine most common species, six were below the 17-year mean, with only Red-eyed Vireo, Blue Jay, and Ovenbird above the long-term average. The count of Black-throated Blue Warblers dropped for the second consecutive year in 2018, continuing the species’ moderate decline (-2.18% per year, = 0.225) (Figure 24). However, Red-eyed Vireo numbers remained stable, continuing a strong upward trend that increased by 5.37% annually (= 0.277) (Figure 24), mirroring the significant state-wide trend exhibited by VCE’s 25-year study (Faccio et al. 2017). 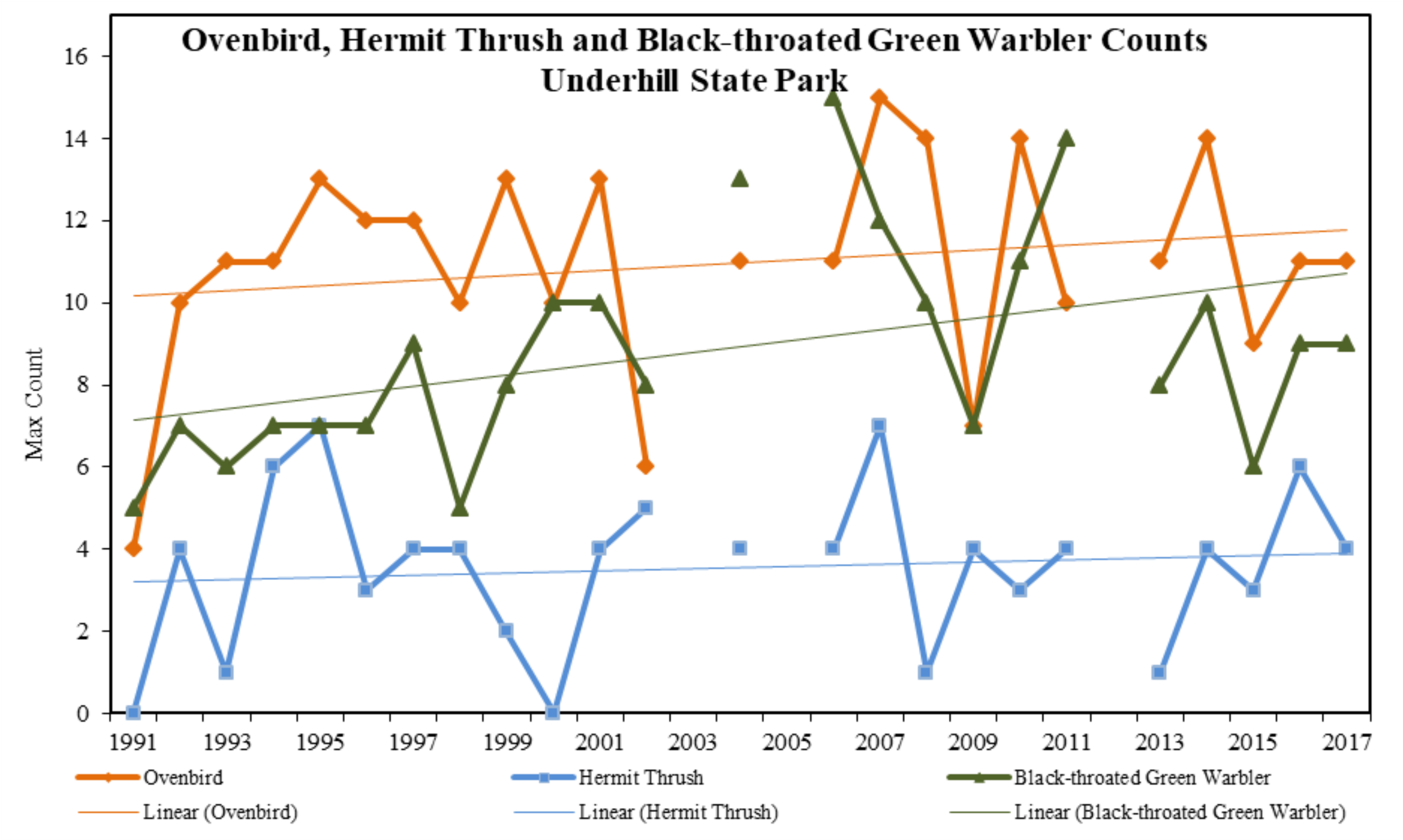 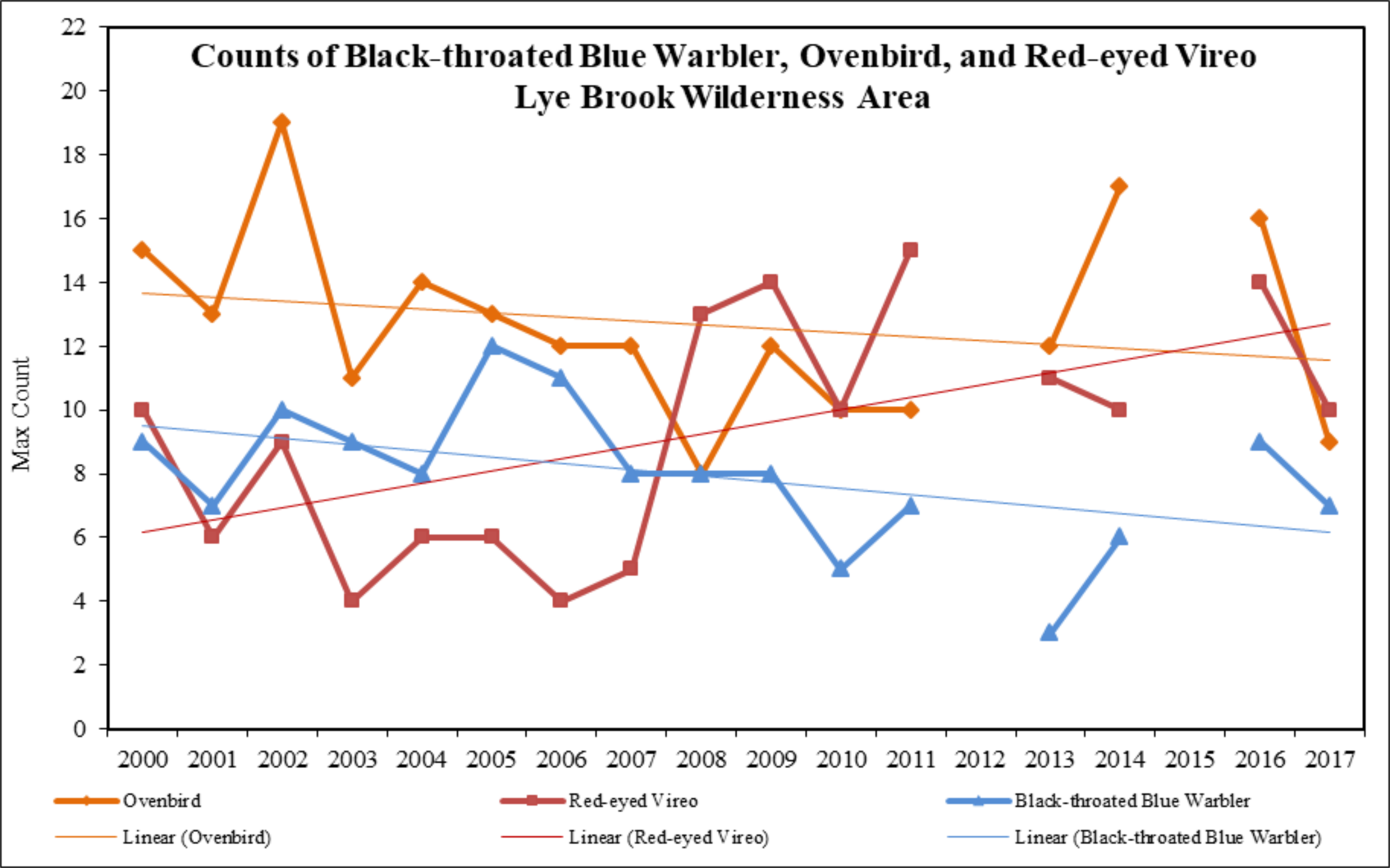 Long-term trends of forest birds at both UNSP and LBWA suggest that the relative abundance of the total number of birds detected has declined slightly over the survey period. However, it should be noted that site-specific trend estimates must be interpreted with caution, as these data are from a limited geographic sample and can be greatly influenced by years with extreme high or low counts. Also, year-to-year changes in survey counts may simply reflect natural fluctuations in abundance, differences in detection rates of observers and/or species, variability of singing rates due to nesting stage, and/or a variety of dynamic factors, such as predator or prey abundance, overwinter survival, effects of diseases such as West Nile Virus, and local habitat change.

Not surprisingly, most of the strongest population trends observed at both study sites–including the increasing trends of Black-throated Green Warbler at UNSP and Red-eyed Vireo at LBWA, and the declining trend of Canada Warbler at UNSP–reflect the broader state-wide trends for these species during the 25-year study of the Vermont Forest Bird Monitoring Program (Faccio et al. 2017).

It is unknown which of the many anthropogenic stressors (e.g., habitat degradation and loss due to development, land use change, acid precipitation and other atmospheric pollutants, or changing climatic conditions) may be contributing to these population trends, but it is likely all have had impacts. In addition, migratory species, whether short- or long-distance Nearctic-Neotropical migrants, have declined across Vermont forests, while year-round residents showed no trend (Faccio et al. 2017). This suggests that migratory species face additional limiting factors, both on their wintering grounds and during migratory stopovers, that could be impacting populations. Continued data collection and comparison with survey data from other ecologically similar sites will be necessary to fully elucidate population trends of various species at these sites. 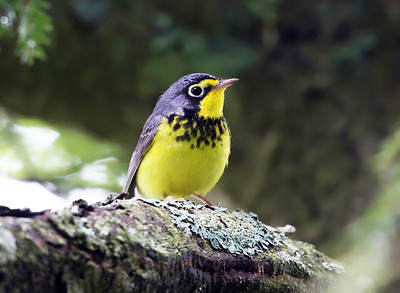 These changes mirror findings statewide, and could represent the influence of many anthropogenic stressors and/or natural factors.