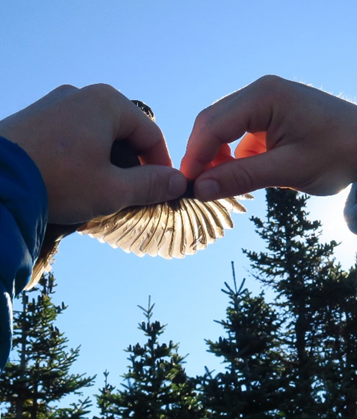 Vermont Center for Ecostudies volunteer checks for ectoparasites as part of the metrics gathered during banding.

Also in 2016, VCE initiated a complementary study to monitor phenological mismatching between insectivorous songbirds and the arthropods upon which they feed. Birds, especially long-distance migrants, may be particularly vulnerable to this phenomenon. Their primary prey reach peak abundance earlier in warm years, but the annual cycle of birds is governed by photoperiod, which is unaffected by climate change. Birds may thus return from wintering grounds relatively late, miss the peak abundance of key prey species, and raise fewer young. Evidence that phenological mismatches are becoming widespread is meager. In 2016, VCE began to examine several key assumptions of this hypothesis on the Mount Mansfield ridgeline by monitoring the phenology of a mountain ecosystem at three trophic levels — plants, arthropods, and insectivorous birds — and to document how phenology is affected by local weather conditions, in order to provide insight into the link between climate and phenology.

Regular monitoring is essential to assess trends in species presence, species richness, population levels, and demographics. With the addition of phenological information, improved understanding can inform conservation strategies. Such information is critical to the protection of sensitive species, such as Bicknell's Thrush.

Mist-netting and banding were used to monitor breeding birds on an established study plot on the Mt. Mansfield ridgeline between c. 1155-1190 m elevation. On 20 days between 19 May and 14 September 2016, using 10-30 nylon mist nets (12 x 2.5-m and 6 x 2.5-m, 36-mm mesh) placed at sites that have been used annually since 1992. Nets were generally opened from late afternoon until dusk and from dawn until late morning on the following day. Individuals were fitted with U.S. Fish and Wildlife Service leg bands and data were recorded on age, sex, and breeding condition. VCE accumulated 2,172 net-hours in 2016, with a mean of 108.6 ±60 SD net-hours per day. A total of 512 captures included 392 individuals of 30 species, for a capture rate of 18 new birds/100 net-hours.

Mt. Mansfield Ridgeline – VCE has captured 316 adult Bicknell's Thrushes since 1992, 113 of these individuals in multiple years. The oldest known thrushes were a male and female, both aged as after-second-year when captured, making them at least 10 years old when last recaptured.

Underhill State Park – Total number of individuals and species richness increased from 2015, with 57 individuals of 20 species recorded, including a Ruby-crowned Kinglet and Yellow-bellied Flycatcher, both new for the survey. Among the nine most common species, only four were above the 25-year mean, and five were below. Overall, counts of Ovenbird and Black-throated Green Warbler increased; while the long-term trend for Hermit Thrush, the Vermont state bird, remained relatively flat (Figure 23). These results echo the broader, 25-year trends observed for these three species in the statewide Vermont FBMP dataset, in which both Black-throated Green Warbler and Ovenbird significantly increased, while Hermit Thrush showed no trend (Faccio et al. 2017). A single Canada Warbler was detected in 2016, the first since 2013; this species is declining at a rate of 4.36% annually (r2=0.668), representing the sharpest decline among the nine most commonly detected species. 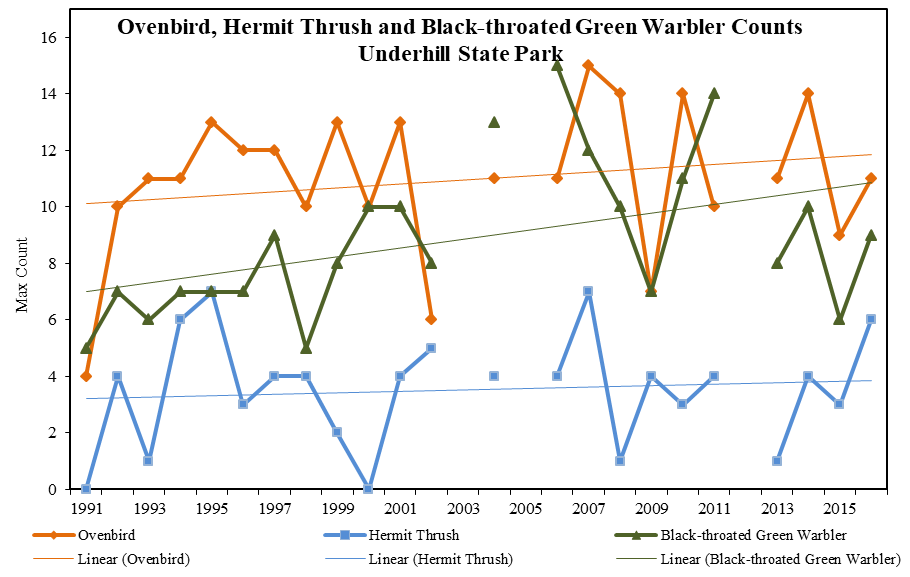 Lye Brook Wilderness Area – Both relative abundance (n=74) and species richness (n=19) increased to the second highest in the survey's history, and were both well above the 15-year means of 62.4 and 16.1, respectively. Among the eight most common species, all but Pileated Woodpecker were above the 15-year average; however, only Red-eyed Vireo, Yellow-bellied Sapsucker, and Black-throated Green Warbler exhibited increasing population trends. While numbers of Black-throated Blue Warbler increased for the second straight year from a record low of just three individuals in 2013, the species' long-term trend showed a moderate decline of -2.25% per year (r2 = 0.227) (Figure 24). Counts of Red-eyed Vireo showed a strong upward trend (Figure 24), increasing by 8.76% annually (r2 = 0.358), mirroring the significant statewide trend exhibited by VCE's 25-year study (Faccio et al. 2017). 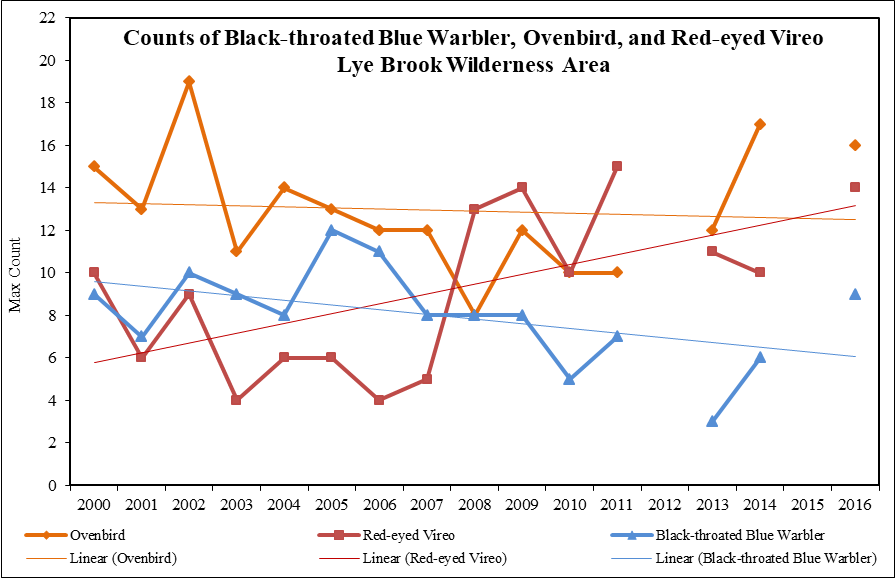 Long-term trends of forest birds at both UNSP and LBWA suggest that the relative abundance of the total number of birds detected has declined slightly over the survey period. However, it should be noted that site-specific trend estimates must be interpreted with caution, as these data are from a limited geographic sample and can be greatly influenced by years with extreme high or low counts.

Not surprisingly, most of the strongest population trends observed at both study sites—including the increasing trends of Black-throated Green Warbler at UNSP and Red-eyed Vireo at LBWA, and the declining trend of Canada Warbler at UNSP—reflect the broader state-wide trends for these species during the 25-year study of the Vermont Forest Bird Monitoring Program (Faccio et al. 2017).

The phenology study initiated by VCE in 2016 will shed light on the impact of climate change on migratory birds but they still face challenges from other anthropogenic stressors. Among these are habitat degradation and loss due to development, land use change, acid precipitation and other atmospheric pollutants. In addition, migratory species, whether short-distance or long-distance Neotropical migrants, have declined across Vermont forests, while year-round residents showed no trend (Faccio et al. 2017). This suggests that migratory species face additional limiting factors, both on their wintering grounds and during migratory stopover that could be impacting populations. Continued data collection and comparison with survey data from other ecologically similar sites will be necessary to fully elucidate population trends of various species at these sites. 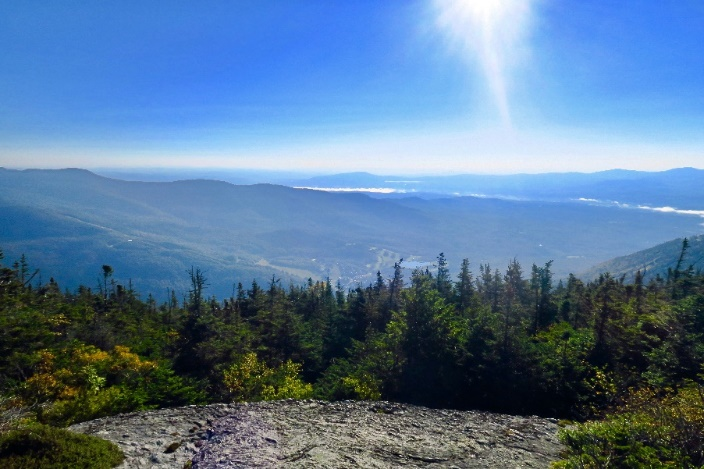 Conservation groups are mobilizing knowledge to increase the Bicknell's Thrush population across its migratory range. Land management, local conservation of critical habitats, controls on pollution, and the recognition that this species is a bellwether of climate change lend hope of a brighter future for this intriguing, but globally vulnerable songbird.