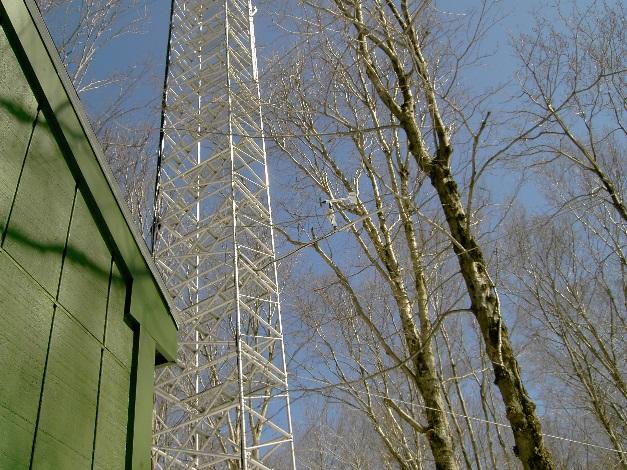 The VMC takes meteorological measurements at 0.5, 7.5, 17, and 24 meters above the forest floor at 1300' at the canopy research tower at the Proctor Maple Research Center in Underhill, VT.

The Vermont Monitoring Cooperative (VMC) has been monitoring weather conditions in Vermont for over 20 years. VMC currently operates seven meteorological stations across a range of elevations and cover types, maintaining real-time data streams and archiving of long-term data.

Weather and climate are related but very different phenomena, weather being the condition of the atmosphere (precipitation, temperature, etc.) over the short term, while climate refers to longer-term trends and seasonal patterns. Without long-term weather records it would be impossible to tease out short term (i.e. yearly) anomalies from more ecologically significant climate trends, which makes this information critical to scientists and planners of all kinds. One of the complexities of climate analyses is the high degree of both temporal and spatial variability. Multiple VMC stations taking continuous measurements allow for the assessment of climate trends and patterns across the landscape.

Continuous meteorological observations are taken at seven VMC sites from the shores of Lake Champlain to slopes of Mt. Mansfield. Variables collected include wind speed and direction, air temperature, relative humidity, barometric pressure, solar irradiance, precipitation, and at Lake Champlain stations, water temperature. These variables are primarily logged as 15-minute averages. The longest record comes from the Mt. Mansfield summit station operated by the WCAX transmitter crew and supervised by the National Weather Service, dating back to 1954. Most of the other stations operated by the VMC began operation in the early to mid- 1990s. 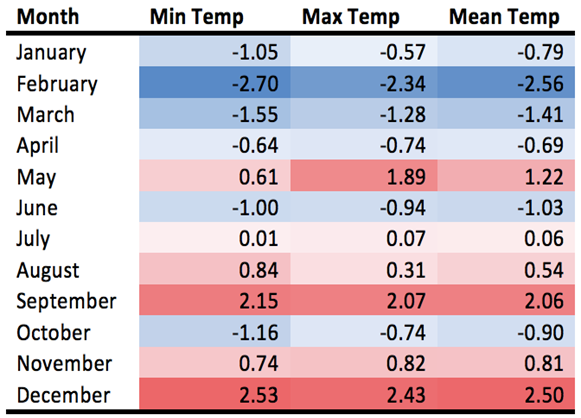 Climate scientists predict that record setting, extreme weather patterns like those witnessed in 2015 will become more common as the earth’s atmosphere becomes more volatile in a changing climate. This trend toward increased variability is also evident in the daily temperature data, with days deviating more than 15 degrees from normal becoming common (Figure 17).

Figure 17. Daily minimum, maximum and mean temperature data for all of 2015 in comparison to the long-term mean (norm).

Based on the daily data between 1997 and 2015, we have seen a consistent (although not significant) rise in mean, max and min daily temperatures (Figure 18). This rise is congruent with regional and national trends (IPCC, 2014; EPA, 2014). The most extreme change is in daily minimum temperatures, up 3 degrees on average over this data record. Most of this increase occurs in the spring and summer on Mansfield, with July reporting the strongest (and only significant monthly) long-term increase in mean temperature (p = 0.03). While 2015 winter temperatures were significantly colder than normal, this was not sufficient to alter these long-term warming trends over the full data record. 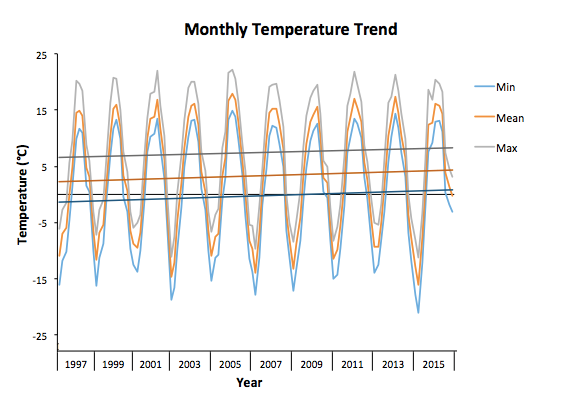 While climate variability is high, both temporally and spatially, meteorological measurements witnessed across the VMC meteorological network are in agreement with regional and national assessments indicating that temperatures have increased over the past several decades (Betts, 2011; EPA, 2014; IPCC, 2014). However, it is not the general warming trends that likely impact forested ecosystems the most. Instead, it is the increased frequency and severity of extreme climate events that are of concern to forest health professionals. The increase in extreme temperatures witnessed in 2015 may be an example of the increase in variability we will continue to see under a changing climate. These extremes represent an additional stress for species adapted to cold weather dormancy, increased risk of winter injury following winter warm spells, and frost damage during spring freeze events. Even when climate conditions remain within a species’ natural tolerance, differences in competitive advantages among species due to phenological changes or erratic and unseasonable temperature fluctuations could alter ecosystem structure and function (Pucko, 2014). Variable temperatures may eventually affect phenological adaptations, potentially increasing vulnerability to insects, diseases, and may have an adverse impact on major agricultural crops in Vermont such as apples and sugar maples (Grubinger, 2011; Rustad, 2012). 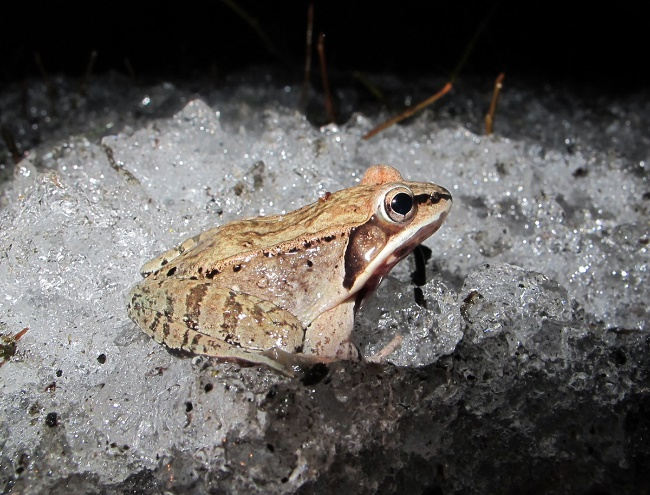 Increased variability of temperatures and an increase in temperature extremes represent additional stress to New England flora and fauna.