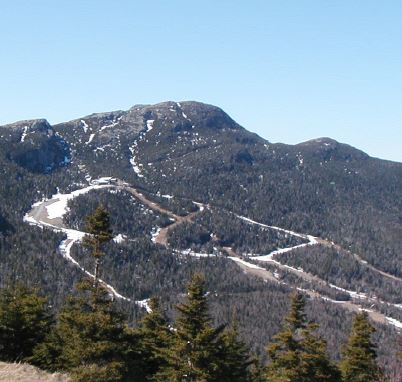 Stream gages at Ranch Brook and West Branch near Stowe, Vermont have been operated continuously since their establishment in September 2000. The gaging was designed as a paired watershed study, with Ranch Brook (9.6 km2) as a relatively pristine, undeveloped, forested control watershed, and West Branch (11.7 km2) as the developed watershed. The basins are adjacent and similar in size, shape, aspect and drainage patterns. Elevation ranges from 415 to 1340 m in the West Branch basin and from 335 to 1173 m in Ranch Brook. West Branch contains nearly the entire expanse of Stowe Mountain Resort. Although the resort was well-established when the gaging began, it underwent a significant expansion during the course of the study. These sites provide needed information on mountain hydrology, and how mountain landscapes respond to development and extreme events.

Supported as a collaboration between the VMC and the US Geological Survey, stream gages on Ranch Brook and West Branch provide continuous monitoring of stream water heights (stage), which are related to discharge (flow) by an empirical rating based on frequent discharge measurements. This information informs the monitoring of long-term hydrology patterns and water quality trends including: baseline conditions, trends in stream acid/base status, cations (Ca, K, Mg, Na, Si), anions (Cl, NO3, SO4) suspended sediment output, snowpack and snowmelt and extreme climate events. These gaging stations provide a watershed framework for other VMC efforts including nutrient cycling, forest health assessments, forest fragmentation and biological monitoring.

Water year (WY) 2014 was a relatively tranquil year hydrologically, although there was one notable peak from a rain-on-snow event on April 15th (Figure 32). Overall, runoff was less than the long-term average (Figure 33).

The WY started off with a dry fall and played "catch up" all year, but in the end fell below average for total runoff. West Branch fell further behind than Ranch Brook due to snowmaking withdrawals in the late fall and first part of winter. Rain and thaws in January brought both sites closer to average. A late snowmelt accompanied by a large rain-on-snow event on April 15th helped bring both sites to near average by the start of summer. But summer 2014 was dry in northern Vermont, leading to a steeper than average summer baseflow recession and an overall below-average flow year. The April 15th event was quite noteworthy as the 4th highest peak at Ranch Brook and 5th highest peak at West Branch over the 14 years of record.

Throughout the 14 years of streamflow monitoring, West Branch has consistently yielded higher runoff (flow normalized to watershed area) than Ranch Brook (Wemple et al., 2007) (Figure 34). Over the long-term, the average difference has been 21% greater runoff at West Branch. In Water Year 2014 the differential was slightly above average at 24% (Figure 34). Greater runoff at West Branch is what we would expect from the development; creation of impervious surfaces (parking lots, buildings), compacted soils (ski trail maintenance), and direct discharge of stormwater tend to increase surface runoff directly to streams at the expense of groundwater recharge, resulting in higher streamflow. Also, removal of trees for trails and development means less water demand by the forest, leaving more water available to run off. Because the ski resort was already in place when the gaging started, we cannot quantify its effect on hydrology. But the high magnitude of the differential suggests that some part of the difference may be natural. For example, there could be greater water input at West Branch due to different precipitation patterns in the two watersheds, snow redistribution, or groundwater input from outside the basin via bedrock fractures. 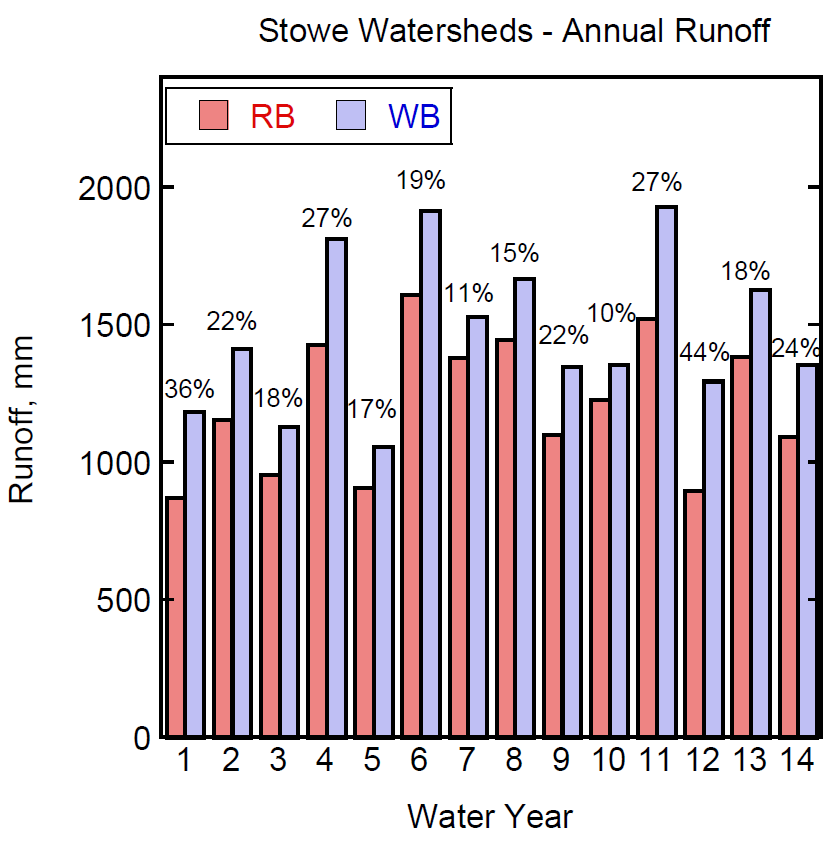 Figure 34. Annual runoff in mm at West Branch (WB) and Ranch Brook (RB) for the duration of study though the present report year. Percentage of greater runoff at WB relative to RB is given over each pair of bars. 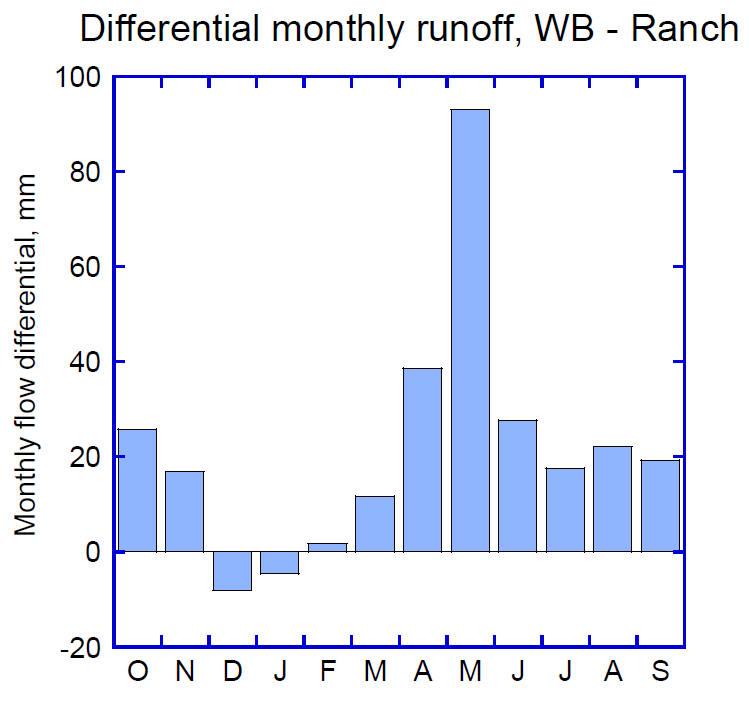 Although annual runoff is consistently greater at West Branch, the relative difference varies greatly from year to year. The runoff differential is highest during the snowmelt period in April and May (Figure 35), partly as a consequence of the enhanced snowpack from machine-made snow, and the prolonged melt of skier- compacted snow. The low to negative differentials in late fall and early winter result from historic water extraction from West Branch for snowmaking. As yet, we have not been able to make a definitive assessment of the ski resort build-out on runoff. The assessment has been confounded by the construction of a large snowmaking storage pond, increased snowmaking, irrigation of the new golf course, and a new stormwater drainage system for the development.

Mountain regions throughout the world face intense development pressures associated with recreational and tourism uses. Additionally, climate change scenarios have projected trends toward fewer, but more intense precipitation events and a greater proportion of winter precipitation arriving as rain rather than snow in the Northeast. Both of these results will have severe implications for high elevation sites, but diminishing snow amounts in particular will affect how commercial ski areas operate. Alpine ski resorts like Stowe Mountain Resort will need to rely more on snowmaking to keep trails covered and groomed, and are expanding and moving toward becoming four-season destination resorts through development of such things as golf courses, water parks, bicycle trails and other non-winter sporting activities. The result will be greater human presence, usage and impacts throughout the entire year which will place additional pressures on the landscape, many of which have not been experienced in the past. With this new development comes a greater percentage of the landscape covered by impervious surfaces; buildings, parking lots, tennis courts, walkways and other outdoor recreation facilities altering patterns, volume, velocity and chemical make-up of runoff.

To our knowledge, this is still the only study of its kind, east of the Rocky Mountains, quantifying differences in overall streamflow volumes, peak flows, minimum flows, and timing and duration of each in both an undeveloped and a developed watershed at high elevation. This project has, and will continue, to produce real-world data needed by State regulatory agencies to make data-driven, environmentally sound decisions about development at Vermont's high elevation sites. Without proper regulatory oversight, safeguards and controls, alterations in streamflow (quantity, velocities, timing, and water quality) can potentially have devastating impacts on aquatic and riparian communities down-stream of highly developed sites. 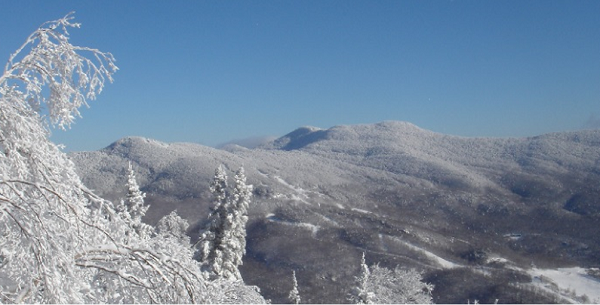 Vermont's high elevation areas have the potential to be heavily impacted as the result of increased annual use and changing climatic conditions.