Look Out for Lymantria dispar dispar, coming to a Tree Near YOU!

Lymantria dispar dispar (commonly called spongy moth, formerly gypsy moth) is an exotic pest accidentally introduced into the US over 150 years ago. It used to cause major defoliation in Vermont’s forest, rural and urban settings every 8-10 years. Until 2021, we hadn’t seen an outbreak since the early 1990s thanks in large part to an insect-killing fungus called Entomophaga maimaiga that infects the larvae. In 2020, a few reports of an abundance of spongy moth caterpillars were received, and in 2021, people all around Vermont reported large numbers of an unfamiliar caterpillar, which were in fact spongy moth. It had been so long since we had an outbreak, many people didn’t recognize them anymore, but they do now, and they are not happy to see them return. Spongy moth has a wide host range (over 300 identified species), feeding mostly on deciduous hardwoods, and particularly favors oak, maple, birch and apple trees. However, when food is scarce, they even feed on pine needles. 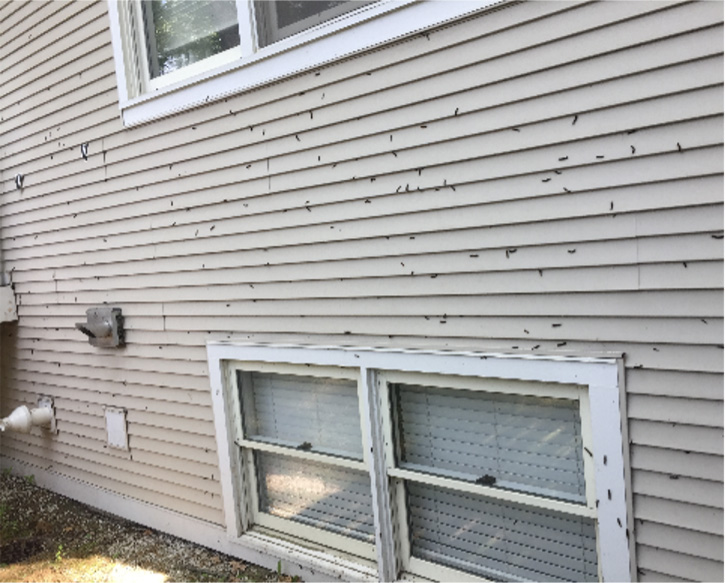 The caterpillars are greyish with six pairs of raised red spots and four pairs of raised blue ones and tufts of yellowish hairs. They start out tiny when they hatch from the egg in early spring, and spin down the tree on thin silken threads, landing in your hair or plants below. They shed their skin 5-6 times over their life, each time getting larger. After the last molt they can reach 3 inches long! By the time they get that big, they are voracious feeders and can devour all the leaves on young trees and shrubs. Larvae have an interesting feeding behavior to escape predators, such as birds and small mammals. They climb into the canopy of host trees at night to feed, and climb back down in the early morning to hide in the leaf litter or in bark crevices on the trunk. This behavior is a handy way for homeowners to manage them too. A band of burlap or soft weed cloth can be wrapped around host trees, held in place with twine and folded over itself (don’t staple or nail it in place!). Caterpillars hide under the burlap, and can be removed in the morning and disposed of in the trash in a closed bag or in a can of soapy water with a bit of rubbing alcohol. When populations are high, caterpillars can be seen crawling on the sides of homes and barns during the day. They are not trying to get in the house, but are seeking a hiding place like they do in the bark crevices on tree trunks. They can be removed daily with a shop vac containing a small amount of soapy water, but make sure you empty the canister afterwards. The key to success with these manual methods is to be diligent. You must remove the caterpillars every morning. Keep in mind that every egg mass can have 50 to 1,500 eggs so there may be a lot of caterpillars crawling around. The hairs of spongy moth can cause skin irritation for some people. Therefore, if you are prone to allergies, it is advised that you wear a long-sleeved shirt, long pants and gloves to avoid touching them.

The state decided not to conduct an aerial spray program this year. However, there are several insecticides registered for use by homeowners against spongy moth caterpillars. Contact insecticides kill when they are sprayed on the caterpillar. There are also several biological control products that contain a bacterium called Bacillus thuringiensis kurstaki (Btk). This is a stomach poison that kills the caterpillar after it feeds on leaves sprayed with the insecticide. This is a more environmentally friendly option because it is toxic to a limited number of caterpillars and doesn’t harm many other non-target organisms. It works best when caterpillars are still small. Before using any insecticide, READ THE LABEL, and follow the instructions to protect yourself. Make sure you only use products registered for spongy moth. Because they feed high up in the tree, it may be necessary to seek the assistance of a tree service if you want to obtain full spray coverage of the tree canopy. If you are considering spraying an insecticide to target caterpillars crawling on your house, do a test spray on a small area to make sure it doesn’t harm the siding.

If you have small trees that are getting defoliated by spongy moth, make sure to water them regularly to eliminate drought stress. It is best to do one deep watering per week with 20 gallons to make sure the water gets to the roots. Watering daily with few gallons is not effective. If possible, young trees should be protected from caterpillars with bands around the trunk. If concerned about drought stress on larger trees, water them deeply at the drip line of the canopy, not close to the base of the trunk.

When the caterpillars reach their last molt, they find a secluded place in which to pupate. The pupa is brownish and can be found in bark crevices even under burlap bands. These also should be removed to reduce the population. Adults emerge from the pupae as either whitish non-flying females or brownish males that fly. The females lay their eggs in clusters on the bark, and shed camel-colored hairs to cover the eggs. These egg masses can be scraped off with a knife or fingernail and collected in a container of soapy water and vegetable oil to further reduce the population before next spring.

The good news is there’s only one generation per year, so when they pupate later this summer, the defoliation from spongy moth is over. In addition, is an early-season defoliator. Heavily defoliated trees should produce new leaves and if it isn’t too dry over the summer they will recover. Hopefully the population surge we are observing now will be slowed with infection by the fungus, other naturally-occurring parasites and predators, or by the diligence of homeowners to reduce populations on their trees. Time will tell.

Produced with support from UVM College of Agric., VT Extension System and the Crop Protection & Pest Management Prog. (#2017-70006-27143/ 1013802) from USDA NIFA. Opinions, findings, conclusions, or recommendations herein are the author’s and do not necessarily reflect views of USDA or other supporters. Images may be subject to copyright. For educational purposes only, not for reproduction without permission from the author.