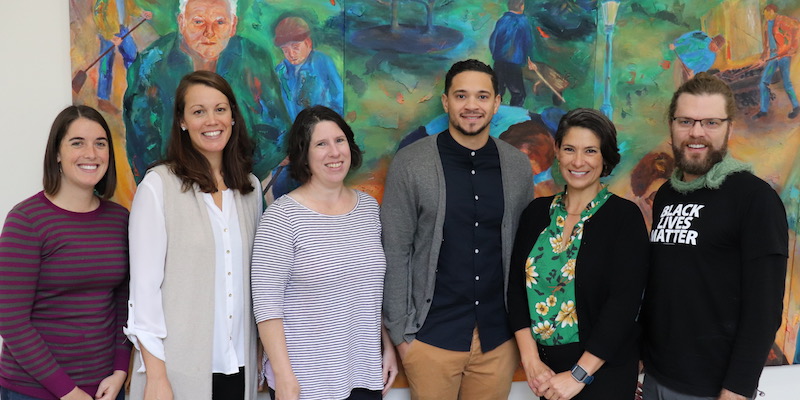 Associate Professor Lance Smith is on a mission to interrupt the school-to-prison pipeline.

The pipeline starts in schools when implicit bias and structural racism are combined with the tradition of punitive discipline. If a student of color or student with behavioral and emotional disabilities acts out, they are more likely to receive an in-school suspension or be expelled. That increases the likelihood for the student to repeat a grade, Smith explains, which is the strongest predictor of dropping out of school and ending up in the juvenile justice system.

Nationally, black and brown children, who represent 17.1 percent of all public school students, account of 37.4 percent of total suspensions, and are 55 percent more likely to receive a discipline referral than white males.

“There’s this powerful false binary that you’re either racist or a good person. And, of course, most counselors know that they are good, moral, kind, beneficent people, so it follows that, by definition, they cannot be racist,” says Smith, Ph.D., who is the coordinator of Counseling graduate program at the College of Education and Social Services. “But in fact, we’re both. Myself included.”

Restorative practices in schools are a way to reverse that trend. Stemming from Indigenous practices that are thousands of years old, restorative schools aim to create a culture of care, establishing positive relationships, promoting accountability and repairing relations that may have been damaged by conflict and harm, Smith says.

A significant part of their research is working with the Burlington School District to evaluate the implementation and efficacy of restorative practices throughout the district. The goal, as outlined in a five-year MOU with the Burlington School District, is to achieve goals of reducing suspension rates across the board—including inequitable suspension rates across racial, socio-economic and ability-status lines—and reducing achievement gaps among traditionally marginalized groups of students and improving school climate for all.

The restorative practices team’s research has been funded with multiple grants from the CESS Strategic Innovation Grant program, a Jean Garvin Research Fellowship grant, and a REACH Grant from the UVM Office of the Vice President for Research, totaling nearly $80,000 over two years.

The paradigm of restorative practices is that when harm occurs, the harmer is not excluded, but instead invited closer into the community to make amends.

“I think one of the misunderstandings about restorative practices is that it’s too soft, and kids are getting away with anything,” says Smith. “It’s just the opposite. Kids are held accountable, and they’re invited to share what’s going on in their lives, which may be informing their behavior. They’re then invited to make restitution and amends.”

More thoroughly integrating the concept of critical consciousness to restorative practices is an important next step for schools to be successful in reducing inequity, Smith says.

Critical consciousness—first coined by Brazilian educator and scholar Paulo Freire— means someone has the ability to recognize inequity and work toward making a change.

That inequity may be recognizing that kids in poverty are marginalized by something as common as a book fair. Or it’s knowing that teens of color are more likely to be stopped by police walking home from school. Or, in Vermont, it's understanding that a person of color is three times more likely to be in prison than a white person.

If school counselors have critical consciousness, Smith says they will be able to recognize class inequity, gender inequity, racial inequity—and take a stand.

In 2018, Smith was lead author on the first paper to introduce the concept of restorative practices in the prestigious Professional School Counseling Journal. Smith and his team are currently writing up a research study that found that restorative practices are intuitive for school counselors because of the emphasis on building relationships, empathy, and listening.

Smith, who began teaching at UVM in 2008, previously worked as a school counselor and taught sixth grade. At UVM, he teaches five graduate courses per year, including Diversity and Intersectional Equity Issues in Counseling.

“What I love about teaching at UVM is that our students are hungry to develop greater critical consciousness,” he says. “I share with them, as a white person, with white kids who are unfairly advantaged in schools and in our justice system, that if I don’t do something to interrupt the school-to-prison pipeline, then I’m complicit in maintaining it.”