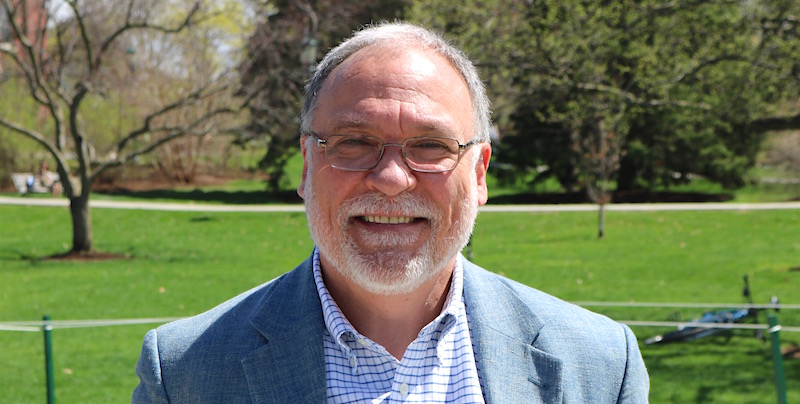 Professor Michael Giangreco believes in the potential of every student.

Giangreco, who joined the UVM faculty in 1988, says his roles in public education – as a special education teacher, school administrator, and university professor – led him to be an unapologetic advocate for extending inclusive educational opportunities for students with the full range of disabilities.

“My work focus is on inclusion, especially for kids who historically have had less access,” he says. “It’s better in Vermont than a lot of other places. But we still have work to do.”

For example, Giangreco explains that skilled special educators cannot produce quality inclusive opportunities on their own. Instead, collaborative teamwork among educators, families, and other service providers is a critical element of inclusive schooling. One of the most essential pieces of this teamwork is teacher engagement, reflected in the level, type, and quality of interactions classroom teachers have with their students who have developmental disabilities, he says.

Every positive, promising or emerging example of inclusive education Giangreco has encountered has included a classroom teacher who thought of their student with developmental disabilities as one of their own. This sense of ownership is manifested in the teacher being knowledgeable about the student’s educational goals, ensuring access and participation to the full range of class experiences, being engaged as a co-leader in curricular and instructional planning, and spending time teaching the student, he says.

Giangreco’s approach has resonated with his UVM students, including Petra Rinelli, a special educator at Hunt Middle School in Burlington. She completed two graduate courses with Giangreco, Behavior Analysis in Special Education and Students with Severe and Multiple Disabilities: Characteristics and Interventions, before graduating with a master’s degree from UVM in 2017.

“Many of the values Professor Giangreco has been promoting are reflected in my daily work now, not just the belief in every student’s potential but also the belief in the adults and paraeducators I work with,” Rinelli says. “He also helped shape my strong belief that every student, no matter the challenges he or she faces, has an innate ability to learn and progress.”

Giangreco, who describes himself as an inadvertent scholar, is known on the national stage for his research presentations. In the 1990s, he began searching for different ways to connect with his audience by using visuals, stories, and humor.

A fan of Gary Larson’s Far Side cartoons, Giangreco constantly searched his books and calendars for cartoon images that would help make his points. He found that Larson’s cartoons were effective presentation tools as people laughed and remained engaged long enough to consider the content of the research. Still, he says, those Larson cartoons couldn't offer the specific content he sought to share.

“The Larson cartoons were funny but they weren’t on target,” he says. “So, even though I knew I couldn’t draw, I decided to just start creating cartoons on my own that matched the points I wanted to make. Once I had 30 or 40 cartoons, I thought I had something, and I knew I had more in me. “

That’s when he started working with his friend, artist and illustrator Kevin Ruelle, who would redraw Giangreco’s original sketches until they matched the images he had envisioned in his mind's eye. When he and Ruelle produced enough cartoons to publish a book, they landed a deal with a small Minnesota-based publisher, Peytral Publications. “Ants in His Pants: Absurdities and Realities of Special Education” (1998), launched a series of four cartoon books, and then a searchable CD, published between 1998 and 2007, that included well over 300 cartoons depicting special education research and issues. Since late 2007, the series has been distributed by Corwin Press/Sage. 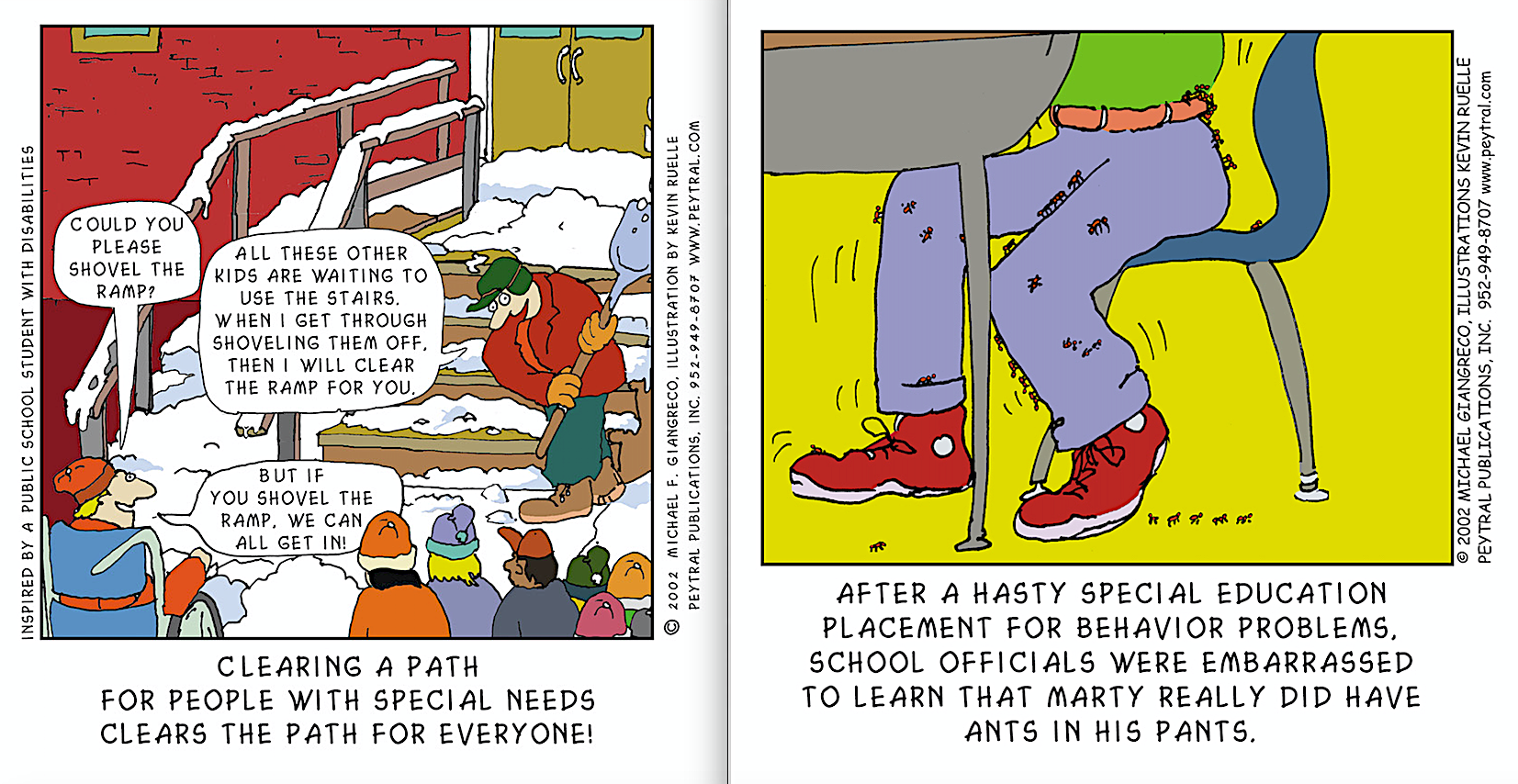 The cartoons became a hit, and have found their way into innumerable conference presentations and been reprinted in dozens of books, journals, magazines, newsletters and continue to make the rounds on social media. The cartoons have been displayed in the Vermont Statehouse on a number of occasions, such as Disability Awareness Day, events highlighting supported employment for individuals with disabilities, and during testimony to legislators on special education issues.

“People remember those visual images,” he says. “The cartoons represent research findings or significant issues of policy in the field, and they can be effective vehicles to advance a progressive agenda of change.”

UVM alumna Lindsay Sanderson, a special education teacher at Shelburne Community School, has two poster-sized cartoons of Giangreco’s hanging in her office. She took two graduate courses with Giangreco while earning her master’s degree in special education at UVM.

“Professor Giangreco practiced what he preached. His material was scaffolded to engage all types of learners,” Sanderson says. “He insisted that his students carry themselves in a way that was professional, and I was drawn to that. For example, when groups of students turned to one another to engage in discussion, he made sure that we all physically turned our desks around so that we were face to face—a small detail that really goes a long way to ensure engagement, inclusion, and respect.”

An Advocate for Equity and Inclusion

Giangreco is the project director of EVOLVE Plus at the UVM Center on Disability and Community Inclusion (CDCI). The project offers school-based research, training, technical assistance, and collaborative consultation on a fee-for-service basis to schools and organizations in Vermont, several other states, and a few other countries, including Canada, New Zealand, and Australia. EVOLVE Plus offers assistance on a variety of topics including alternatives to overreliance on paraprofessionals, and meaningful inclusion of students with disabilities in general education schools and classrooms.

In recent years, Giangreco provided testimony to the Vermont House and Senate Education committees on inclusion of students with disabilities, alternatives to overreliance on paraprofessionals, and inclusive service delivery models that are being implemented in some Vermont schools. "In part this is about ensuring equitable and supported learning opportunities so that all students with disabilities have the same access to the general education curriculum and highly qualified general education teachers that are available to students without disabilities."

He will continue to focus on the equity challenges and inclusive special education delivery when his time as interim chair of the Department of Education ends this summer.

“A question I like to ask my students and school colleagues in reference to any number of practices being considered for students with disabilities is, ‘Would it be OK if the student did not have a disability?’” He says this simple question can help expose well-intended practices that may actually be disguising hidden inequities. “We need to develop better models of inclusive service delivery and corresponding practices to ensure that all students are supported in pursuing valued life outcomes.”

Erica Houskeeper
"A question I like to ask my students and school colleagues in reference to any number of practices being considered for students with disabilities is, ‘Would it be OK if the student did not have a disability?’”