Say We Won and Get Out: George D. Aiken and the Vietnam War

In this new book, Stephen Terry, a former staffer with Sen. Aiken details Aiken’s life and rise to prominence in the U.S. Senate – examining how his approach to politics stems from his early life as a farmer and horticulturist in Putney, Vermont.

Terry draws from historical records including original recordings of Aiken and then President Lyndon B. Johnson to weave a tale that takes us through Aiken’s early life, his rapid ascendance in Vermont politics, his career as a U.S. Senator and his evolving views of the Vietnam war.

The website tells the story of the book using multi-media content, links to photos and videos and interviews with Senator Aiken.

Aiken is famous for his bi-partisanship – having breakfast every morning with his Democratic counterpart, Senate Majority leader Mike Mansfield. Aiken always had an English muffin with peanut butter plus coffee. Lola was the only other person at the table with them.

Impeachment: It was Aiken, along with key senior Republicans who decided they could no longer support Nixon after the U.S. Supreme Court ordered the release of all Nixon tapes which confirmed Nixon's cover-up crimes. Nixon resigned his office after GOP Senators Barry Goldwater and Hugh Scott told the President, with the backing of Aiken, the Dean of the Senate,  that the Senate would convict Nixon if the full House voted to impeach. That president at that time chose resignation rather than the humiliation of impeachment. 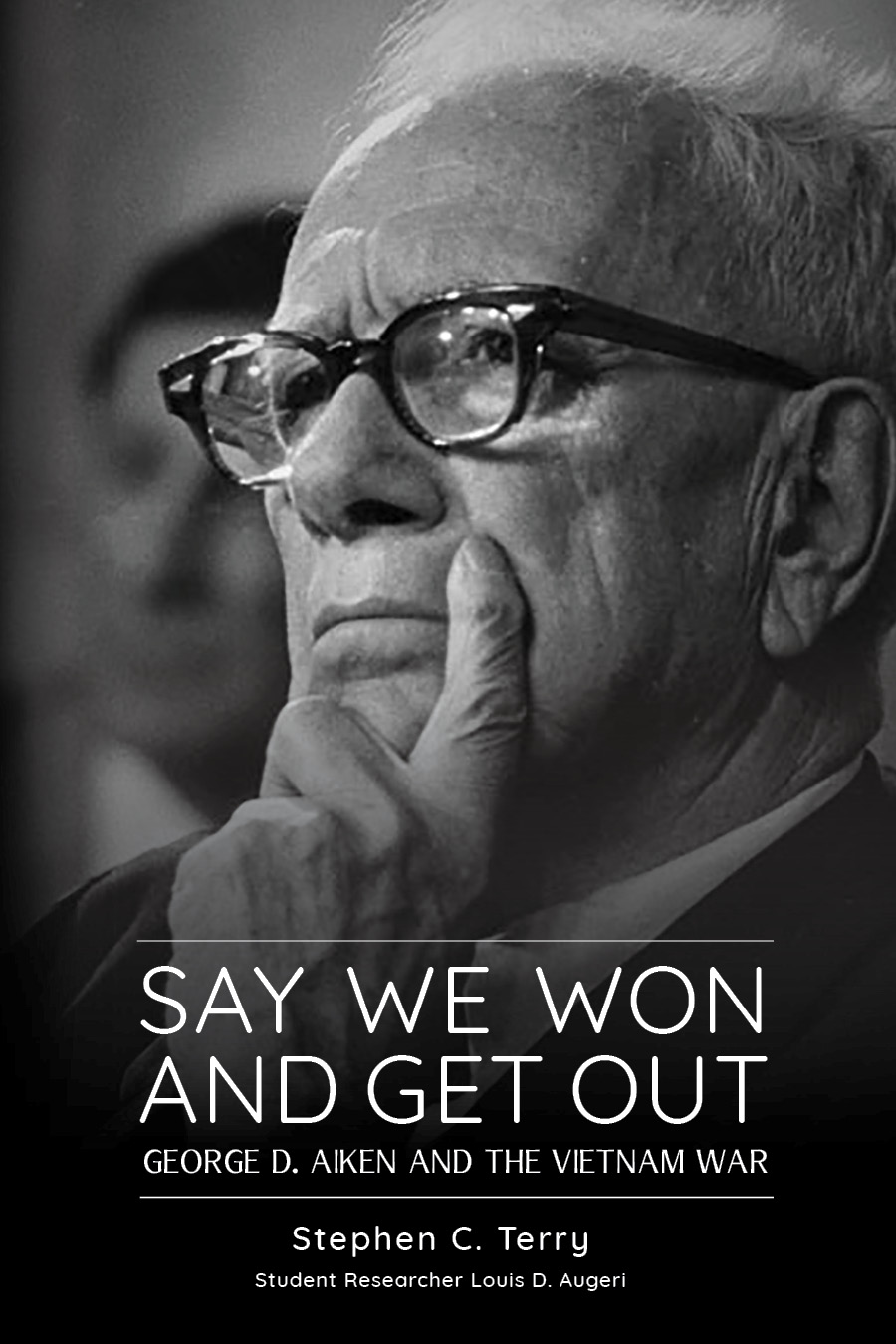 The book contains an interview – conducted by Bernie Sanders – with George Aiken -- published in Vermont Life in 1973. In the interview, Bernie asks Aiken about the changing nature of Vermont, about businessmen running government, about corporations taking over Vermont businesses and about all the presidents that Aiken served with. See SenatorAiken.com.

The book also contains speeches from Aiken, including his “Declare Victory and Go Home” speech and his speech about Nixon’s impeachment process.

Beside Aiken in all those years was his wife Lola Aiken – who grew up the daughter of a Barre Granite worker. Lola was the gate keeper of all things Aiken and Aiken would not have been half the success he was, without Lola by his side. See this interview with Lola’s friend Cynthia Belliveau, on SenatorAiken.com.

Terry is a former Aiken staffer (1969-1975); Reporter and Managing Editor, Rutland Herald; Rutland, (1975-1985) and Senior VP, Green Mountain Power; (1985-2005). He has a degree in philosophy from the University of Vermont. Terry’s previous books include Philip Hoff: How Red Turned Blue in the Green Mountain State (with Tony Marro and Samuel B. Hand) and The Essential Aiken: A Life in Public Service (co-editor: Samuel B. Hand).

Terry’s research assistant on the book is Louis Augeri, a Junior/Senior dual Political Science and History major at UVM. Augeri previously worked closely with Nick Muller as a key member of the research team on Samuel B. Hand: Green Mountain Scholar (Center for Research on Vermont, 2018). Augeri is the winner of the 2018 Green Mountain Scholar Award for outstanding student research.

The companion website was developed by Eliza Giles, the digital director at CRVT. Sophia Trigg, CRVT’s Coordinator, designed the book.

The book is published by the Center for Research on Vermont and White River Press with support from the Silver Special Collections Library and Continuing and Distance Education at the University of Vermont’s George D. Aiken Lecture series.