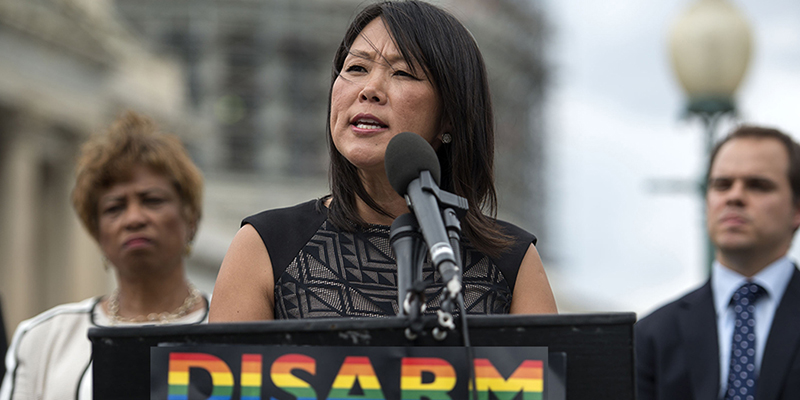 Po Murray ’89, co-founder and chair of Newtown Action Alliance. A fairly typical week for Murray: traveling to D.C. with families affected by gun violence to bring their personal stories to Congress. She finds hope in the “unapologetic voices” of the students of Marjory Stoneman Douglas High School. “As this generation of students becomes voters, there will be a significant change in the future,” Murray says. (Photo: Leigh Vogel/Getty Images for MoveOn.org)

With every mass shooting, gun violence surges into the headlines. And with it come the thoughts and prayers, the calls for gun control legislation, more effective mental health screening, or bolstered school safety. The debate rages, then quiets, until the cycle begins anew with the next instance, tragically, often weeks or mere days away. But for advocates working to effect change, this issue is a constant. Three UVM alumni, all of them motivated by the unthinkable massacre at Sandy Hook Elementary School seven years ago, are among the faithful raising awareness and pressing for progress on this deeply rooted American problem.

On December 14, 2012, Po Murray ’89 believed she was living in one of America’s safest neighborhoods. The illusion would shatter that morning when a 20-year-old neighbor named Adam Lanza murdered his mother in their home then drove to Sandy Hook Elementary armed with an assault rifle, a handgun, and multiple rounds of ammunition.

Murray and her husband, Tom Murray ’89, had lived in Newtown, Connecticut, for thirteen years, and their four children had all attended Sandy Hook Elementary. Their youngest, Tommy, graduated from Sandy Hook the previous spring and was a sixth grader in middle school when the shooting occurred. The Murray family lost beloved teachers they had known for years and children from their neighborhood, as shock and grief rippled through their entire community. Though she considered herself politically aware at the time, Po Murray admits she had no sense of the weakness of gun laws. “At that moment in time we decided we needed to take action to create some cultural and legislative changes to reduce the epidemic of gun violence in our country,” she says.

Last fall, Murray was in the midst of a fairly typical week, which saw her traveling to Washington, D.C., with families affected by gun violence to bring their personal stories to Congress. She was joined by Fred Guttenberg, who lost his 14-year-old daughter, Jaime, in the 2018 Parkland, Florida, school shooting. He and Murray lobbied Congress to take action on Jaime’s Law, requiring background checks on ammunition purchases.

Murray is heartened that H.R. 1296, the Assault Weapons Ban of 2019, introduced by Rhode Island Rep. David Cicilline, has garnered 214 co-sponsors. With just four co-sponsors still needed to push a vote, Murray says, “We’ve moved really close, closer than we’ve ever been.” She adds that banning assault weapons is just one of many laws and other steps necessary to stem the tide of gun violence.

She finds hope in the fact that so many candidates for the Democratic Party’s nomination for president are speaking out on gun control, often adopting the tell-it-like-it-is terminology of Newtown Action Alliance, describing assault rifles as “weapons of war.” She also finds hope in the “unapologetic voices” of the students of Marjory Stoneman Douglas High School as they rose up to demand action. She credits them with helping push red states, and states like Vermont with a deep gun culture, and some Republican lawmakers to shift course in favor of common-sense gun laws. “As this generation of students becomes voters, there will be a significant change in the future,” Murray says.

On December 14, 2012, Mariah McGough ’17 was a high school senior in Brookfield, Connecticut, which borders Newtown. Among the schools where she worked part-time in an after-school program: Sandy Hook Elementary. She knew two of the twenty children killed and continued her job when school resumed after the horrific day. “Needless to say, it was a life-changing experience. The work I do now is very personal, but even more rewarding for that reason,” she says.

McGough is a communications associate with Everytown for Gun Safety, a New York City-based non-profit. She works, in particular, with the organization’s grassroots effort Moms Demand Action. She’s the point person in the northeast region and a number of other states, working with volunteers, mothers and fathers, and families touched by gun violence, helping them share their personal stories with the media. “My job is to elevate their voices and change how we talk about gun violence in America by passing the mic over to them,” she says.

A public communication major at UVM, McGough has found work in line with her education and purpose. She credits Kate Finley Woodruff, faculty member and associate dean of the College of Agriculture and Life Sciences, as a key influence. A class with Woodruff on socially responsible marketing steered McGough toward non-profit work; she later gained experience with an internship in Burlington and began her career at Everytown as an intern. “Without a doubt, I wouldn’t be where I am right now without the way that I was taught about communications at UVM,” she says.

McGough takes exception to the notion that “change never happens” when it comes to addressing gun violence. Citing the issue of daily individual shootings in American cities, as opposed to mass shootings, she highlights the number of community-based initiatives that are making a difference. She notes the state-level institution of common-sense measures, such as red flag laws, allowing law enforcement to temporarily remove firearms from an individual who might harm themselves or others. “Action in congress is long overdue,” McGough says. “But the fact is, it is happening in incremental steps—at the local level, at the state level. Groups like ours are gaining more momentum than ever before.” 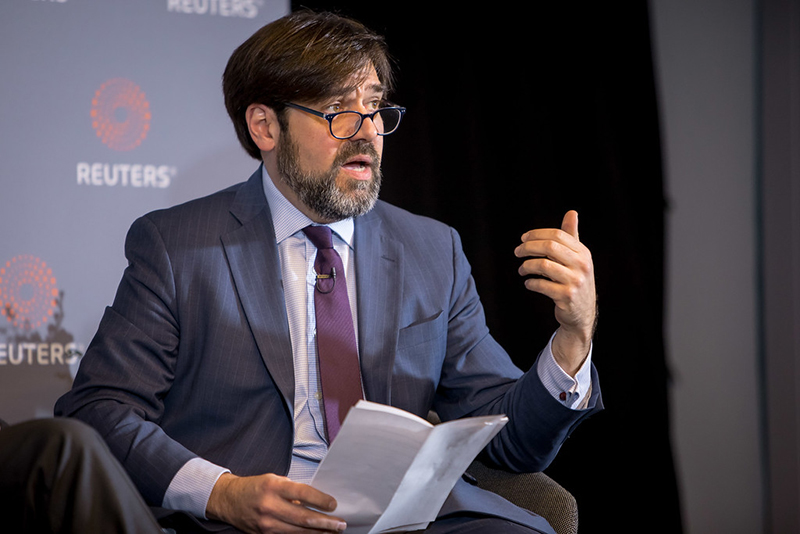 On December 14, 2012, Rob Cox ’89 was on a transatlantic flight from London to New York. The longtime Reuters journalist was returning from a business trip, looking forward to being back home with his wife, Hannah, and their two sons in Newtown, Connecticut. As his plane landed at JFK in the early afternoon, Cox’s phone lit up with texts, voicemail alerts, and 200-some new emails. The first text he read was from a Danish friend: “Please tell me your son wasn't at that school.”

Fortunately, neither of his sons was at that school. Older son, Sam, was at his first semester of boarding school; younger son, Ethan, was at Newtown’s middle school, on lock down. “When I got home, I hugged my children so tightly I am surprised to this day that I did not break their ribs. I was so thankful that my boys were safe,” Cox says. “But, by then, I knew there were 26 families in my town who were not so fortunate.”

As their emotions processed through empathy, compassion, anger, Cox and his neighbors also felt an immediate call to action. Within 24 hours of the massacre, Cox and a circle of friends were working to develop what would become Sandy Hook Promise, an organization dedicated to healing their own community and helping others avoid the same fate.

Cox left the Sandy Hook Promise Board in 2015, but continued to focus on links between finance and the gun industry in his Reuters columns. That work took on a renewed emphasis with the 2018 killings at Stoneman Douglas High School in Parkland, Florida. A day after that shooting, Cox took the lead among national media in highlighting Wall Street’s ties to the gun complex. Subsequent pieces covered consumer protests which helped motivate corporate action, such as Walmart’s ceasing sales of AR-15 ammunition and advocating for universal background check laws.

Though Cox now lives in Paris, focused on his work as global editor for Reuters, colleagues with the news organization in the United States carry forward his work examining connections between finance and the gun violence epidemic.

Read a 2014 interview with Rob Cox, recounting the first years of Sandy Hook Promise and reflecting on UVM’s influence upon him.