With an impending election and new extension delaying the UK’s long-awaited departure from the EU, UVM experts paint the big picture of Brexit 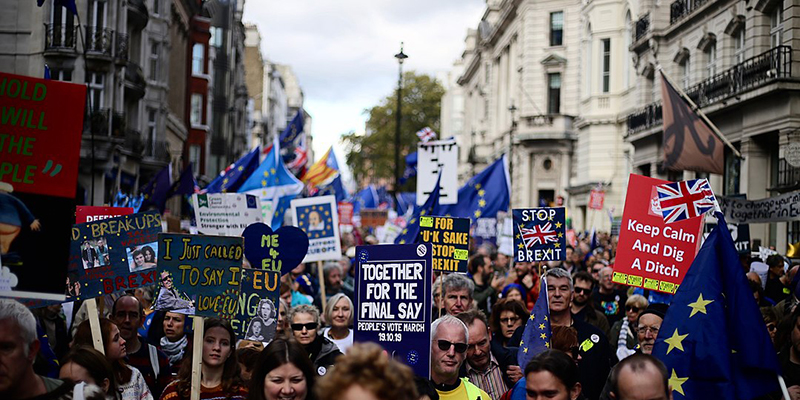 The results of the EU referendum stunned Brits and beyond on June 23, 2016, and has been a topic of frenzy ever since. On October 19, 2019, hundreds of thousands of protestors took to London’s streets for the People’s Vote march to voice their discontentment with Brexit while Members of Parliament in the House of Commons debated and voted on the issue further. (Photo: Ilovetheeu via Creative Commons)

October 31 marks the day lawmakers in the United Kingdom (UK) were supposed to have wrapped up Brexit negotiations and formally exited the European Union (EU) once and for all. But after two missed deadlines, two resigned prime ministers and more than three years of whirlwind vagaries, no such deal has been made. In fact, Brexit’s new deadline is January 31, 2020, and the UK is currently gearing up for a December 12 snap general election. Amid the flurry of daily and even hourly updates from Parliament, it’s easy to lose sight of the original impetus of Brexit. To better understand this complicated issue and its implications, we checked in with UVM experts and faculty teaching a range of courses, from international relations and political science to business, in which Brexit’s unpredictable developments regularly make their way into class discussions. Here are their takes on Brexit—and a glimpse at what it’s like teaching global events in real-time.

Richard Sicotte, professor of economics: “The European Union is a trade agreement that allows free trade, free movement of labor and free movement of financial capital between all the members. Most economists will say, generally, that these types of agreements are beneficial, but they are not going to benefit everyone. They never will.”

Bradley Bauerly, lecturer of political science: “The initial idea of the European Union emerged with an idea of liberal peace theory, in which countries that trade with each other are less likely to go to war. They wanted to set up this whole economic trade bloc that would help reduce tensions. The EU was supposed to guard against war internally; it was also supposed to bring countries together in this cosmopolitan utopian idea. So that's what drove people to support the EU.”

Bauerly: “A lot of what we hear in the media is that those that voted to leave the European Union are mostly nationalist, anti-immigrant and/or racist factions. Data is there and shows that was part of what motivated people, but there's also data to show that the areas that experienced trade shocks, or loss of jobs due to increased trade, were places where people were more likely to vote for Brexit.”

Richard Vanden Bergh, professor of strategy: “There's a general concern among some British that the EU has control over a lot of important regulations, and that the EU isn’t directly accountable to the British in terms of the effects of those regulations. From an economic perspective, I think one tension is that smaller entrepreneurial firms have their hands tied by the EU regulations, and that entrepreneurial activity may increase under Brexit. However, a big-picture benefit to the British is that they have a very open trading bloc that allows those small entrepreneurial firms to have relatively frictionless trade. If they Brexit, they may lose the benefit of frictionless trade, but they may gain the benefit of increasedentrepreneurial activity.”

Paul Deslandes, professor and chair, history department: “I think people who voted in favor of Brexit thought they were regaining autonomy for Britain. They were upset with the regulations, but also with what was perceived as an imposition of European laws that were hindering the expression of Britishness or the economic development of Britain.”

Bauerly: “It's all happened before, not in the exact same way, but yes. I think this authoritarian, nationalist rise is something that's occurring around the world. I would make the case that it's linked to increased global trade and the way that global economy, particularly financial flows, discipline states and limit their ability to respond to domestic populations. People start to see the political system as broken because what they want isn't what the system is doing; what it’s actually doing is what the global economy needs and not necessarily what the people need. They feel left behind by their politicians for that.”

Susanna Schrafstetter, professor of history: “The EU achieved what it set out to do originally. We haven’t had a war in Europe for a long period of time and, in European history, that’s not something to be taken for granted. It has taken aside the Balkan Wars and the recent wars in Ukraine and Russia, and prevented Yugoslavia from falling apart. But while the Union achieved a lot, you can say it’s kind of stalled in the last decade or so. The key question is whether the project will move forward with all its members, evolve into a federal state—it would have the true powers of a major player on the world stage—or will we see it crumble further?”

Bauerly: “Deteriorating international cooperation between big powers generally means that there's going to be less structure in place that everybody benefits from. When there's a big power in place, they get to set the rules for everybody to fall in line. But when that empire or that hegemon is declining and states are competing with different sets of rules, that creates chaos. States tend to then become more inwardly focused on what they can get against other states rather than how they're going to support an international community. I think you see that within Europe. Individual states increasingly view other European states as their competitors instead of working together.”

Deslandes: “It was always intended to take some time. I think the biggest issue has been around Northern Ireland’s open border with Ireland, established by the Good Friday Agreement. In order to keep a free and open border between Northern Ireland and Ireland, they will need to retain elements of EU law and EU customs, and pro-Brexit people see that as a tether on the UK to the EU.”

Sicotte: “The current proposal is to erect a customs check at the Northern Irish ports, but no checks at the border between Northern Ireland and the Republic of Ireland. This was an innovative solution. It will be odd, though, to have goods be checked before they cross the border between two different parts of the UK—England and Northern Ireland. This would be the equivalent of having a customs check on the New Hampshire-Vermont border and having no customs check at the Vermont-Quebec border. Very odd. If this plan becomes law, and is carried out, the future tariff rates between the UK and the EU are still up in the air, but are likely to be pretty close to free trade. Some recent estimates I saw put the damage to the UK economy at around 5 percent of GDP, but this might not happen right away.”

Deslandes: “No, it's not entirely normal. The British parliamentary system requires that an election be held every five years, but there is no fixed term duration. In the event, right now, of Boris Johnson wanting to call an election, his hope is that he will get a more solid majority of conservative, pro-Brexit Members of Parliament, thereby making it easier for him to actually get the deal that’s been approved by the EU through Parliament.”

Deslandes: “In large part, people are reluctant to it and I think it's a perception issue. It's very difficult to do that because they don't want to go back on a promise, essentially, to hold a referendum and adhere to the decisions of that referendum. People worry about what the political costs might be. But, there are more and more people coming around to the idea of a second referendum, the argument being we have more information now and understand better the economic, bureaucratic and structural implications. I think referenda are not the best way to make decisions about the future of government. I tend to be of the opinion that the way democracy works is not through these direct populist referenda approaches, but actually through elected officials who are paid and who have the time to explore the intricacies of issues and not make decisions for the country based on emotion, gut responses, or that are ill-informed.”

Bauerly: “There may not be a need for a second referendum because potentially they could do a Brexit without actually changing very much, and that's the ‘soft Brexit’ approach. They could negotiate a lot of the same things that they have now—they're going to lose some things, but it could be similar.”

Vanden Bergh: “This will be difficult. Britain must minimize the downside loss of open trade with the EU by negotiating good trade agreements. People point to Norway or Switzerland and the trade terms those countries have with the EU. If Britain can replicate those agreements, there's no reason to think the UK economy will not be fine. Switzerland is one of the most vibrant economies in the world and it’s not formally part of the EU.Switzerland's experience suggests that a country in Europe does not have to be a formal member state of the EU to have a vibrant economy.”

Bauerly: “That’s a tough one. The best possible thing that Brexit does is show the complications in the European Union and perhaps pushes that in some way, either to go back on that project or rework the structures to be more responsive to different democracies.”

Sicotte: “This is complicated. A lot of people view the UK’s relationship with the United States as unique. President Trump and others say they want to negotiate a free trade agreement, but I don't think anybody in their right mind would expect that to be resolved even within a year. I think that’s wildly optimistic. There's going to be a lot of issues—Europeans, for example, have rules against U.S. beef with regard to genetically modified organisms, which we consume constantly in the United States, but abroad they don't. I don't think the UK is all of the sudden going to change that. They’re still going to have their own rules that our negotiators are going to be upset about, and our negotiations are likely to have a number of their own. They won’t be able to just pop out a free trade agreement between two very large economies. It's very hard—it’s possible, but it takes time.”

Sicotte: “My class is about migration, trade and finance, so we discuss Brexit as an example in all regards. Migration was one of the motivations of Brexit; it’s all about trade; and London, for a very long time—hundreds of years—has been a global financial center. Brexit touches all three of those areas. In practice, though, the making of economic policy is not some benevolent actor trying to make everybody happy. It's a really messy political process with a lot of biases. I think that anyone who fears the influence of economists and economic policy can see now that the influence is not that great. We're so far from the technocracy, otherwise, Brexit would never have happened.”

Faculty responses have been edited for length and clarity.