Shaking Up the State House

Friends and alumnae Kesha Ram and Taylor Small make history as they take their seats in Vermont’s state house together. 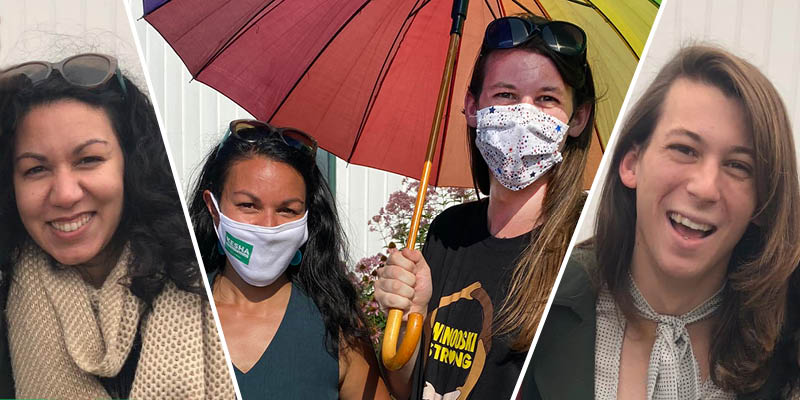 November 3, 2020, is a day that will undoubtedly make the history books. In Vermont this election day marks — aside from the obvious — a step toward a truer democracy that hears all voices. For the first time ever, Vermonters elected a woman of color to the Senate, Kesha Ram ’08, and an openly transgender woman to the House of Representatives, Taylor Small ’16. On January 6, the alumnae and close friends will be sworn in to Vermont’s General Assembly together.

“We've just had this long, beautiful friendship and I think there is something special about this year. People that I know, that I run in circles with and that feel so underrepresented in politics, we're all going to the state house together,” says Ram, who’s of Jewish and Indian heritage.

Having served eight years as a representative for Burlington’s University District and the Hill Section — beginning at age 22 — Ram is no stranger to game in Montpelier. She even introduced the first environmental justice bill to the House before graduating from UVM, where she earned BAs in natural resource planning and political science. Soon she will be installed as a Chittenden County Senator.

In the other chamber, Small — Winooski’s newest representative and a graduate of UVM’s human development and family studies program — has been a known force in her community and an active grassroots organizer for some time. This will be the first time she takes the oath of office and a seat in the General Assembly.

Ram kicked her campaign off in January, unaware at the time that a pandemic was coming just around the corner. Though the campaign plan was disrupted, Ram and her team — including UVM’s Skyler Nash ’21 as campaign manager and Haley Sommer ’21 as communications director — continued pushing forward and connecting remotely with community members.

Alternatively, Small had no intention of tossing her hat into the ring, until a retiring Winooski representative called during the summer to see if she’d be willing to campaign and replace her. For a town like Winooski that celebrates all its residents — New American and refugee families, queer and trans residents, elderly residents and young families looking to grow — twenty-six-year-old Small was the right person for the job.

“That was the exact push that I needed to say, ‘I don't have to wait to get into politics. I wouldn’t have to wait my turn to have a seat at the table. I can go for it right now,’” she says.

She immediately turned to Ram for advice and an opinion about entering the race. “I wanted the real truth and that is something I appreciate about Kesha, that she is always going to handle the truth head on and is not looking to mince words about it.” Within 24 hours of being asked, Small had her mind made up to go for it.

Both women underscore the necessity for young people to see themselves in their representatives, to see that every voice — including theirs — matters. A Santa Monica native, Ram recalls seeing herself in Kamala Harris during her campaign speeches and events back home. “She made the unlikely seem so possible and so attainable for people like me,” she says.

Ram and Small are well aware that they have their work cut out for them during their terms. They share an ambitious list of issues they hope to take on, including fighting for Vermont’s BIPOC communities that are being disproportionally affected by the coronavirus; social, racial and economic justice; and environmental justice. From where they sit in Chittenden County, the most densely populated region in Vermont, the work ahead is not only for their constituents, but for every Vermonter.

Through it all, Small and Ram are dedicated to continuing their work with youth – Small as drag queen Nikki Champagne, a volunteer story time reader who facilitates conversations about inclusivity at local libraries; and Ram as a mentor for students and women with an interest in community involvement. “For as long as I have breath in my lungs, I will continue to want young people to find me, to seek out support – seek out a place on my team, you name it,” she says.

That’s exactly what communications director Haley Sommer did after she heard Ram speak in class. What started out as a shared stance on environmental justice turned into an offer to work with Ram. “A lot of my coping with the national situation was really immersing myself in Vermont politics. I felt a lot of gratitude towards Vermont and really wouldn't rather be anywhere else,” Sommer says of her experience.

For now, both Sommer and campaign manager Nash are drying out from their head-first dive into local politics, and hope to continue pushing for issues that matter to them through other avenues. But only time will tell who’s next to take up the torch and join Ram and Small at the state house.

“We are opening the door for future legislators who look like us, who have backgrounds like us, who hold similar identities to us, to also come and serve alongside us,” says Small. “Because if there is something I know about Kesha and I, it’s that once we open the door, we are holding that door open for others.” 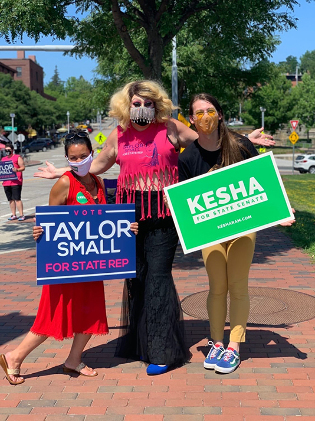 Kesha Ram (left) and Taylor Small (right) swap campaign signs and show their support for each other.