The Pursuit of Knowledge

A Celebration of Student Research 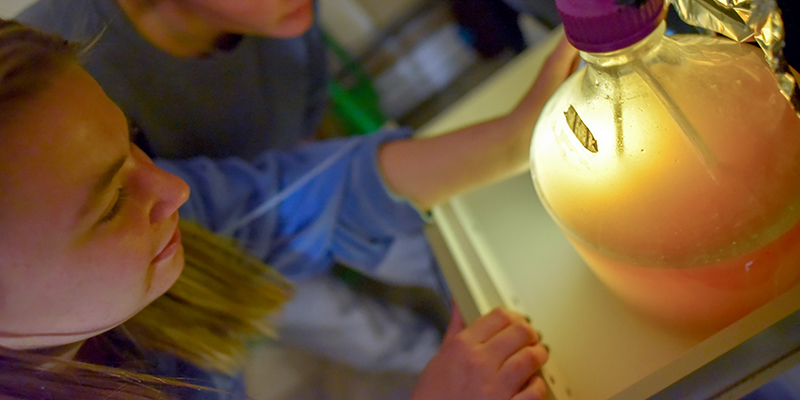 Just after 8:00 p.m., Jamie Burke '20 heads to the lab to feed six artificial cow stomachs she's been sustaining for her protozoa research. As real as artificial rumens can be, Burke's team even named them after characters of the hit sitcom "Friends": Joey, Rachel, Chandler, Monica, Ross and Phoebe. (Photo: Josh Brown)

For students at the University of Vermont, knowledge knows no bounds. Near or far from campus, they study everything from the most complex micro-ecosystems on the planet to the biggest threats to democracy today; they're engaged year-round, day and night, all in pursuit of knowledge. As this academic year enters its final stretch, we take a look at some of the most exciting research projects UVM students have worked on this year.

According to animal science student Jamie Burke ’20, pictured above, the inside of a cow’s stomach contains “one of the most complex micro-ecosystems in the world.” She would know, as she’s helped create and sustain six artificial cow rumens in Professor Sabrina Greenwood’s lab in the College of Agriculture and Life Sciences.

To better understand how introducing amino acid supplements into a cow’s diet might ultimately improve health and nutrition properties in dairy products, Burke—with guidance from professor Jana Kraft—fed and maintained fermenters that mimicked the activity that takes place inside a cow's stomach. She and the research team in Kraft’s lab specifically analyzed the branched-chain fatty acids (BCFA) in protozoal cell membranes in the artificial rumen ferment.

But they had one hiccup: in a real rumen, most protozoa like to attach to the rumen wall; in an artificial rumen, that hospitable surface doesn’t exist. So, Burke 3D printed a filter for the ferment. “This 3D-printed support can serve as a model for all continuous culture fermenter systems to promote protozoa retention, maintain fluid flow, and allow for better comparisons of protozoa numbers in different systems,” she says.

Preparing for a weekend ahead, Danielle Allen makes sure the cells she's growing in the Thali lab for her HIV research will stay "happy and healthy" until Monday when she returns. (Video: Rachel Leslie)

“Viruses are absolutely fascinating,” says molecular genetics senior Danielle Allen, who is conducting research on the spread of HIV at the cellular level in Professor Markus Thali’s lab at the College of Agriculture and Life Sciences. Allen’s research is focused on one of the relevant host proteins, EWI-2, active in cell fusion, which can occur when a viral protein in an HIV-infected cell binds to a surface protein on an uninfected cell. EWI-2 is also an active component in other biological functions, including cancer metastasis, sperm-egg fusion and muscle regeneration. But while it is a known fusion inhibitor, the protein’s mechanism of fusion inhibition is not well understood.

“By understanding these proteins involved in HIV transmission, we might be able to develop better treatments for HIV, which is really important since the current treatments are intense and there isn’t a cure,” says Allen. “I’ve learned a lot of different techniques that I didn’t know before—everything from growing DNA in E. coli to isolating the DNA, transfecting HeLa cells, a lot of stuff with florescence microscopy and staining cells with antibodies—a lot of stuff you just don’t really have time to learn in lectures in undergraduate teaching labs.” 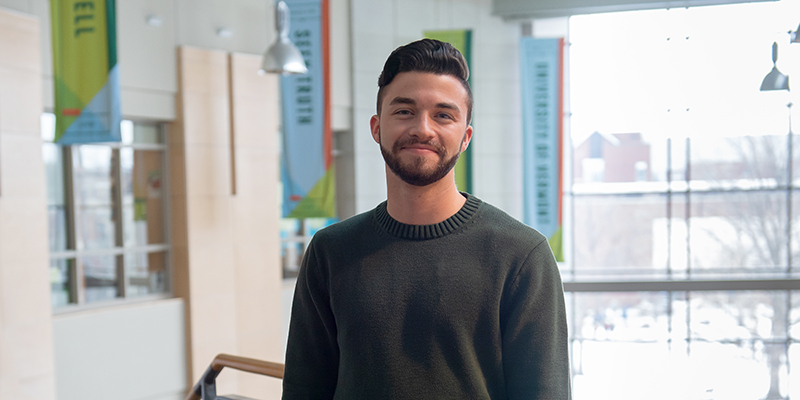 Jason Goldfarb ’20 grew up hearing about the ways social media connected the world, exposing truths in the Arab Spring and elevating causes like the Black Lives Matter movement. But headlines of Russian propagandists and Cambridge Analytica following the 2016 U.S. election prompted Goldfarb to wonder: is social media helping or harming us? In the senior’s thesis project for the College of Arts and Sciences, “Scrolling Alone: The Impact of Social Media on American Democracy,” he outlines a disturbing finding: “Although there is potential for social media to live up to its promise of connecting the world, the present platforms harm civic discourse,” Goldfarb says.

A double major in political science and history, his research considers technology through both lenses, drawing parallels between Facebook and other revolutionary technologies throughout time. “Think of the automobile,” notes Goldfarb. “It democratized transportation, revolutionized warfare, and changed the way in which cities are designed.” Social media, he argues, has similarly transformed much of today’s world, stoking polarization, encouraging distraction, and eroding privacy. The paper was published in the Undergraduate Journal of Politics, Policy and Society in late 2019. “Under the guidance of Dr. Amani Whitfield and Professor Bob Pepperman Taylor, it’s my proudest accomplishment at UVM.” 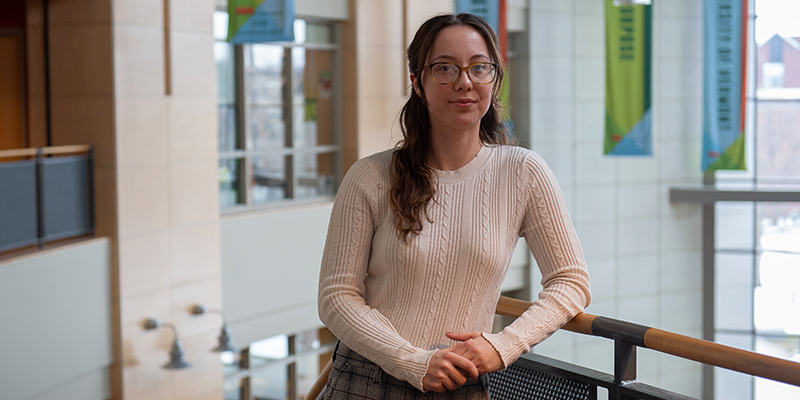 From University Row to upscale private events, it seems like food trucks can be found everywhere these days. Though lauded as an entrepreneurial feat for the past decade, College of Arts and Sciences anthropology student Rose Lillpopp ’20 says that food trucks have historical roots and repercussions in the street food vending industry that run deep. Her research digs into the positive and negative influences food trucks have on our foodways and social relationships, and grapples with topics like immigration, identity, race, class and public policy.

In addition to sampling the menus of dozens of food trucks, Lillpopp developed relationships with vendors and customers she interviewed about how a vendor’s authenticity or legitimacy is earned, how their brands are perceived and what customers convey about themselves when they order in public spaces.

For example, “Customers patronizing a vegan truck versus a wagyu beef truck are claiming different identities that come with various moral or economic prestige,” she explains. “Because food trucks have been under-researched and taken for granted, this conflicted history is erased by the fallacy that the gourmet food truck is unattached to these less privileged forms of vending.” 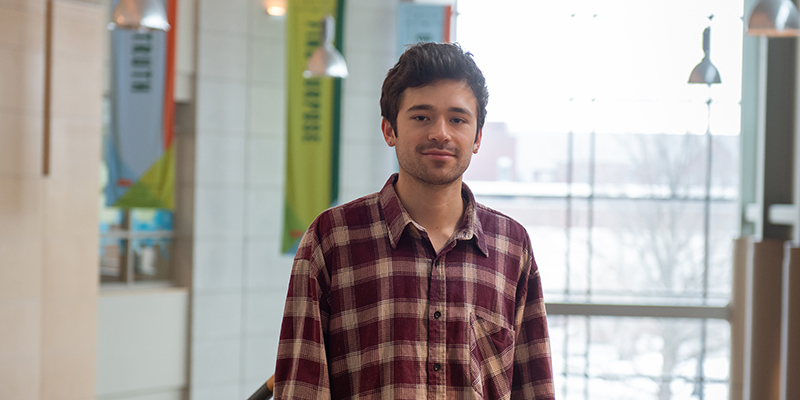 While much about the use and effects of e-cigarettes remain unknown, entrepreneurship and marketing student Mateo Florez ’20 is searching for answers about why these “vaping” products are so popular among college students.

For his Grossman School of Business research, he collected data from 750 undergraduate students about their basic demographics, substance use and preferences to run a statistical analysis technique, called a conjoint analysis. Ultimately, the analysis will provide insight on the relative value each respondent places on certain attributes of vaping—including social context while vaping, substance effect from vaping and health risks—and will be able to establish a possible correlation between demographics and e-cigarette use.

“E-cigarettes have exploded in popularity during the past couple years, and understanding more about the driving forces behind e-cigarette consumption can provide both policymakers and consumers better insight into the root causes of this trend,” he says.

Not all research endeavors result in storybook endings, but for the families that Hannah Sheehy and Provost Patty Prelock collaborated with for a study about Theory of Mind (ToM)—the ability to attribute mental states to oneself and others, one of the primary challenges of autism spectrum disorder (ASD)—it’s been just that.

As a research team coordinator for Prelock’s study, Sheehy, a communication sciences and disorders senior in the College of Nursing and Health Sciences, assisted three families with ASD children throughout a six-week reading intervention program designed to help bolster their students’ ToM. The intervention program incorporated parent-led stories and picture books with ToM elements such as visual perspective-taking and emotion recognition, and included scripts to help parents further facilitate discussion with their child about the stories. Sheehy collected and analyzed the data from the program and found that each child improved not only their ToM score, but their own language complexity and story coherence abilities as well.

“Pointing out a character’s facial expression or asking the child how they think a character is feeling helped the children understand people’s emotions and become stronger storytellers themselves, which is an important social skill,” says Sheehy. “I’ve loved seeing how the study empowers parents to incorporate simple book-reading strategies that scaffold their child’s ToM development into their everyday lives and conversations.” 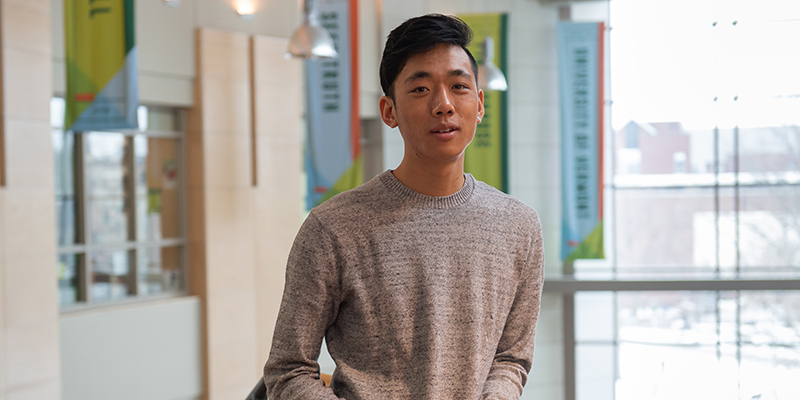 Recognizing the increasing demand for sustainable and socially responsible businesses and products, Michael Chan was curious about how that trend found its way into local communities. A double major in business and environmental sciences, Chan’s research looked to an unexpected source for answers: marginalized small business owners. “Small businesses are key change agents in their community’s transformation toward a more sustainable future,” he says.

Chan conducted personal interviews with local entrepreneurs of varying genders, geographic locations, races, industries and sizes about how they started and grew their businesses. He then analyzed major trends among their experiences by applying constructivist grounded theory to their narratives. What he noticed was that, despite their identity and industry differences, “major themes of family, resilience and care for others emerged, connecting identity groups.”

“Storytelling is a powerful tool in changing the world around us,” Chan says. When it comes to building a more sustainable and socially responsible future, his findings indicate that connecting to the experiences of those deemed “other” in our communities will increase awareness of our individual purchasing power.

How to tell if a malignant tumor will be responsive to treatment? In her time at UVM, senior Sierra Walters has worked to help researchers better answer that question. Specifically, a team working with College of Nursing and Health Sciences professor Paula Deming and Larner College of Medicine professor David Seward is taking a closer look at a protein, STK11, that’s been implicated in certain types of lung cancer and can equate to a poor prognosis. “The big picture to this project is to study how different genetic variations in the STK11 gene alter the protein’s function,” explains Walters, with the hope of someday aiding doctors and labs profiling the tumors of lung cancer patients. “I’m so grateful to have gotten involved in this project so early in my college career,” says Walters, a medical laboratory science major in the College of Nursing and Health Sciences. While the research is on pause during remote instruction, the team still meets weekly. And her time at UVM isn’t done; after graduation, Walters will pursue her masters, and work in the microbiology department at UVM Medical Center. “Having a hands-on job where I’m constantly trying new things and working with other students in the lab helped prepare me for the future.”