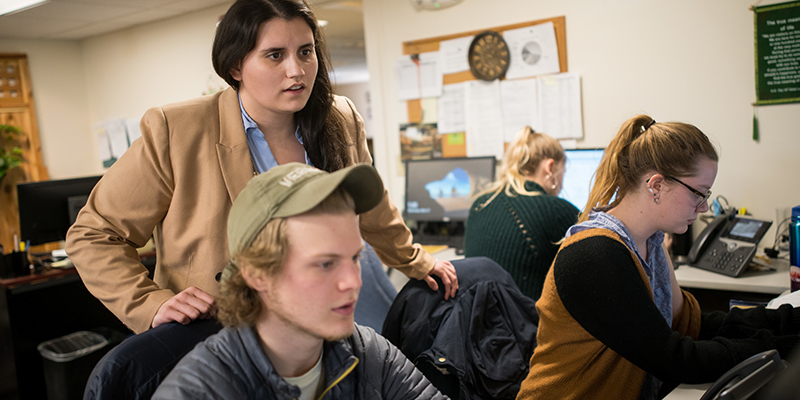 On any given day, students in the Consumer Assistance Program help Vermonters resolve conflicts with businesses, protect themselves from fraud and deal with a host of other issues. Last year, CAP handled more than 12,000 constituent contacts and recovered more than $124,000 for consumers. Kathryn Pfefferle ’18 (standing) supervises students in the practicum. “The power of individuals and the power of voice is something that can never be overlooked,” she says. “People have a lot more power than they think.” (Photos: Andy Duback)

Anyone who has made a trip to Pho Dang Vietnamese Café in Essex Junction might recall the tasty pho noodles, sweet iced coffee or low-key atmosphere. What they likely won’t think about is whether they paid for their meal with cash or a credit card.

That’s because Pho Dang, like many small businesses around Vermont, has moved away from being a “cash only” operation and invested in a credit card processing terminal, sparing many customers a trip to the ATM. To acquire the necessary terminal, owner Dong Dang entered into a lease agreement with a company that leases the equipment in 2017.

Within six weeks of signing the lease, he noticed higher than anticipated charges on his bank statement and placed a call to the Vermont Attorney General’s Consumer Assistance Program, a partnership with UVM. Danielle Shaw, then a graduate student in UVM’s Master of Community Development and Applied Economics program, answered the phone.

“He was going to be paying $6,200 over the course of four years to lease a product he could have bought new for $300-$500 at most,” says Shaw, who served as the Consumer Assistance Program’s graduate assistant.

Housed within the College of Agriculture and Life Sciences at UVM, the Consumer Assistance Program, commonly referred to as CAP, helps Vermont consumers resolve conflicts with businesses, protect themselves from fraud and deal with a host of other consumer protection issues.

Since the early 1980s, CAP has functioned as the primary constituent services arm of the Attorney General’s Office, while also providing a unique learning environment for UVM students. Undergraduate students can earn up to six credits by enrolling in the Consumer Assistance Program practica administered by the Department of Community Development and Applied Economics, where they work as consumer advocates on the frontlines of CAP’s consumer hotline. The course is co-taught with help from Attorney General T.J. Donovan himself.

Kathryn Pfefferle ’18 participated in the CAP program as a public communication major at UVM. After graduating last May, she was hired to stay on as a full-time consumer associate and now supervises students in the practicum.

“The first thing I learned was a lesson in transgenerational communication – how to communicate with Vermonters and communicating what needs to be said in the appropriate way. I had no idea the types of skills that were needed for a phone call,” said Pefferle, adding that CAP receives many calls from elderly and vulnerable populations in the state.

On any given day, students may receive calls from consumers who are cold because they’ve run out of propane, or are afraid because they’ve accidentally given their password to a scammer, or feel they’ve been duped by a company. Last year, CAP handled more than 12,000 constituent contacts and recovered more than $124,000 for Vermont consumers.

Not all the calls CAP receives relate to consumer issues. “We joke that people call us because we answer the phone,” says Charity Clark ‘97, chief of staff to the Vermont Attorney General, who oversees the program. “With those non-consumer calls, the core of what we do is help people navigate government. It’s such an important service.”

CAP volunteers get a crash course in conflict resolution, consumer law and how government functions by assisting consumers in formalizing their complaints or referring them to other agencies of government as appropriate. At the same time, “they’re learning the ethics of public service,” says Sarah Anders, who replaced Shaw as the CAP graduate assistant last year.

Working with Vermonters around the state gives students direct experience in advocacy and policy work and has influenced the career trajectories for several graduates, like Cameron Randlett ’17, who, after finishing the practicum, stayed on to work at CAP part-time while finishing his degree in political science.

“I learned how to read, write and think critically from my political science degree, but really practical things – like how to manage an inbox, how to communicate effectively, how to stay on task when a billion different things are going on – I learned from CAP. All of those skills gave me the ability to be successful in my job,” says Randlett, who now works as a paralegal at a San Francisco-based immigration law firm and has his eyes on law school.

“I still really like consumer protection law. The CAP program was the first time in my life that I connected with the feeling that I did something that mattered, had a purpose. I think I’d like to do that ultimately in the long-term,” he says. 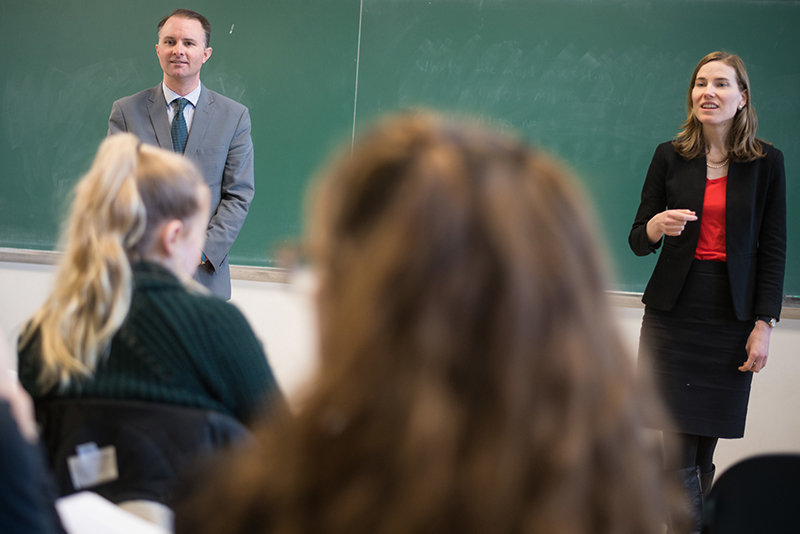 Since the early 1980s, CAP has functioned as the primary constituent services arm of the Attorney General’s Office. Undergrads earn up to six credits through the Consumer Assistance Program practica; the course is co-taught by Attorney General T.J. Donovan (left) and his chief of staff Charity Clark ’97 (right).

A ninth-generation Vermonter and descendent of Thomas Chittenden, Vermont’s first governor, Charity Clark’s Vermont roots are older than the state itself. After graduating from UVM, she went on to Boston College Law School and spent some time in New York before coming back to work in the service of her home state.

Clark, who splits her time between Montpelier and Burlington, was at UVM the day Danielle Shaw received the call from Pho Dang owner Dong Dang. By the time she had been briefed by Shaw, she was fuming. Dang was not the first to call the consumer hotline about the credit card terminal issue. In recent years, students managing the CAP phone lines had already received a number of complaints from other small businesses in the state who had fallen victim to similar predatory lease agreements. After hearing Dang’s case – the most egregious yet – Clark knew something had to be done.

“The leases made me so mad. We decided that a legislative solution would be most effective,” she said. She reached out to legislators and worked with the state legislative council on a bill that would require more disclosures about lease terms and a 45-day right of cancellation for credit card terminal leases.

With a magnifying glass in hand, Clark presented the bill to the Vermont legislature explaining the ways in which the leasing companies were taking advantage of Vermont small business owners, such as including important disclosure language in fine print nearly illegible to the naked eye. Among the bill’s first sponsors was Senator Chris Pearson ’95, who Clark had coincidentally run into in UVM’s Morrill Hall the day she’d learned about Dang’s call. “I was passionately pitching our idea for a bill,” she says.

Clark also compiled a list of consumers who had filed complaints – owners of a yarn shop, car wash, bed and breakfast – all of whom agreed to testify in the House and Senate. “They were so effective,” said Clark. As a result of their testimony, the bill was expanded to address additional issues raised. The bill passed both houses in the Vermont legislature, was signed by the Governor, and Act 4 went into effect July 1, 2018.

For students like Pfefferle, who managed a credit card processing lease complaint from Mountain View Inn – one of the consumers who testified in the case – the experience provided unique exposure to how the legislative process works – a handy lesson for someone aspiring to run for office herself one day.

“The power of individuals and the power of voice is something that can never be overlooked,” she says. “People have a lot more power than they think, especially when it comes to local government. It doesn’t take a superhero.”