The Mental Price of Pain 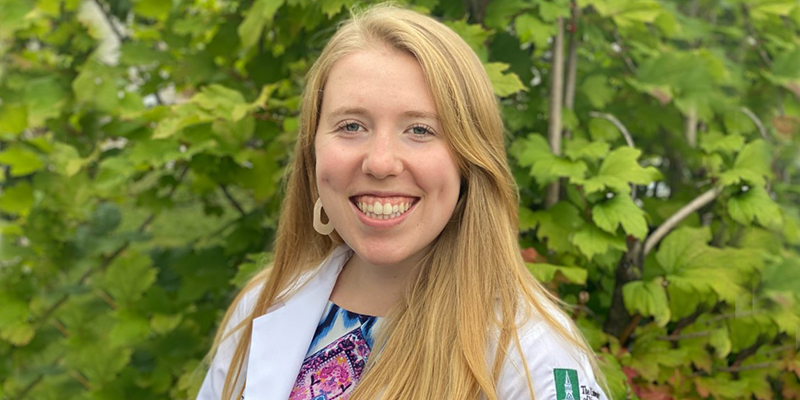 Not too long ago, neuroscience student Julie Connor '18 was wrapping up her Honors College thesis about the relationship between physical pain and mental health, and preparing for whatever was to come after UVM. Little did she know that her thesis writing wouldn’t stop upon graduation; that in fact, it would follow her all the way back to campus. Now a first-year medical student at UVM, Connor’s thesis appears in the November/December issue of the journal “Psychosomatic Medicine.”

“For me, it's really important to address both physical and mental health together, and to try to have a more comprehensive approach to improving people's overall health rather than just looking at medications, but also looking at more psychological approaches,” she says. Having grown up witnessing chronic pain in her family, improving individualized healthcare is at the heart of her work.

The study, “The Association Between Pain Trajectories with PTSD, Depression, and Disability During the Acute Post Trauma Period,” indicates a complicated relationship between sustained elevated pain and symptoms of post-traumatic stress disorder (PTSD). Connor evaluated pain levels of patients recovering from a traumatic injury — say, for example, being in a motor vehicle accident — from the time of the injury to three months after. She found that those who reported persistent elevated pain during that time experienced an increase in PTSD symptoms, increased depression and functional impairment. In contrast, patients who reported steadily decreasing pain levels experienced a reduction in PTSD symptoms, depression and functional impairment.

Connor identified distinct trajectories of pain after a traumatic injury and found that persistent elevated pain is associated with more severe psychopathology immediately following a traumatic injury. That first month after a traumatic injury is critical, she says, because at that point patients can first be diagnosed with PTSD. In professor Matthew Price’s Center for Research on Emotion, Stress and Technology (CREST) — where the study occurred — PTSD is the focal area of interest.

“It was sort of a novel idea that Dr. Price had of tracking daily pain, PTSD and depression symptoms throughout that first month to see if there are any markers of what can lead later to PTSD and other outcomes after a traumatic injury," Connor says.

But what she took away from the study, more than anything, was the need to tailor recovery and care to each individual. “Some people who seemingly had a higher trauma than others, it seemed like they rated themselves as doing a lot better; whereas some other people were doing a lot worse than I thought. It just underscored the importance of individualizing care,” she says, “and using markers like these to try to figure out why there is that difference and why some people do get better and why some other people don't.”

Before her graduation in 2018, Connor and Price discussed publishing the paper, but it wasn’t until they reconnected at a conference post-graduation that the idea resurfaced into action. While working for an integrative medicine clinic in Boston, Connor and Price got back to work, polishing the study and submitting it to journals for publication. At the same time, Connor’s interest in possibly entering the healthcare field began to manifest into reality. She had been accepted to the Larner College of Medicine for the fall 2020 semester.

“Going to med school during COVID and all this is kind of strange, but I would say that it's weirdly less stressful than I would have imagined,” she says. “Now being in med school, I've become more broadly interested in long-term care and prevention, not just pain management. That wasn't always my main interest. Related to this paper, that's what I’ve been thinking about — helping people with lifestyle changes and preventing chronic diseases.”