A Massive Burden of Microplastic 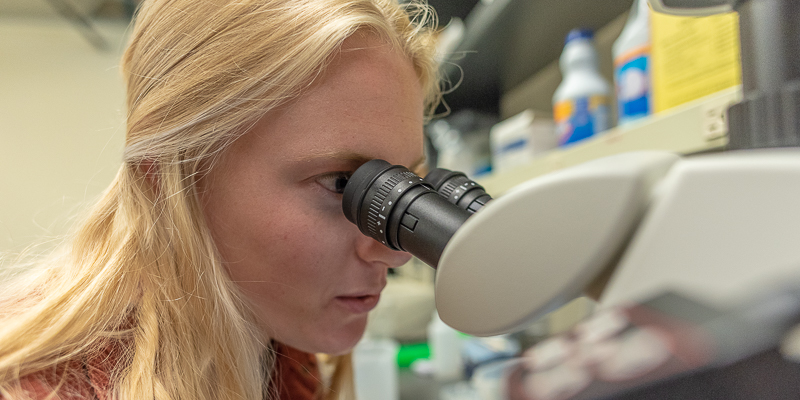 Everything is somebody’s lunch. “Including copepods,” says Emily Shore ’19 G’20. These tiny crustaceans swim about in all of the world’s oceans, chowing down on algae and getting eaten by fish. But now, apparently, copepods are also eating many tiny bits and beads of plastic trash—microplastics—that increasingly show up in ocean ecosystems around the globe.

Shore stares intently through the double lens of a microscope on the third floor of Marsh Life Science. In the bright light, she sees many translucent crustaceans squiggling about. They’re only about a millimeter long, but they look like giant sea monsters. One extra-large critter squirts past. “Oh there’s a krill,” she says. But what she’s hunting for is a particular species of copepod, Acartia tonsa.

What these copepods eat is revealed in what they excrete. “I have some data from a previous experiment where the adults were laying shorter fecal lengths, which showed that they were consuming less algae—and more microplastics,” Shore says. “There was less biomatter to make the fecal lengths longer.” A few minutes later, she sees a copepod going by with a red thread inside—a bit of microplastic, perhaps from clothing.

Acartia tonsa do well in laboratory conditions, which allows Shore and her mentor professor, Melissa Pespeni, to keep reproducing populations alive for many months—so she can explore how all this exotic plastic affects the behavior and fitness of these creatures. And this species of copepod is an important food source for fish in the Atlantic—including many of the commercial species that people eat.

Which makes Emily Shore worried. “What does all this plastic mean for the copepods? And for the fish that eat them? And for people who eat fish?” she wonders. Shorter feces means there was less useable food for the copepod—and previous research shows that some species of copepods with prolonged exposure to polystyrene microplastics have less energy.

Energy is the only life

Emily Shore seems to have plenty of energy. She spent three hours dragging a specialized plankton net behind a motorboat near the shore of Long Island—not far from where she grew up in Manorville, NY—to collect these animals. And now she’ll spend many more hours to find a few dozen she needs for her next experiment. But she’s used to hard work.

It’s one of the reasons she’s pursuing an accelerated master’s degree in biology. She enrolled at UVM as a sophomore, with a heap of AP credits from high school, and was starting to take graduate-level courses in her senior year that counted toward both degrees. “So I graduated in 2019 in three years,” she says, “and I expect to finish the master’s degree in 2020. Four years, two degrees.” This has made the advanced training more affordable—and will let her get to work on the microplastics problem sooner.

With her M.S. in hand this spring, she aims to take a professional internship on the Greek Island of Samos, doing boat tows and collecting water samples, “identifying and categorizing microplastics,” she says. “There's just not enough attention on plastic pollution in the ocean. It’s scary because you can’t see all these critters, except with a microscope,” Emily Shore says, “but they’re out there, eating plastic. Which means we are too.” 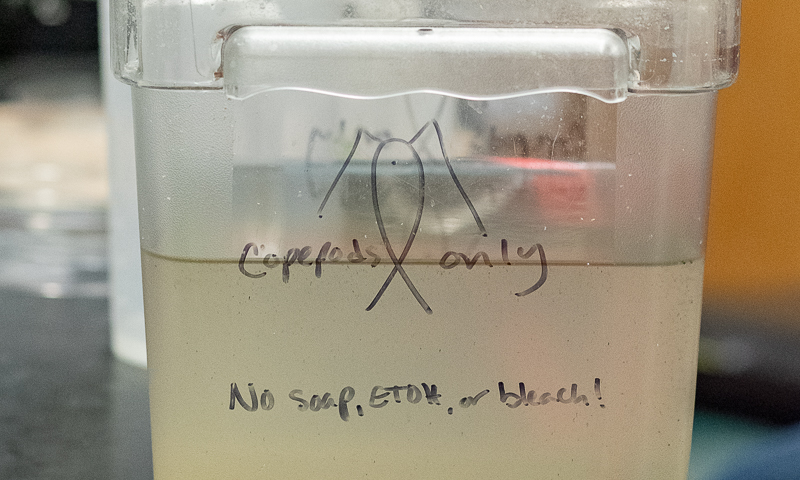