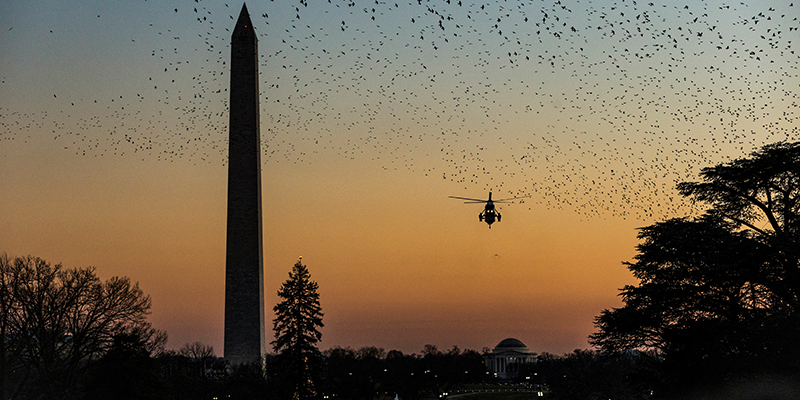 Freelance photojournalist Alex Edelman has captured some of the country’s biggest moments since graduating from UVM in 2013. In general, he says there’s a surreal aspect to this job, a balance of “just another day at work” and front-row seat on history. (Photos: Alex Edelman)

Monday, Dec. 17, 10:30 a.m., Alex Edelman ’13 plays the waiting game that is often the lot of the White House press corps. A freelance photojournalist, who studied English and political science at UVM, Edelman is working for Bloomberg News today. Based in Washington, D.C., his other regular clients include Getty Images, Agence France-Presse, and UPI.

With no public events on the President’s schedule, word is it will be a quiet day. Sitting in a hallway off the Press Room with five other pool photographers, Edelman takes a half-hour on the phone to discuss a selection of his photographs from the last several years. They help tell the story of a remarkable era in politics and offer a window on other aspects of American society. 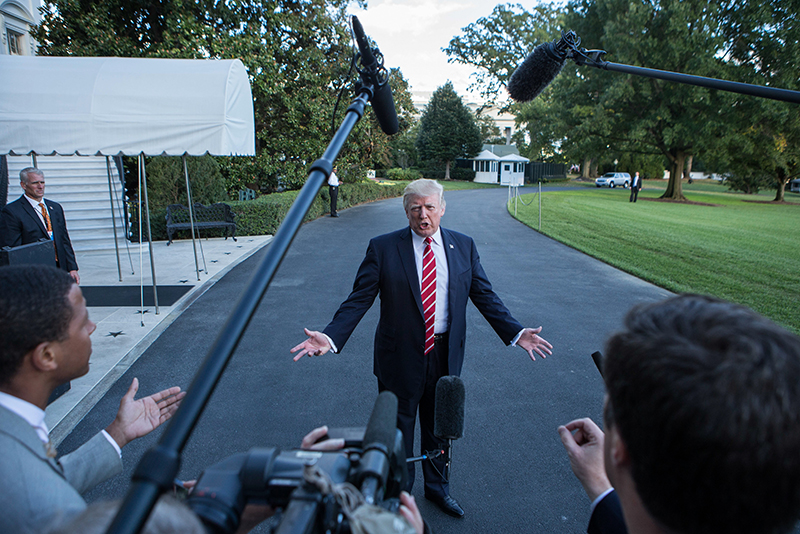 Before boarding Marine One on Oct. 7, 2017, President Trump paused to talk to the press on the South Lawn of the White House. The President’s direct retort to an NBC reporter — labeling his network “fake news” — was a first at that point. In general, Edelman says there’s a surreal aspect to working as a photographer at the White House, a balance of “just another day at work” and front-row seat on history. “I have the most boring and exciting job in the world,” says Edelman — hours and hours and hours of waiting, broken by the intensity of documenting breaking news in real time. 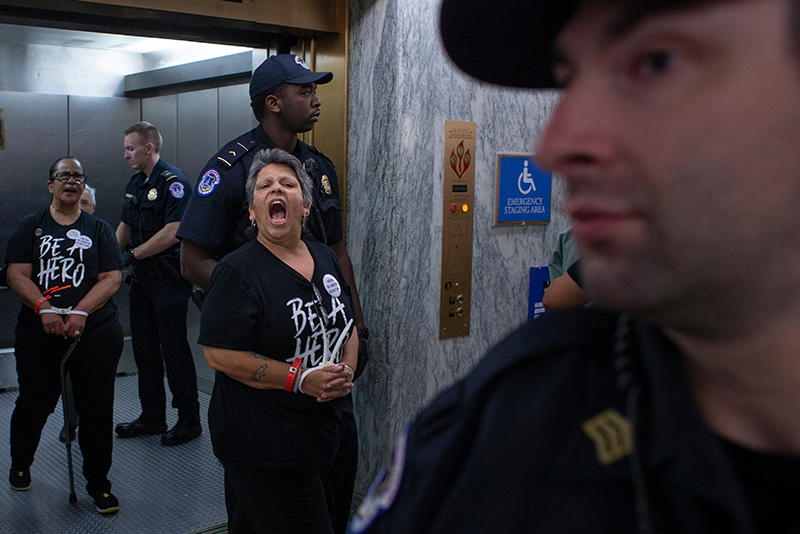 Covering the White House typically means manufactured press opportunities. On Capitol Hill, it’s a very different story. With his press credentials, Edelman roams the building in search of the day’s story. And on Sept. 26, 2018, the protests surrounding the nomination of Judge Brett Kavanaugh for the Supreme Court were clearly the story. Edelman dashed down four flights of stairs and worked around a Capitol police officer for this shot. “My images need to be out to the clients really quickly. It is almost a real time demand,” Edelman says. “With that picture, as soon as I shot it I knew that I had it.” 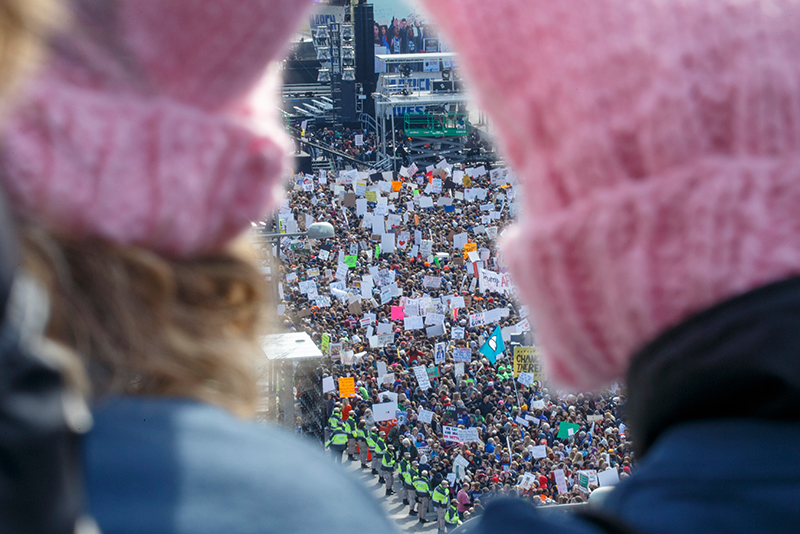 March for our Lives

When the March for Our Lives Rally took place on March 24, 2018, Edelman’s editors assigned him to capture a sense of the size of the crowds. From the top of the Newseum, he trained his lens toward the stage and framed the shot between two women wearing the iconic pussy hats from the Women’s March. “To me, it’s one of the most powerful pictures I’ve had this year — to see these two movements coming together,” Edelman says. 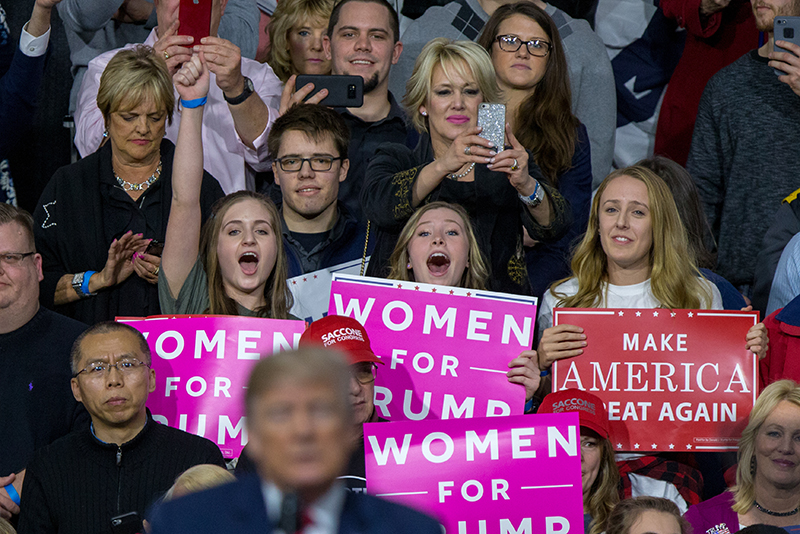 “You’re in a room full of four thousand people who really don’t like you for no good reason other than that someone told them not to,” Edelman says, describing the tension of covering a Trump rally. “The first time someone called me ‘fake news,’ I took it personally, now it is just part of the job.” Edelman’s strategy is simple — introduce himself, “be a human being” — and he’s often able to find a connection beyond the rancor and rhetoric. 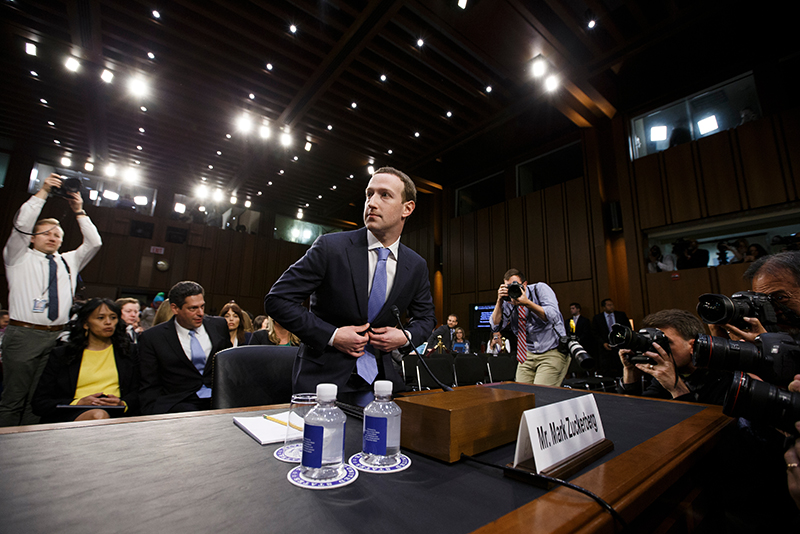 Zuckerberg on the Hill

Alex Edelman was in the thick of the media circus surrounding Mark Zuckerberg’s testimony before the U.S. Senate in April 2018, vying for a shot with 40-some other photographers crouched on the floor between the Facebook CEO and the senators. While the right-hand-raised swearing in ceremony is typically the iconic photo, Edelman favors this shot of Zuckerberg unbuttoning his suitcoat as he sits down. 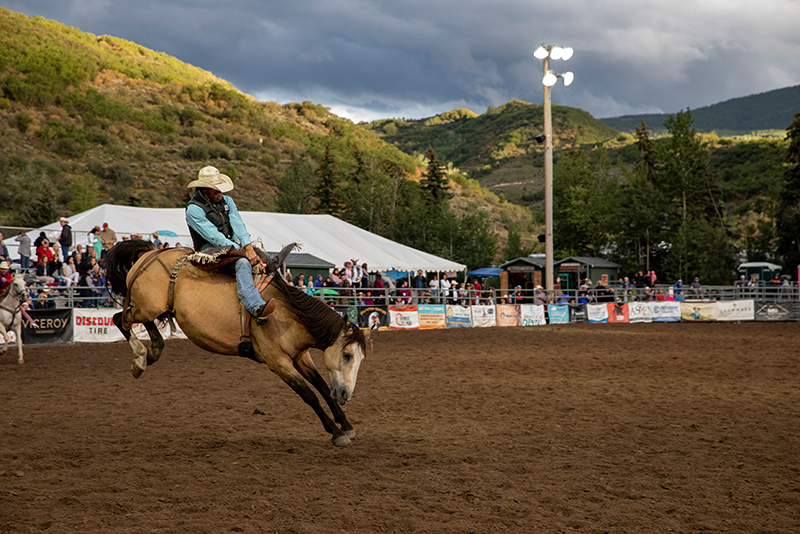 On vacation last summer in Colorado, Edelman noted a rodeo in town, reached out to his editors to see if anyone might be interested in photos, and turned it into an assignment. “I get to creatively investigate things through the camera, feature moments in time that if you’re just casually watching you might not pick up on.” Edelman says. This was, in fact, the photographer’s first rodeo. But it won’t be his last. He now has an assignment to shoot the professional bull riding championships in Las Vegas this winter, with plans to buy a cowboy hat to better blend. 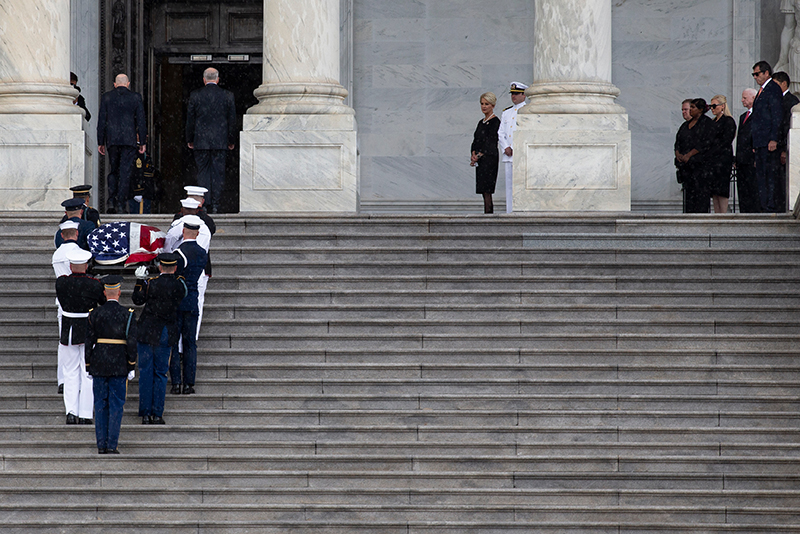 When Edelman began working assignments on Capitol Hill, Sen. John McCain was the first senator to acknowledge him. McCain walked past the press corps covering an Armed Services Committee meeting, noticed Edelman and said, “You’re new.” He shook his hand and welcomed him to Washington. “We fade into the background really easily, that’s our job, we’re supposed to. But Senator McCain made that connection and it meant a lot to me. So, it felt like the closing of a book to photograph his departure,” Edelman says. 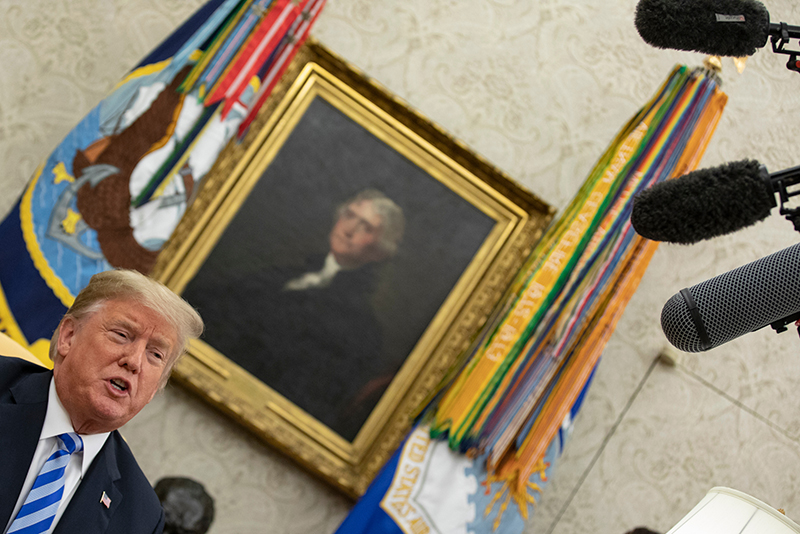 Photographing the President in the Oval Office is an extraordinary assignment that can become ordinary in the daily rounds covering the White House. Edelman says he searches for ways to keep his work fresh. In this shot, he worked to include the boom mics that are usually out-of-frame, compressing power, persona, and media into one image. 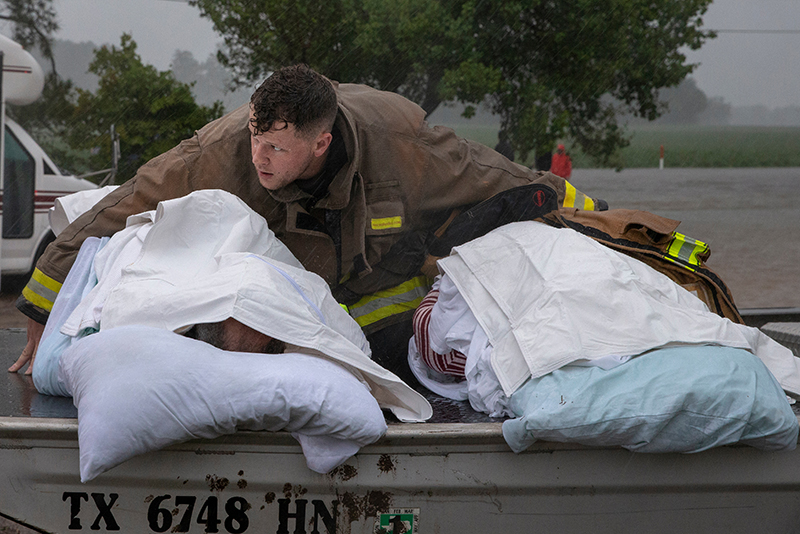 Covering Hurricane Florence, Edelman met a team from the Cajun Navy and asked if he could follow their rescue work. He spent three days with them, bunking at night on the floor of a firehouse in Lumberton, N.C. This image of a Lumberton firefighter helping to evacuate a nursing home was key to motivating Oregon Senator Ron Wyden to call for inquiries into disaster planning at nursing facilities. The senator’s office called Edelman the evening his photo appeared and asked for more background on the situation. “It was the first time that I knew that my work was actually promoting change,” Edelman says. 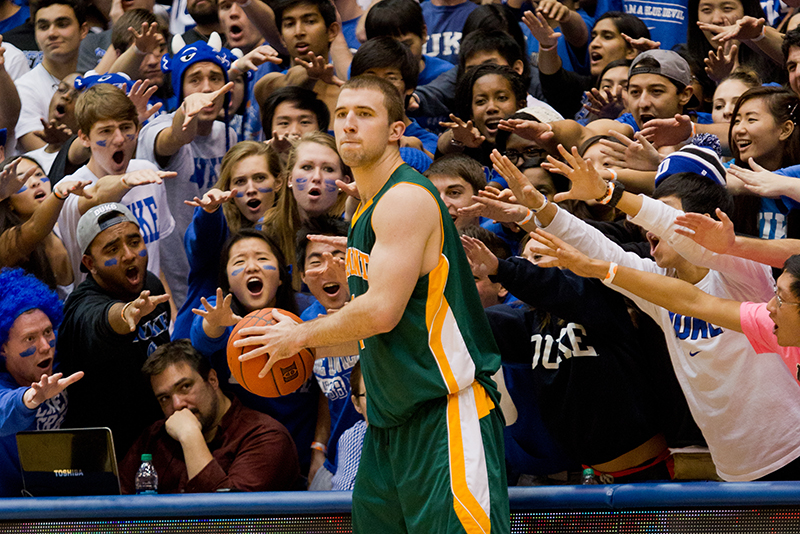 Edelman got his start as a photographer covering games for UVM Athletics, a relationship that began when he chatted with Brian Jenkins, a freelancer who regularly works for UVM, about his craft. He shadowed Jenkins and soon began covering games himself. The chance to be courtside at Cameron Indoor Stadium as the Catamounts took on Duke in November 2013 was a rare opportunity. Brian Voelkel, pictured in-bounding the ball as he’s taunted by the “Cameron Crazies,” and teammates weren’t intimated by a perennial powerhouse playing at home in a packed gym. Candon Rusin’s near-winning shot fell a split second after the buzzer. Photojournalist and stalwart UVM basketball fan, Edelman says, “I know Duke was scared.”