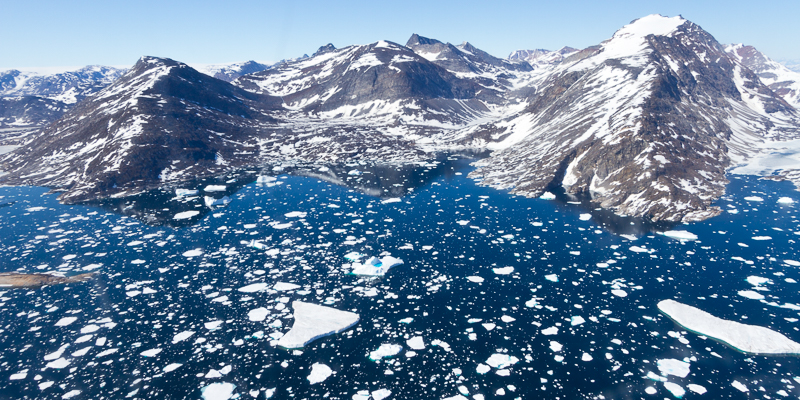 How much of Greenland's ice melted during past periods of global warming? Two first-of-their-kind studies in Nature look much deeper into the history of Greenland than ever before—including one led by UVM geologist Paul Bierman, "The melting we are seeing today,” he says, “may be out of the bounds of how the Greenland ice sheet has behaved for many millions of years." (Photo: Joshua Brown)

The ice sheet covering Greenland is four times bigger than California — and holds enough water to raise global sea-level more than 20 feet if most of it were to melt. Today, sea levels are rising, and the melting of Greenland is a major contributor. Understanding how fast this melting might proceed is a pressing question for policymakers and coastal communities.

To make predictions about the future of the ice sheet, scientists have tried to understand its past, hoping to glean what the ice was doing millions of years ago when the Earth was three or more degrees Fahrenheit warmer than it is now. But our understanding of the ice sheet's complex behavior before about 125,000 years ago has been fragmentary at best.

Now, two first-of-their-kind studies provide new insight into the deep history of the Greenland Ice Sheet, looking back millions of years farther than previous techniques allowed. However, the two studies present some strongly contrasting evidence about how Greenland's ice sheet may have responded to past climate change — bringing new urgency to the need to understand if and how the giant ice sheet might dramatically accelerate its melt-off in the near future.

The two new studies were published online in the journal Nature on Dec. 7, including one led by University of Vermont geologist Paul Bierman.

Ice on the east

Bierman and four colleagues — from UVM, Boston College, Lawrence Livermore Laboratory, and Imperial College London — studied deep cores of ocean-bottom mud containing bits of bedrock that eroded off of the east side of Greenland. Their results show that East Greenland has been actively scoured by glacial ice for much of the last 7.5 million years — and indicate that the ice sheet on this eastern flank of the island has not completely melted for long, if at all, in the past several million years. This result is consistent with existing computer models.

Their field-based data also suggest that during major climate cool-downs in the past several million years, the ice sheet expanded into previously ice-free areas, "showing that the ice sheet in East Greenland responds to and tracks global climate change," Bierman says. "The melting we are seeing today may be out of the bounds of how the Greenland ice sheet has behaved for many millions of years."

Since the data the team collected only came from samples off the east side of Greenland, their results don't provide a definitive picture of the whole Greenland ice sheet. But their research, with support from the National Science Foundation, provides strong evidence that "an ice sheet has been in East Greenland pretty much continuously for seven million years," says Jeremy Shakun, a geologist at Boston College who co-led the new study. "It's been bouncing around and dynamic — but it's been there nearly all the time."

The other study — led by Joerg Schaefer of Lamont-Doherty Earth Observatory and Columbia University, and colleagues — looked at a small sample of bedrock from one location beneath the middle of the existing ice sheet and came to what appears to be a different conclusion: Greenland was nearly ice-free for at least 280,000 years during the middle Pleistocene — about 1.1 million years ago. This possibility is in contrast to existing computer models.

"These results appear to be contradictory — but they may not be," UVM's Bierman says. He notes that both studies have "some blurriness," he says, in what they are able to resolve about short-term changes and the size of the ancient ice sheet. "Their study is a bit like one needle in a haystack," he says, "and ours is like having the whole haystack, but not being sure how big it is."

That's because Schaefer and colleagues' data comes from a single point in the middle of Greenland, pointing to a range of possible scenarios of what happened in the past, including several that challenge the image of Greenland being continuously covered by an extensive ice sheet during the Pleistocene. In contrast, Bierman and colleagues' data provides a record of continuous ice sheet activity over eastern Greenland but can't distinguish whether this was because there was a remnant in East Greenland or whether the ice sheet remained over the whole island, fluctuating in size as the climate warmed and cooled over millions of years.

"It's quite possible that both of these records are right for different places," Bierman, a geology professor in UVM's College of Arts and Sciences. "Both of these studies apply a similar innovative technique and let us look much farther into the past than we have been able to before."

Both teams of scientists used, "a powerful new tool for Earth scientists," says Dylan Rood, a scientist at Imperial College London and a co-author on the Bierman-led study: isotopes within grains of quartz, produced when bedrock is bombarded by cosmic rays from space. The isotopes come into being when rock is at or near Earth's surface — but not when it's buried under an overlying ice sheet. By looking at the ratio of two of these cosmic-ray-made elements — aluminum-26 and beryllium-10 caught in crystals of quartz, and measured in an accelerator mass spectrometer — the scientists were able to calculate how long the rocks in their samples had been exposed to the sky versus covered by ice.

This isotope technique has been used for several decades for measuring land-based erosion, but this is its first application to ocean core samples, said Lee Corbett, a postdoctoral researcher at UVM and co-author with Bierman. "This has never been attempted with marine sediments," she says. Their results overcome a basic problem of trying to discern the deep history of ice from bedrock: every time an ice sheet retreats and then grows back, it scours away the bedrock and the isotope record of its own past. "It's hard to discern an ice sheet's cycles on land because it destroys the evidence," she says, "but it dumps that evidence in the oceans, archived in layers on the bottom."

Now Corbett, Shakun, and others are applying this isotope technique to additional cores taken from around the coast of Greenland to get a more complete and in-focus picture of the whole ice sheet's long history. And they have already applied the new isotope technique far beyond Greenland — particularly in exploring the much larger, more mysterious ice sheets covering Antarctica.

"These two apparently conflicting — but not necessarily conflicting — studies in Nature really force the issue that we don't know enough about how ice sheets work over deep time," Bierman says. "We must recognize the importance of advancing polar science to understand how our world works. And, right now, because we're pumping huge plumes of greenhouse gases into the atmosphere, we really need to know how our world works."

The dynamics of Antarctica's giant ice sheet is full of questions and the disastrous potential. "But there's enough sea-level rise tied-up in Greenland alone to put a lot of cities and long stretches of coastline underwater," says Paul Bierman, "including Donald Trump's property in Florida." 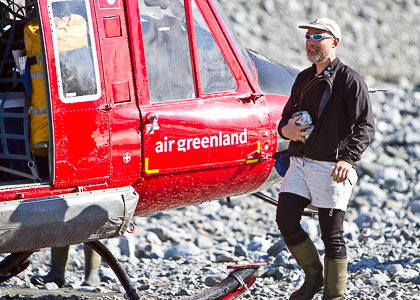 UVM geologist Paul Bierman collects rocks at the outflow of a glacier on the southeast coast of Greenland. He’s traveled there many times, often by helicopter, seeking answers to how the fast the ice sheet that covers the island will melt in a warmer worl