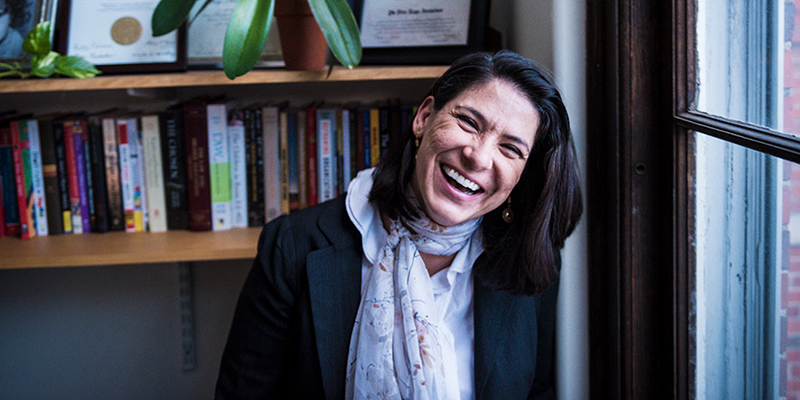 A first-generation child of an immigrant herself, assistant professor Tracy Ballysingh has dedicated her career to improving the experience of underrepresented students. (Photo: Ian Thomas Jansen-Lonnquist)

For most of her professional life, Tracy Arámbula Ballysingh, assistant professor of Higher Education and Student Affairs, has worked as a practitioner in jobs she thought would most positively impact the population she now dedicates her academic life to uplifting: first-generation students from low-income families trying to overcome society’s structural inequalities.

Initially skeptical of the impact she could make as an academic, Ballysingh taught pre-K through eighth grades in four states where she saw first-hand the challenges low-income students of color face. Taking a more legislative approach, she later worked as a policy analyst for the Texas State Senate’s Higher Education Committee. Eventually, she sought change as director of student success programs at The University of Texas at Austin, where she created programming to help first-generation, low-income students adjust to college.

“I’ve always been interested in how structural inequalities shape life outcomes, especially for low-income people,” says Ballysingh, who served in a key leadership role for the American Association of Hispanics in Higher Education while in graduate school. “The thread of education, beginning with experiences as early as pre-K and throughout K-12, shape life outcomes because they place students on a path to higher education.”

The idea that she could positively affect student success as an academic didn’t come until the second year of her doctoral program at UT- Austin during a class on equity and access in higher education.

“The class blew my mind and lit a fire under me,” recalls Ballysingh. “I remember telling a friend about the structural inequalities and myth of meritocracy I was learning about and said something like, ‘I’m gonna do something about it.’ He laughed at me and said, ‘Yeah, what are you gonna do Tracy?' I was shocked by his minimizing the significance of my learning and his disbelief that I could actually make change in society through it. That was a pivotal moment for me.”

Ever since, Ballysingh has been producing top-tier research focused on Latinx rates of college completion, the educational outcomes for boys and men of color, first-generation college students, the first-year experience in college, and the role of Hispanic-Serving Institutions (HSIs) in higher education. “A lot of the current literature is focused on deficit perspectives of academic success for Latinx students,” she says. “There is not enough positive framing. Even if it’s just scholars reading it, I feel as though if I highlight positive aspects of Latinx students that other people aren’t, then that’s a contribution at least for our knowledge base as a society.”

Ballysingh just finished a turn as guest editor of a special issue published by the Association of Mexican American Educators Journal titled, “Answering the Call: Hispanic-Serving Institutions as Leaders in the Quest for Access, Excellence, and Equity in American Higher Education.” In the introduction, she makes the case for more research on the increasingly critical role of HSIs as key access points for large numbers of low-income, first-generation Latinxs, and other students of color.

Ballysingh also co-authored one of the issue’s articles titled, “A Critical Look at Perspectives of Access and Mission at High Latinx Enrolling Urban Universities,” examining the commitment of administrators at four urban campuses to the fulfillment of an access- and diversity-centered mission. “Considering today’s context of higher education — whereby access and opportunities for Latinx and other marginalized populations has become increasingly stratified — this timely work seeks to foster dialogue regarding how to best uphold an access-centered mission,” writes Ballysingh.

'My existence is resistance'

Ballysingh believes her background as a low-income, first-generation child of an immigrant is an essential driver of her impact on research and in the classroom as a professor. “As an under-represented faculty member in a predominantly White institution, my existence is resistance,” says Ballysingh.

Despite initial concerns about being able to continue her line of research in Vermont – a state with a Hispanic population of 1.6 percent, Ballysingh has managed to expand her focus by including the experiences of students of color at UVM. She would ultimately like to focus her efforts on the experiences of New American students in the Burlington area, who come from a broad range of countries.

“A lot of these students are refugees who are falling off the pipeline in high school and not matriculating to college like the Latino students I worked with in Texas," she says. "My niche here in Vermont is on that broader population. Fortunately, as a Latina I cultivated a strong network of scholars in graduate school who were interested in similar issues, so I’ve also been able to continue work on Latinx educational success even though there aren’t many Latinxs in Vermont."

Ballysingh has also joined College of Education and Social Services faculty members Bernice Garnett, Lance Smith and Colby Kervick on a community action research team to address disparities in punitive discipline for both people with disabilities and persons of color in the Burlington School District. Their goal is to transform disciplinary practices from punitive and exclusionary to those grounded in a restorative justice model with the help of community partners. This includes students, teachers and administrators, as well as UVM students interested in conducting research and affecting change.

“I think I delayed entry into academia for so long because I thought I could have more of an impact as a teacher or academic advisor or by doing policy or as an administrator," says Ballysingh. "Now I try to find a balance by producing research that improves the experience for underrepresented students and helps practitioners, and by working with students in the community like with the restorative practices research team."

A recent thank-you email from a HESA admissions candidate thanking Ballysingh for sharing her personal journey to higher education brought her academic purpose into stark focus. “Your accidental discovery of your passion for teaching others and advocacy is something that deeply resonates with me,” wrote the student. “I rarely get the chance to hear stories about other first-generation college students.”