The Art of Social Justice 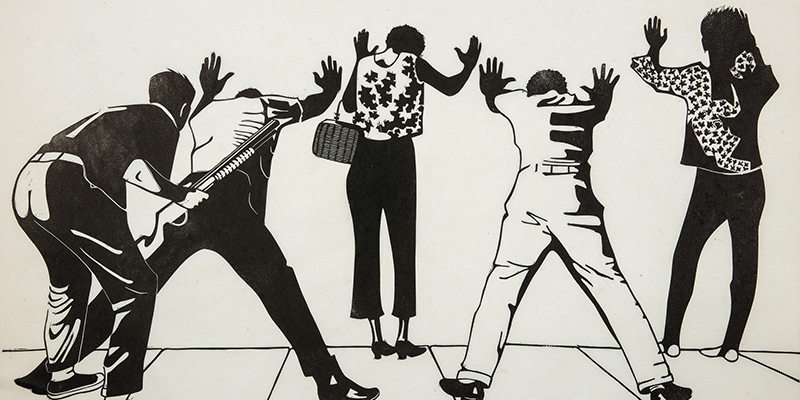 “Plainclothesman and Residents: Watts,” a black-and-white linocut by Vermont-based artist Sabra Field, deviates from the vibrant colors and rural landscapes Field is known for, but it is this politically charged print that sets the tone of the student-curated exhibition “RESIST! INSIST! PERSIST!” currently on display at the Fleming Museum of Art.

Off the Marble Court at the Fleming Museum of Art, a striking print signals visitors to a modest, one-room exhibition in which the piece is currently featured. A black-and-white linocut, the print depicts the backsides of four black bodies holding themselves up against an off-white wall. Their hands are up, heads down, feet spread apart. They appear to be waiting their turn for a pat-down by a man clutching a rifle in his right hand. This is the first piece of artwork guests see in the small exhibition, which announces itself with a punch: “RESIST! INSIST! PERSIST!”

According to art history professor and associate dean of the College of Arts and Sciences Kelley Helmstutler Di Dio, the image at the literal center of the show is rather unusual for Sabra Field, a Vermont-based artist who’s known for colorful landscapes. “It is not at all what you would expect for a Sabra Field print to look like,” she says. For this piece, “Plainclothesman and Residents: Watts,” Field relinquished her vibrant colors and scenery and instead opted for stark contrast to capture a fearful moment of the 1965 race-related Watts riots, which left 34 dead in Los Angeles.

Provocative and thoughtful, “RESIST! INSIST! PERSIST!” features work from acclaimed artists like Pablo Picasso, Kara Walker, Francisco de Goya, Mildred Beltré, Diego Rivera and the Guerrilla Girls—nearly all from the Fleming’s permanent collection. Together, the artwork engages in a bold conversation about racism, state oppression, sexism and other social justice issues that have raged on for centuries. “In investigating these issues, we will encounter some controversial and distressing images and ideas, but we must not shrink from them. As citizens of this messy world, we have a duty to address our past, ugly as it might be, and use what we learn to shape a better future for ourselves and those who succeed us,” write the show’s curators, students of Di Dio’s fall 2018 museum studies class.

Yes, students. “They did a really great job with it,” Di Dio says. “One of the wonderful things about the class is that I did not dictate how the show was going to turn out or what the focus was going to be.” Di Dio instead guided the class through difficult conversations about the histories of museums and art, curation processes and career possibilities, while fully immersing her students in real-world exhibition creation. They collaborated on a proposal for “RESIST! INSIST! PERSIST!” complete with original curation, layout design, educational materials, artifact labels and research, which they presented at the end of the semester to the Fleming Museum for consideration. While the proposal had been built into the curriculum, Di Dio periodically reminded her students that the museum was in no way obligated to accept it.

But what appears now in the Fleming is nearly identical to what the students originally envisioned a year ago. Peering over her shoulder at the exhibition she helped build, Anna Duckworth ’20 gives the museum a nod for bringing their vision to life. “I'm just thinking about the exhibition design and I'm pretty sure it's spot-on. The wall texts are all where we thought they were going to be. I think it's pretty close to what we presented to them,” says the art history and art education double major and museum studies minor.

While Duckworth has long aspired to work in a museum, the pertinent class almost wasn't in the cards for her. She admits the lure of free pizza is what really drove her to the art history information session where she first learned about the special seminar course, and, when the time finally arrived to register, the class conflicted with her schedule that had filled with double major and minor requirements. Determined to take the class, she asked to participate through an independent study. “A class like this only comes around so often, you know? It’s such a unique opportunity. I couldn’t see myself not taking it, that wasn’t an option for me,” she says.

But what Duckworth found when she dug into the readings and curriculum was a bitter pill to swallow. “Institutions are absolutely historically racist, and the collections that they have reflect that racism and other kinds of privileged identity,” says Di Dio. “Curators have to pull from the objects that are in the museum's collection. They've got to be able to manage that as best as they can. It's not easy, and I think the students and I were made even more aware about how important that work is as we were digging into the material. It takes a great deal of time, a lot of conversations and learning.”

In addition to researching, curating and planning a social justice art exhibition from scratch, Di Dio also wanted students to consider how exhibitions and objects are curated and to “approach the process with a greater understanding of historical and institutional biases. We need to counteract that when we are working as curators or working in other areas of a museum,” she says.

For students like Duckworth, the revelation that these places could be biased, racist, sexist or prejudice—the very characteristics they were supposed to confront in class through art—was unsettling.

“The most challenging thing for me was learning that museums are, in many ways, quite bad. They've had a long history of racism and sexism, and they cater to people who give money—typically rich, white men. As a young, white woman who wants to go into a career in museums, that was hard for me and I'm still struggling with accepting that a place I thought was perfect and a vehicle for change is actually so institutionalized,” she says.

In fact, one of the pieces of artwork included in “RESIST! INSIST! PERSIST!” reflects on museum bias and specifically calls out New York’s Metropolitan Museum of Art for being gender exclusive. A color print by the Guerrilla Girls, an anonymous group of female artists and activists, portrays an altered version of the famous nude portrait “Grande Odalisque” by Ingres with a gorilla mask over the female subject’s head. Above the altered image, the artists ask: "Do women have to be naked to get into the Met. Museum?" According to the group’s most recent count, “Less than 4% of artists in the Modern Art section are women, but 76% of the nudes are female.”

Though the class considered and researched dozens of works of art from the Fleming for the show, they democratically dwindled down the list to the select pieces that currently hang in the exhibition today. Each student was individually responsible for researching and writing the label for at least one work of art featured in the show. Duckworth’s piece—a self-portrait photograph by artist, activist, model and photographer Matuschka—hangs just to the right of the Guerrilla Girls’ print. In it, a nude Matuschka makes a statement on femininity and health as she bears the scars from a mastectomy she had when she was diagnosed with breast cancer at age 37.

“Every time I look at it, I still feel a divine feminine energy coming from it. I think it's very powerful. She’s a cool lady,” Duckworth says of Matuschka—and she would know. Duckworth didn’t just research the portrait and its significance to the artist. She actually spoke to Matuschka herself for the class, on the phone, for more than an hour about the photograph, her work and her experience as an artist. “Matuschka was very integral into my writing of that label. I couldn't have done it without her,” she says.

While the average visitor won’t know how many hours of discussion, deliberation and consideration went in to the creation of “RESIST! INSIST! PERSIST!”—from the meaning of the word “activism” and its exclusion from the show’s title to the use of punctuation in each label—laboring so intensely over the small yet salient exhibition provided Duckworth a fresh perspective on an old acquaintance. “I still can’t even quite fathom the amount of time and minds that go into creating a show at places like the Met and the Louvre and all the other museums.”

The student-curated exhibition “RESIST! INSIST! PERSIST!” is on display at the Fleming Museum now through December 13.