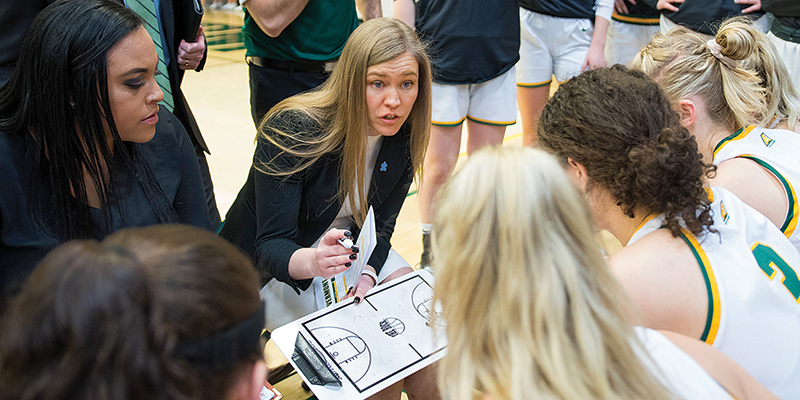 On February 1, before tip-off of the Catamount women’s basketball home game versus UAlbany, Director of Athletics Jeff Schulman ’89 G’03 shared landmark news: the largest gift ever made exclusively to a UVM women’s athletics program would permanently endow the Elizabeth F. Mayer ’93 and Paul J. Mayer, M.D. Women’s Basketball Head Coach at the University of Vermont.

“We would like to thank these beautiful and wonderful student-athletes for using both their basketball and academic skills,” said Betty Mayer as the news was released. “Their drive for perfection and their special individual personalities working together as a team are evident. They share that personal relationship with us, their fans, and the young people who look up to them as role models.”

This next step for women’s basketball was years in the making, tracing to pioneering varsity athletes, the strides of Title IX in the early 1970s. Fittingly, the announcement of the gift was coupled with a broader celebration of girls and women in sports.

Considering Catamount women’s basketball, in particular, the breakout teams of the early nineties are foundational. Across the 1991/’92 season coach Cathy Inglese’s Catamounts piled up a 29-0 record in the regular season and earned a first-ever trip to the NCAA Tournament. Incredibly, the next season’s team repeated that undefeated regular season run.

“Looking back, we had such a level of trust and respect for each other that it became a transformative experience. Maybe it’s a comfort level, maybe it’s a defining-who-you-are level, but we have been through so much together that you feel you can just call each other up and it’s still like you are sisters,” Jen Niebling ’93 reflected in 2011 on the twentieth anniversary of the win streak.

Inglese, who passed away last year due to a traumatic brain injury suffered in a fall, also reminisced in 2011 on her thoughts competing in that first NCAA Tournament: “Win or lose, look at what we have accomplished. All these people are getting such joy and pleasure out of watching our team. We changed the attitude of what women athletes could do.”

Dr. Karalyn Church, a major force on the Catamount teams at the turn of the century, recalls the conference championship victory over Maine: “I remember the feeling when I realized that all systems were a go, every single player on the team was in full form and I knew we were going to crush them. Patrick Gym was packed, my teammates were on fire and I felt like I had the front row seat on a fully loaded locomotive.”

Ten years later, May Kotsopolous ’10 would be among the players helping lift the program to another first, a victory in the NCAA Tournament, with an upset of seventh-seeded Wisconsin. She was among more than twenty former Catamount women’s basketball players, a sisterhood across eras, who returned for the celebration of the new endowment and women’s athletics.

Betty and Paul Mayer’s love for UVM women’s basketball team began during the years when Kotsopolous and teammates such as Courtnay Pilypaitis ’10, Alissa Sheftic ’10, and Sofia Iwobi ’10 flourished playing for Coach Sharon Dawley. The bond would strengthen, as Dawley’s successor, Lori Gear McBride, introduced having players mingle with fans after games. “It is there we began to appreciate how really special these ladies really are, each with unique skill sets and aspirations,” Paul Mayer said.

A major health crisis in late 2016 left Betty Mayer unable to manage the Patrick bleachers. But, with sideline seats in front of the band, the Mayers were in the gym for a men’s basketball game. When the Catamount women’s team, watching the game from the bleachers, spotted Betty, they came down and rallied for a group hug. “That expression of love and concern was the ‘penicillin’ that facilitated Betty’s recovery and made us consider how we could give back to this program,” Paul Mayer said.

Second-year Head Women’s Basketball Coach Alisa Kresge becomes the first-ever women’s coach at UVM to hold an endowed position and also the first in the history of the America East conference. With their gift, the Mayers have added UVM to a short list of universities with endowed women’s basketball coaches that includes Stanford, Notre Dame, Cornell, Dartmouth, Drake, and the University of Miami.

The Cats defeated UAlbany by double digits on February 1, another big moment in a big day for UVM women’s basketball and another signal of a bright path ahead for the program. “As I look at our starting five who are playing today, I see flashes of that great team of 2008-2010,” Paul Mayer said. “We felt more was needed as a thank you to this team and the ones that will follow.” 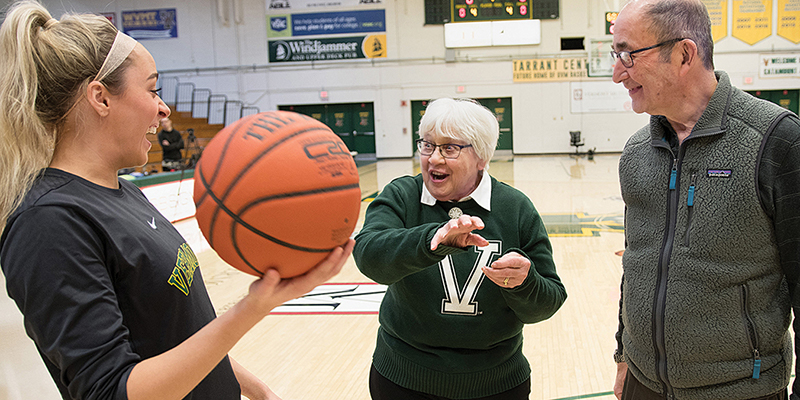 Betty and Paul Mayer, pictured with guard Emma Utterback, say they think of the Catamount basketball players as their granddaughters.