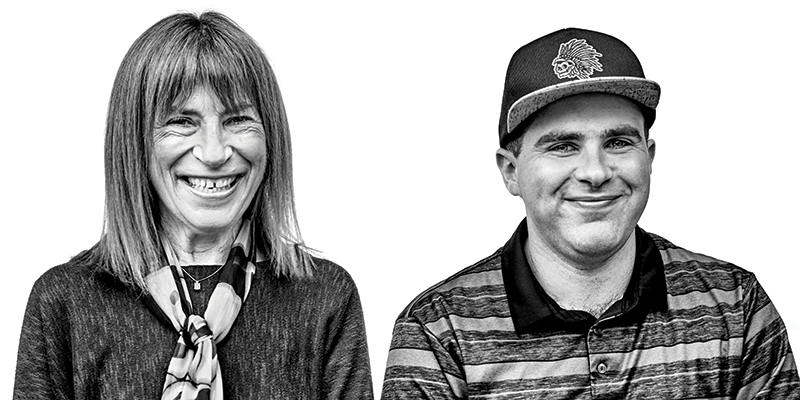 Reflecting on the fundamental allure that a career in the film industry held for her, Yudi Bennett G’74 confesses to childhood dreams of running away with the circus. Joking that she doesn’t have the athleticism of a trapeze artist, she offers that she does have one essential trait, a personality suited to the big top life on the road that the movie business offers. “You are going different places every day and every day is different,” she says. “I loved the craziness of it.”

Bennett built a distinguished career, earning her the 2003 Frank Capra Lifetime Achievement Award from the Directors Guild of America. But that vagabond existence making films on location was just her first act. The second began to take shape in the early 2000s, when her life became increasingly grounded at home in Los Angeles with her son, Noah.

In 2006, striving to help Noah and fellow young adults with autism develop vocational skills creating computer animation for film and television, Bennett co-founded Exceptional Minds. Under her leadership it would thrive, impacting many lives and gaining wide attention in the media, including a story on NBC Nightly News. Bennett is featured in a new book titled Becoming an Exceptional Leader: Inspiration from 14 accomplished disability changemakers, and actress Patricia Heaton shares the alumna’s path in Your Second Act: Inspiring Stories of Reinvention.

After studying journalism and photography as an undergraduate at Simmons College, Yudi Bennett came to UVM for a master’s program in communications. At the time, those circus dreams had turned to dreams of traveling the world on staff at National Geographic. But influential professors and experiences at UVM would turn her focus to film.

She can still recall her precise film history courses taught by Professor Frank Manchel. And she found a mentor in Professor Kim Worden, who guided her thesis project, a documentary on the history of the Old Red Mill in Jericho, Vermont, then under threat of demolition. Her film boosted efforts to save the mill and won a collegiate film competition sponsored by the National Trust for Historic Preservation. Forty-six years later, she laughs while talking some trash about beating out entries from New York University and Harvard, then adds, “UVM made an enormous difference in my life.”

Career breaks, particularly the foot-in-the-door kind, often don’t seem like much at the moment. So it was when Worden alerted Bennett to a film shoot in Stowe looking for production assistants. She quickly hitchhiked up from Boston that summer. Together with friend Ann Curran G’75, she applied, learned that the $25-a-day in pay they’d assumed was actually $25-a-week, but signed on nonetheless. A low-budget production meant a chance to gain broad experience, and she built her first relationships in the business on that set. When, UVM master’s diploma in hand, she moved to New York City, she connected with the people she had worked with in Vermont and began getting work.
Those early jobs weren’t glamorous. Production assistant on documentaries, commercials, stitching together a living and building credentials. It’s a lesson she would share with today’s UVM Film and Television Studies majors when it comes to launching a career: “Be willing to do anything.”

After two years in New York, Bennett was accepted into the Directors Guild of America’s apprentice program. She then worked her way up to second assistant director roles, making another key step when Alan Alda asked her to be first assistant director on The Four Seasons. The antithesis of “fake it ’till you make it,” she made sure he knew it would be her first time working at that level. Alda, who was directing his first film with the production, said, “We’re a perfect match, neither of us has done this before.” They would pair up on four more films, simpatico in their commitment to leading film shoots with clear communication, low drama, and basic human kindness.

Bennett would earn credits, many of them as first assistant director, on more than thirty films across approximately thirty years. Kramer vs. Kramer and Broadcast News, iconic films of the era, are among the slew of projects listed on her IMDb page.

Bennett’s life and career would shift dramatically in 2003 with the loss of her husband, Bob Schneider, to cancer. She continued working as an assistant film director until 2006, but son Noah’s needs were too significant to balance the long, erratic hours of work on movies and life as a single parent. She stepped back. And, in that stepping back, the next act of her career in film began to emerge.

A turning point arose when Noah reached a period in middle school when he plateaued academically. “That’s your fear as a parent; you always want to see your kids moving forward,” Bennett says. Seeking other ways to engage him, she found an after-school class in computer animation. Noah took to it immediately—making animations, entering school competitions, winning prizes. “Within two or three weeks, he knew it inside out, surprised everybody.”

Bennett and fellow parents of teenagers with autism came to see that this work could be more than a diversion; it could provide critical vocational training to address the high unemployment rates and lack of program support that young adults with autism and their families face after high school. In 2006, Exceptional Minds launched with Bennett as a volunteer staff member. Soon, she took on a full-time paid role, leading the operation as the studio grew over the next six years.

Today, Exceptional Minds is many things—at its core still a full-time, three-year educational program in film animation for young adults with autism. They also run an in-house professional visual effects and animation studio, staffed by graduates of the program, that handles contract work. And there are summer programs, two-week workshops for younger kids, and private lessons. Bennett notes they’ve connected with students in all fifty states and many different countries. And graduates of the program include the young man who inspired it, Noah Schneider.

If you’ve seen Marvel productions such as Black Panther and Captain America, Star Wars chapters such as The Rise of Skywalker and The Last Jedi, or a certain HBO series called Game of Thrones, you’ve seen the work of Exceptional Minds.

These days, Bennett’s work is more broadly focused on autism advocacy, working with organizations such as the Uniquely Abled Project and Foothill Autism Alliance. She also remains involved with the Directors Guild, as a volunteer trustee for the DGA Pension & Health Plan.

Reflecting on what Exceptional Minds has become over the past fourteen years, Bennett lists the array of programs, the credits earned on Oscar-nominated movies, the jobs graduates have landed at places like Marvel Studios and Cartoon Network. Then she sums it up with the deepest payoff of all: “The really amazing and gratifying thing about this is that a lot of these young people’s lives have just been changed forever.”

Any discussion of UVM alumni in the film business must include the name of Jon Kilik ’78, producer of many top films, from Do the Right Thing to Babel to The Hunger Games.

Yudi Bennett keenly recalls the day Kilik showed up at her home at 22 King Street in Manhattan’s West Village. “My door buzzed and I went down and it was this kid who had just graduated UVM. Kim Worden had told him to look me up and there he was on my doorstep, saying could you help me get a job,” she says. Poised to catch a cab to the airport for a film shoot in Florida, she cut a quick deal with Kilik: help me get all of my stuff down from the fifth floor and into the cab, get in touch when I’m back, and I’ll help you as best I can.

Kilik’s own memories of that first meeting could be Exhibit A for how to make the most from just a thread of connection. He’d prepared to meet Bennett by watching the historic preservation film she created at UVM and came poised to share his passion for and knowledge of film.

Kilik delivered on hustling the luggage down five flights, and, weeks later, Bennett delivered on her offer to help, giving the young grad a single day to prove himself as a production assistant on set. “It worked out,” Kilik says. They’d go on to work on multiple films together, including several for noted director Paul Mazursky, as Kilik learned new roles and built his own credentials and career. Through the decades, they’ve continued to collaborate and stay in touch, and Kilik has been a stalwart supporter of Exceptional Minds.

Kilik has high praise for Bennett’s work as a pioneering woman in leading film sets as a first assistant director. “She was one of the best assistant directors ever to work. She had to be. That glass ceiling was hard to break in the late 1970s,” he says. And he’s deeply grateful to her for taking the time to listen to that kid on her doorstep. “Yudi Bennett is a true angel. Mine is one of the thousands of lives she has changed for the better,” Kilik says. “To say I owe my career to her is not an overstatement. She was my on-the-job training. She was my paid graduate school. She was my mentor and friend.”