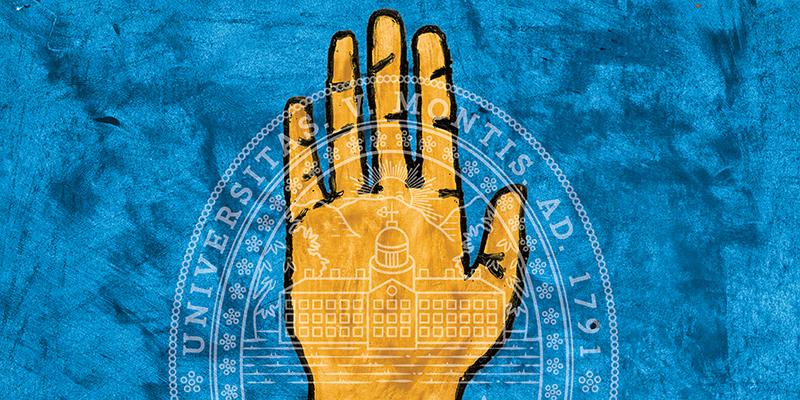 The conviction to do good is a hallmark shared by generations of Catamounts—from John Dewey, Class of 1879, and his lasting contributions in education and democracy, to Jody Williams ’72, recipient of the 1997 Nobel Peace Prize for her leadership of the International Campaign to Ban Landmines, to the myriad alumni whose first stop after graduation is Peace Corps service.

No, it’s not something in the Lake Champlain water or the mountain air. It’s a continuous thread woven into the fabric of UVM’s tapestry. Studiis et Rebus Honestis, in the words of our university seal. For studies and other honest pursuits. In this issue we catch up with a number of alumni who, in their work founding and leading nonprofit organizations, prioritize people and honest pursuits above all else.

Photograph by Sergio Flores for The Washington Post via Getty Images

DETENTION IS THE NEW PRISON

If you’re a fan of Netflix’s hit show Orange Is the New Black (OITNB), you might be more familiar with Christina Mansfield’s nonprofit than you realize. That’s because (don’t worry, you won’t find any spoilers here) it makes a brief cameo in the show’s latest and final season. In fact, as co-founder of Freedom for Immigrants, Mansfield ’03 helped OINTB’s creators develop a key plot point and setting of the show’s seventh season.

While revelations about family separations, cages, and human rights violations in immigration detention centers dominate headlines today, Mansfield has been working since 2012 to abolish the detention system, support those currently detained, and illuminate the grim truth about life in these detention centers.

“As much as possible, I try to encourage folks to not look away. Even though it’s sort of a lot to handle, that’s what’s happening in this country right now,” she says.

Detainees can find themselves in these prisons through a number of ways—ICE raids, declaring asylum at a port of entry, and inadequate identification to name a few. Once detained, they are likely to begin a chain of transfers to and from different detention centers around the country while they wait for their immigration case to be decided, all without access to a free phone call to alert their families or receive legal counsel.

“The whole immigration detention system is resting on the assumption that if we don’t imprison people for what can be months or years while they await their immigration cases to process through the courts, they will not show up to their court hearing. And this is a completely false assumption,” Mansfield explains.

“It’s so important for all of these affiliates to be in communication with each other. If a person you’ve been visiting for months at a particular facility gets transferred across the country—and it always happens without warning—then we can often make sure that person continues to be supported and accompanied by a different Freedom for Immigrants affiliate in another part of the country,” Mansfield says.

Though the detention facility that Mansfield helped OINTB develop is fictious, the circumstances surrounding it are not. To make a real difference and a lasting impact on this front, OINTB established the Poussey Washington Fund (named after a character) that financially supports eight advocacy groups—including Mansfield’s Freedom for Immigrants—in their efforts to tackle challenging social justice issues.

THE DOCTORS ARE IN

These days, information and people move faster, farther, and more efficiently around the world than ever before. But what if we could move world-class cancer treatment with the same ease? That’s what Dr. C. Norman Coleman ’66, Hon.’15 and Lawrence Roth ’67 have teamed up to achieve through International Cancer Expert Corps (ICEC).

Between the two of them, they have spent years living abroad in isolated and underserved locations. Coleman—a renowned oncologist and radiologist whose work has taken him throughout the world—and Roth—a successful businessman who volunteered in the Peace Corps and for Catholic Relief Services after graduating from UVM—have seen what cancer looks like for patients in these remote places, where treatment centers are often too far away, non-existent, or inadequate.

Together, they and their colleagues are building a network of the world’s best healthcare experts and remotely connecting them with doctors and practitioners in underserved regions who need assistance treating their cancer patients. Part mentorship program, part technology and medical innovation, and part professional association, ICEC seeks to spread and sustain cancer expertise around the world through person-to-person mentoring and advanced and affordable treatment equipment.

“There are a number of little groups doing this, but nobody does it anywhere near the order of magnitude that it needs to be done,” Coleman says. Having once attempted to open a cancer center himself in Kathmandu, Nepal, he understands why some NGO-led clinics and initiatives fail over time to address health issues in those areas—because more often than not, the aid to those communities either leaves or depletes.

Through ICEC’s structure, “the idea is you have those with resources help those without resources, those with resources combine expertise and work together rather than across purposes, and for those who need resources, you challenge them to become good enough so they can become the expert resource in their region. It’s trying to pull people together with the right intention and doing it with an infrastructure that can actually get the job done,” Coleman explains.

Since its launch in 2014, ICEC has helped doctors abroad and in the United States. ICEC is currently collaborating with doctors and programs in South Dakota to address cancer treatment disparities and provide culturally competent care to Native Americans on reservations.

“We constantly use and talk about Mandela’s quote, ‘It always seems impossible until it’s done,’” Roth says. As the less medically inclined of the two—and having sustained a friendship, built on their bond as Alpha Epsilon Pi brothers, and now a professional partnership with Coleman over the decades—Roth jokes that his role at ICEC is to “raise my hand at meetings when I no longer understand what the world-class doctors are talking about.” It’s a balancing act of skillsets that seems to be working for the UVM buddy team. “I get to be around some fairly intense and most amazing people on the planet. As long as they keep telling me where the meetings are, I’ll show up,” Roth says.

Pauline Dolan ’89 didn’t sleep a wink the night after she admitted the first cohort of students to her all-girls school in Tanzania, Secondary Education for Girl’s Advancement (SEGA). “I knew I was making a huge commitment to these girls saying that, for the next five years, they could get an education with us,” she says.

Having lived and worked in Tanzania for ten years prior to that sleepless night, Dolan saw how important education is to underprivileged girls there. Most Tanzanian girls from impoverished families drop out once they reach their pre-teen years “because they have no way of being in school; because they don’t have the means; because it’s such a patriarchal society; because there are so many hurdles,” she explains.

Dolan met girls who had exchanged sex for education or for places to sleep and live. She met girls who didn’t know about consent or that “they could even say ‘no’” to the rampant sexual exploitation, assault, and rape they encounter. “They had this real idea that school would change their lives. They would do anything to get an education, but society was not set up to help poor girls.”

Though, during those anxious opening days, Dolan actually lacked the funds or resources to keep SEGA open for a full five years, she hoped she could raise the rest of the necessary support to keep it going if only she got started. With no physical campus or schoolhouse, Dolan convinced a primary school to let her borrow a classroom until she could build out a proper campus for SEGA.

In the eleven years since Dolan admitted her first cohort, SEGA’s enrollment has grown from thirty students to more than 270, 90 percent of whom receive full scholarships. The school now sits on a beautiful, sprawling campus in Morogoro, Tanzania, and boasts dormitories, solar panels, faculty housing, a poultry farm, water cisterns, and ample classrooms. In addition to educating as many deserving girls as possible, SEGA offers a scholarship program to help students continue their education upon graduation and a robust mentorship program that connects alumnae to at-risk girls in their communities.

“The whole idea of the school was to provide a safe environment; material, counseling, and emotional support; personal development; and all the skills that these girls need to survive out there in the world once they get out of school,” Dolan says. “By the time a girl leaves SEGA, she has a whole host of skills—especially around entrepreneurship and business development—she knows her place in the world and her rights; she knows about leadership, how to interact with others, all of those kinds of things.”

A NEW RX FOR ADDICTION

In the wake of her brother’s tragedy, Rhodes sought solace and understanding through advocacy groups in her Steamboat Springs, Colorado, community—a small, yet active ski town that reminds her of Burlington. What she found instead were scare tactics to “keep kids off drugs” and preconceived notions—her own included—that the only individuals at risk of opioid addiction were uneducated, unmotivated, or from broken homes or low-income families.

“I couldn’t figure out why there was this perception because that wasn’t the way I was raised and that wasn’t the background I came from,” she says. Rhodes and her brother grew up in Massachusetts; attended private school and college; and were raised by two college-educated, well-respected parents who took them skiing on the weekends at their family cabin in Vermont.

One of the things she was taken aback by in her search for an advocacy group was the fact that “they weren’t talking to kids about legitimate prescription use,” she says. “We have a very active, sports-oriented community up here, and there are very high levels of opioid prescriptions in places where athletes, or anyone, gets injured.”

Seeing the threat her community faced, Rhodes got to work educating students, doctors, parents, and patients about pain management options and the relationship between addiction and behavioral and mental health disorders. It’s work that meshes naturally with her “day job” as health and wellness director at the Health Partnership Serving Northwest Colorado. “What we found was that people really grabbed on to the message that it doesn’t matter where you came from. It doesn’t matter what your background is or who your parents were. Addiction really doesn’t discriminate,” she says.

For Rhodes, sharing her family’s story is still difficult today, but knowing it may help prevent other sisters from losing their brothers is bittersweet. “It’s a terrible story and it doesn’t end well, but it can happen to anybody. And if you have some of that information, then you can make different decisions for yourself.”