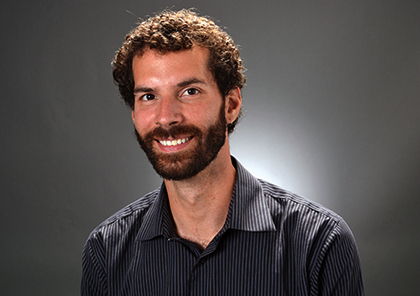 Nicholas Farina, Ph.D., a post-doctoral associate in the University of Vermont Department of Biochemistry and member of the Vermont Cancer Center, has been awarded a United States Department of Defense grant in support of his research to identify novel biomarkers in the blood to more effectively diagnose the most aggressive forms of prostate cancer. The major aim of the study is to identify microRNAs that promote prostate cancer metastasis to bone.

Farina was one of 22 investigators out of an international field of 104 to be awarded a 2014 Post-Doctoral Training Award by the Prostate Cancer Research Program at the CDMRP. The two-year, $115,000 award recognizes Farina as one of the “next generation of prostate cancer investigators” as presented by the PCRP in its program announcement.

Specifically, Farina is investigating a stable class of RNA molecules – called microRNAs – which have been found to correlate with cancer progression, as well as been detected in blood samples of men with advanced prostate cancer. He hopes to define a signature of these microRNAs that relates to metastasis to bone and can be detected in the blood at an early stage.

The Prostate Cancer Research Program (PCRP), one of many Congressionally Directed Medical Research Programs (CDMRP) through the Department of Defense, prioritizes research that will: advance early detection of prostate cancer, distinguish aggressive from non-aggressive forms of the disease in men who are newly diagnosed, develop effective treatments and address issues of resistance for men with high risk or who have metastatic prostate cancer; and develop strategies to “optimize the physical and mental health of men with prostate cancer.” Farina’s research project aims to address each of the PCRP priority areas.

Blood tests could determine the nature of the cancer as well, providing insights into targeted treatments and more effective care for patients with aggressive prostate cancer.  For men who are post-treatment or post-hormone therapy discovery of signature microRNAs of this nature will mean better surveillance for disease recurrence.  Farina and his team will be able to begin screening human patients to test the true predictive value of these microRNAs and can initiate a clinical study using current FDA approved drugs to target treatment or patients based on findings from his research.