The Dow Jones of Happiness 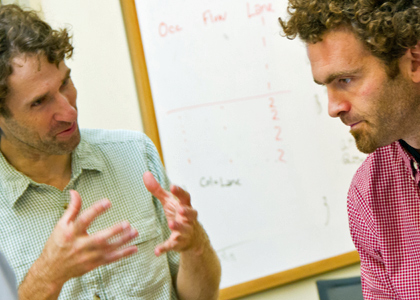 Yes you can — we’ve built a tool to do the job, say Peter Dodds and Chris Danforth.

These UVM scientists, working with others from the MITRE Corporation, have been gaining international attention over the last few years for the creation of what they’re calling a hedonometer. It’s a happiness sensor — and it made the front page of the Wall Street Journal. Check it out at www.hedonometer.org.

Now findings from their research are updated every 24 hours (soon to be every hour, and, eventually, every minute) — and are available to the public for free.

On the hedonometer’s front page, a wavering graph rises and falls like a ticker at the New York Stock Exchange. Except, instead of averaging the value of thousands of companies, the hedonometer compiles and averages the emotional state of tens of millions of people.

“What it’s doing right now is measuring Twitter, checking the happiness of tweets in English,” says Chris Danforth, a mathematician who co-led the creation of the site with the director of UVM’s Complex Systems Center, Peter Dodds.

But soon the hedonometer will be drawing in other data streams, like Google Trends, the New York Times, blogs, CNN transcripts, and text captured by the link-shortening service Bitly. And it will be data-mining in twelve languages.

The research team made headlines — including Time Magazine and The Atlantic — when they reported on the happiest and saddest cities in America: Napa, Calif., at the top and Beaumont, Texas, at the bottom. In future versions of the hedonometer, the researchers plan to make this kind of geographically linked data available, allowing as-it-happens observation of how a happiness signal varies, say, between Seattle and San Diego.

“Reporters, policymakers, academics — anyone — can come to the site,” says Danforth, “and see population-level responses to major events.” Like the Boston Marathon bombings, the saddest day measured by the scientists in nearly five years of observations.

The hedonometer draws on what scientists call the “psychological valence” of about 10,000 words. Paid volunteers, using Amazon’s Mechanical Turk service, rated these words for their “emotional temperature,” says Dodds.

Using these scores, the team collects some fifty million tweets from around the world each day — “then we basically toss all the words into a huge bucket,” says Dodds — and calculate the bucket’s average happiness score. As the site develops, the scientists anticipate that it will be gathering billions of words and sentences daily.

"Our method is only reasonable for large-scale texts, like what's available on the Web," Dodds says. "Any word or expression can be used in different ways. There's too much variability in individual expression" to use this approach to understand small groups or small samples. For example, “sick” may mean something radically different to a 14-year-old skateboarder than it does to his pediatrician.

But that's the beauty of big data. Each word is like an atom in the air when you’re trying to figure out the temperature. It’s the aggregate effect that registers, and no individual tweet or word makes much difference. In the Boston Marathon bombings example, positively scored words like “prayers” and “families” spiked along with “explosion,” “victims,” and “kill” but, obviously, not for positive reasons.

“If we remove ‘prayers,’ ‘love,’ and ‘families,’” says Chris Danforth, “it’s not going to change the day’s overall deviation from the background, because of all the other words.”

Changing which words are used to assess the overall emotional picture, “is like changing the filter on a lens you’re using,” explains Peter Dodds. “You can take out all the color, or you can turn up the contrast, but you can still see the picture.”

The verdict of consciousness

In 1881, a little-known book, Mathematical Psychics, published by Francis Edgeworth, asked the reader to “imagine an ideally perfect instrument, a psychophysical machine, continually registering the height of pleasure experienced by an individual, exactly according to the verdict of consciousness.”

In other words, a hedonometer. While Edgeworth’s was a thought experiment, Dodds and Danforth’s hedonometer is a real device. As such, it's not quite "ideally perfect." They’re working now to expand beyond the “atoms” of single words to explore the “molecules” of two-word expressions. But the hedonometer does work.

“The key piece is not whether we’re correctly measuring atoms and molecules,” says Brian Tivnan, a researcher from MITRE. “It’s the relative context that is so important, which is why the sudden drop from the Boston Marathon bombings jumps out at you. The hedonometer shows the pulse of a society.”

Of course, happiness isn’t simple. Plato, Buddha, Freud and Tina Turner all pondered its meaning. Many Americans rank happiness as what they want most in life, but what is it, really?

“We’re not trying to tell you that contentment is better than happiness — we’re not trying to define the word,” says Danforth. The Nasdaq Index doesn’t capture the whole stock market. Gross Domestic Product doesn’t define the meaning of the economy. An EKG doesn’t tell a doctor everything about your heart. But all these aggregate measures of something remote are widely studied. The hedonometer may prove to be the same.

“We’re just saying we’re measuring something important and interesting,” says Chris Danforth. “And, now, sharing it with the world.” 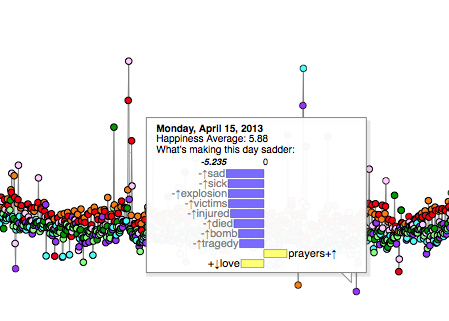