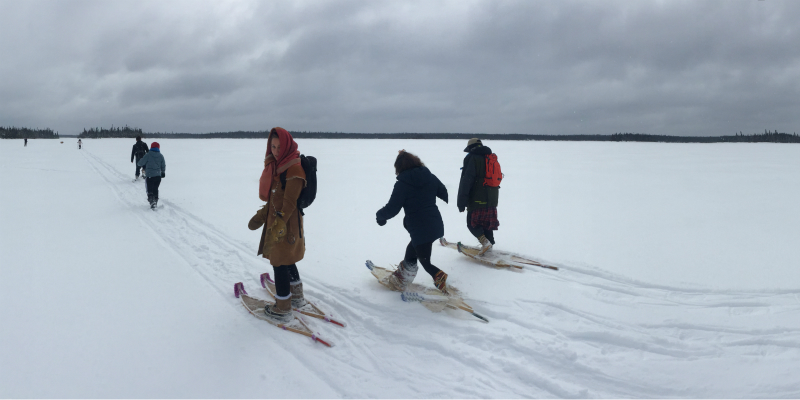 Students on their way to inspect a Cree fish trap on Scott Lake in Quebec.

The ten students in the course needed the warm clothing for their trip to the boreal forest in Quebec March 25-April 2. The excursion is a highlight of “Cree Country: Native History and Environmental Change," a graduate level seminar which is also open to undergraduates.

The course attracts students from the College of Arts and Sciences, the Rubenstein School of Environment and Natural Resources, and the College of Agriculture and Life Sciences, reflecting the university’s efforts to create rich educational experiences that cross disciplinary boundaries. Students witnessed first-hand the societal and environmental fallout caused by the voracious industrial appetite for natural resources.

Window to the Past

“Cree Country” is not identified on a map—it is a general term for a territory roughly the size of New England and New York State combined, lying on the eastern side of James Bay. The southern reaches of Cree Country are just a day’s drive (about 12 hours by car) from Burlington.

“Professor Massell compares it to a window into history,” said Chris Demairo. “This is a place where competing interests of native sovereignty and modern development are still playing out.”

The trip included conversations with Cree tribal leaders and policy makers, a visit to the largest sawmill in Quebec, and a four-day foray into the “bush.” Here the students learned first-hand from the Cree about a culture that is fast changing. They learned to prepare moose hides for tanning, set underwater nets for fish, and pluck ptarmigans, a native grouse, for the cooking pot.

“In many parts of the continent, Native culture has long since passed from tradition into folklore,” Massell explains. “The Cree in this region are still using skills they’ve practiced for thousands of years to make a living. In the southernmost communities where we visited—those most exposed to modern industrial civilization—one-third of community members still make a living from hunting and trapping. In the more remote regions to the north, that fraction is even higher.”

One inhabitant the students met was Paul Dixon, a native Cree who buys furs from local trappers and sells them to the fur industry. Massell says many children in Dixon’s generation were separated from their families and removed to church-run residential schools, sometimes hundreds of miles from their home communities. These disruptions had traumatic consequences for the Cree and contributed to the breakdown of their traditional tribal culture.

Dixon handed out fox, marten and lynx pelts for students to touch. “We read about the centuries-old fur trade,” said Massell. “Examining how it survives brings this history up to the moment.”

In the village of Waswanipi, the class met Allan Saganash, a local official who negotiates with lumber companies and the Province of Quebec to protect Cree fur trapping interests. He presented the students with elaborate Cree maps of the forest–place names were augmented with details that only a trapper, intimately connected with the land, could know about.

“The maps identify 200 different sites where you could find moose, or walleyes, or blueberry patches,” said graduate student Svenja Telle. “It illustrated the special knowledge the Cree have, the intimate connection they have to the land.”

Quebec moved to harness the abundant hydroelectric and timber resources in Cree country during the 1970s. The Quebec Association of Indians sued the government and, after much legal wrangling, the two parties signed the James Bay and Northern Quebec Agreement. In concept, the treaty allows the Cree to coexist with regulated development in the James Bay region.

Students witnessed this modern industrial face of the province through a visit to a sawmill that converts native black spruce to lumber for international markets.

“It’s the policy of the sawmill to replant the trees they cut, but it assumes you can recreate this complex ecosystem that’s developed over thousands of years. This is the Subarctic region where trees grow very slowly,” Charles Koskinen said.

Another student, Jonathan Tollefson, noted that about 80% of the lumber processed there is shipped to Lowe's or Home Depot in the U.S. “We’re not just innocent bystanders—by implication we’re connected to what’s happening there,” he said.

During four days “in the bush,” the group learned the fine art of staying warm in the early spring of Quebec while immersing themselves in Cree culture during a visit with Anna and David Bosum outside the tiny village of Oujé-Bougoumou.

“Now in their 70’s, they are of the last generation of Cree to grow up in the bush,” said Massell, “with a set of skills that are just dazzling—like setting a beaver trap under two feet of ice. They have much to teach us.”

The Bosums may represent the last stand of Cree traditions by preserving this vanishing way of life through cultural tourism. The website of their business, Nuuchimi Wiinuu Cultural Tours, reads in part: “Living close to this land, we tend to think of it as a living entity—something that can be hurt if we don’t treat it well. So we take what we need from it and leave the rest to grow and flourish for our grandchildren.” 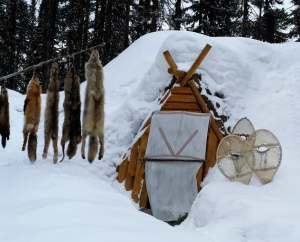 Traditional Cree lodge of wood planks and moss, built by David Bosum, covered in snow, with pelts of marten, fox, lynx and wolf drying. The students said the Cree-made snowshoes were far superior to recreational versions they've used in the U.S. 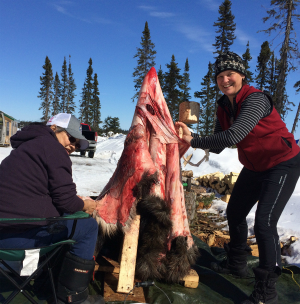