Crisis in the Temple 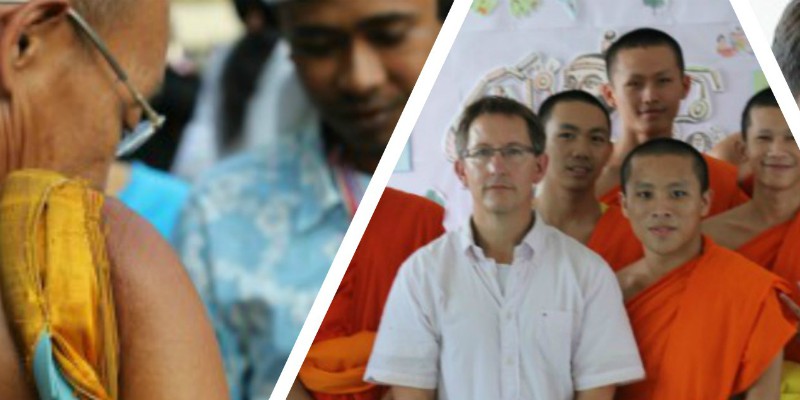 When a military coup broke out in Thailand recently, kevikkkkthought his research was over. The religious studies professor was in Bangkok to study Thailand’s revered Buddhistmonks during months of escalating political protests. But when martial law fell, his field work quickly took a back seat while he focused on his family’s safety.

“It was a tense period,” says Borchert, who holed up with hiswife and three children in a Bangkok apartment. “Even the smallest protests were met with overwhelming force by police and soldiers,” hesays. Civilians who broke curfew were arrested, and Facebook was even shut down briefly.

Once Westerners were deemed safe, the Fulbright Scholar cautiously restarted his project. The opportunity to explore the political attitudes of Thailand’s monks during such a politically charged moment was too promising to pass up. One of Borchert’s chief goals was to determine how monks, as de facto community leaders, navigate civic life without the right to vote in elections. “It’s a fascinating question, because Buddhist monks are absolutely central to Thai society,” he says. More than 90 percent of the country is Buddhist and thousands of young men become ordained monks annually, he says.

“But despite this elevated status, many monks increasingly find their inability to participate directly in the democratic process to be awkward and restrictive,” says Borchert, who conducted more than three hundred hours of in-depth interviews, surveys, and observational research over six months in Thailand.

Borchert found deep political divisions among the monks. Many said they would welcome the ability to vote, characterizing politics as inseparable from their role as community leaders. But others were sharply critical ofovertly political colleagues, wishing to remain apolitical in public, and to advance their views through private channels. Borchert’s Thailand project is part of a larger study on monastic politics in Southeast Asia and China. He cites Tibet and Burma ascautionary tales for how religious and secular conflicts can escalate into violence.

“In Tibet, monks have reacted to Chinese control and development with extreme protests, including self-immolation,” he says. “And Burmese monks, despite their contributions to democracy, have targeted Muslim minorities in dangerous, nationalistic ways.”

Thankfully, Thailand’s religious tensions have yet to reach that point. But by understanding these potential flashpoints, Borchert aims to help prevent future conflict and strengthen democratic processes and participation in a country that has experienced twelve military coups since 1932.

He hopes his field work in Thailand—which borrows techniques from sociology, political science, history, and anthropology—helps to modernize people’s understanding of religious studies. For Borchert, the decision to enter the humanities during his undergraduate days was a no-brainer. “The majority of the planet’s population believes in some form of religion, and that makes religious studies absolutely critical, particularly given the potential for sectarian violence.”

Basil Waugh
“The majority of the planet’s population believes in some form of religion, and that makes religious studies absolutely critical, particularly given the potential for sectarian violence.” - Professor Thomas Borchert