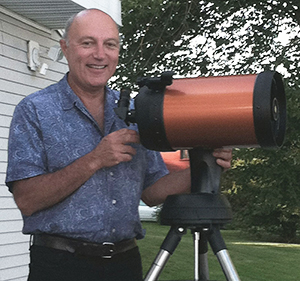 George Osol, PhD, is a Professor of Obstetrics and Gynecology, Pharmacology, and Molecular Physiology and Biophysics in the College of Medicine. He received a PhD in Animal Sciences from the University of Vermont in 1981 and is a CALS Distinguished Alumnus (2002), University Scholar (2010) and a Distinguished Investigator of the Cardiovascular Research Institute, CVRI (2014). George's interests include astronomy, music, photography and writing.

Many of the choices we make in life seem spontaneous in the moment, but then appear almost preordained when viewed within the broader context of one's life. Going to graduate school at UVM was like that for me as, in retrospect, it was a time when things fell into place both personally and professionally.

Having grown up in the New York City metropolitan area, escaping the city was foremost in my mind by senior year of college. My family had vacationed in Vermont for years, so heading north was appealing -- new, yet familiar -- and I applied for graduate school at UVM in the fall of 1974.

One spring evening, I received a phone call from Al Smith, who was then Chair of Animal Sciences. He told me that I had been accepted into the PhD program, and that the position included a $3,000 teaching assistant stipend! In those days, it was enough to live off of if one lived modestly. Hanging up, I felt like clicking my heels because the next chapter of my life, which had been uncertain up to that point, was instantly resolved.

Although the Department of Animal Sciences was based on the main campus in Carrigan Hall, which was demolished in 2006 to make way for the Davis Center, I ended up at the Bioresearch Lab on Spear Street, which was (and is) across from the UVM Farm. There were only three faculty out there, along with some graduate students and staff. Dr. Donald Foss (my thesis advisor), Dr. Lyndon Carew (a nutritionist and a close friend ever since), and Mr. Leonard Mercia, a poultry extension specialist.

Len had written a fairly successful book called Raising Poultry the Modern Way, which is still available on Amazon some forty years hence. Don later became an Associate Dean of the College of Agriculture and Life Sciences (CALS), while Lyn wrote a book of his own a few years ago called Musings of a Vermont Nutritionist. Don and Lyn both recently retired. I saw Len a few months ago and he is not only well, but still hitting the slopes at the age of 93. God Bless!

Bioresearch was actually a poultry farm and my graduate research was on how different wavelengths of light are transduced by the avian brain into endocrine and metabolic events. Early on, Dr. Foss put me in the custody of Rosalie, his technician. She was a pretty brown-haired, brown-eyed girl who knew her radioimmunoassays and microsurgery. Everyone called her "Geoff" because her maiden name was Geoffrion (for hockey fans, Bernie "Boom Boom" Geoffrion, who played for the Canadiens, was her cousin).

Geoff's job was to teach me the research method, and we became friends and were married three years later. Our daughter Tanya was born in 1983 and is also a UVM alumnus.

The social environment at Bioresearch was lively, with volleyball at lunchtime and the occasional after-work barbecue featuring -- you guessed it -- chicken! Fran Kinghorn, who is still in the department as an internship coordinator, also started her career at Bioresearch at around the same time. 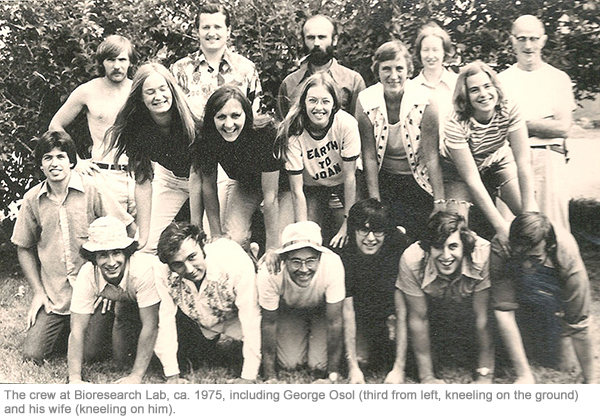 My thesis project involved constructing light boxes illuminated by different wavelengths of light to see whether the lighting regimen could improve either feed efficiency or reproductive maturation. From a commercial standpoint, when it comes to chickens, everything gets multiplied by a million since poultry farms normally house hundreds of thousands and often a million or more birds. If you could make a bird metabolically more efficient and have it gain just an extra two ounces without eating any more feed, this would translate into an extra 100,000 pounds of meat for a million bird flock, which means more money.

It turned out that red light accelerated reproductive maturation and was calming to the birds. Later, someone else discovered that it also makes for larger eggs, and a fellow called Randall Wise actually came up with red contact lenses for chickens to wear! Unfortunately, the idea didn't pan out because the birds started getting corneal infections. The research experience did open my eyes to the wonders of physiology and awoke a curiosity about how cells respond to environmental and physical cues -- themes that have stayed with me ever since.

Pursuing a New Field of Research

At the same time, agricultural research wasn't really my cup of tea and, after finishing the PhD in 1981, we moved to Boston so I could gain some clinical research experience as a postdoc in opthalmology at Tufts University. Two years later, we returned to Vermont and I began a second postdoc working in the Department of Physiology with Dr. William Halpern.

The project with Dr. Halpern involved designing a new method for studying small blood vessels under in vitro conditions. Geoff worked with us as well and, along with George Coy (an engineer at the UVM Instrumentation and Model Facility), we developed and validated the video-electronic system and published the first papers using it to define small artery myogenic behavior in 1983.

When Bill retired in 1990, he created a company called Living Systems Instrumentation (LSI) that built and sold the instruments we had developed. My wife was the vice president for many years and, after Bill died of pancreatic cancer in 2008, she managed the sale of the company to Dr. Gerry Herrera (another UVM alumnus), who is now its president. He moved the company from 156 Battery Street in Burlington to St. Albans in 2010, and LSI is now part of a larger, family-owned conglomerate called Med Associates.

In light of my background in reproductive research, I applied for a tenure-track position in the Department of Obstetrics and Gynecology and joined the College of Medicine faculty in 1988. My research since has been focused on women's health -- specifically, on vascular dysfunction in hypertensive pregnancy -- and it has been an honor and a privilege to be part of the UVM community for most of 40 years!