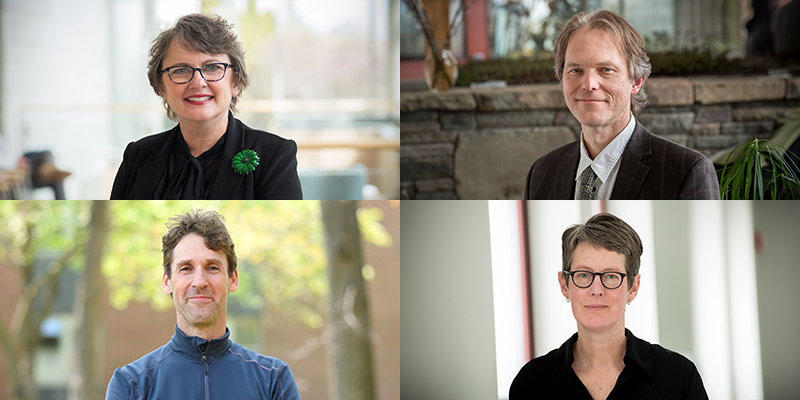 UVM values research and scholarship highly, and its faculty is continually engaged in the generation of important new knowledge. The University Scholar Awards program recognizes outstanding faculty each year for sustained excellence in research and scholarly pursuits.

Each year, up to two scholars in basic and applied science and scholars in the social sciences, humanities, and creative arts are chosen by a faculty panel. Here are the 2019-20 University Scholars, the 39th class of scholars in the history of the program. These four individuals were celebrated at the installation ceremony on Friday, May 3, 2019.

Dr. Cushman is an international leader and renowned expert on the epidemiology of cardiovascular and other diseases of aging with an emphasis on studying racial disparities. Her research has led to significant improvements in the clinical care of cardiovascular disease, stroke and venous thrombosis. Dr. Cushman studied at the University of Vermont (B.S.), the Larner College of Medicine at the University of Vermont (M.D.), and Harvard University (M.Sc.). She joined UVM in 1992 and is currently a Professor with appointments in the Departments of Medicine (Hematology/Oncology Division) and Pathology and Laboratory Medicine. She is Director of the Thrombosis and Hemostasis Program at the UVM Medical Center, Director of the Vermont Vascular Medicine Conference, and is on the board of directors for the Cardiovascular Research Institute at UVM, the North American Society of Thrombosis and Hemostasis, and the American Heart Association, Founders Affiliate. She also serves as Editor-in-Chief of the International Society on Thrombosis and Haemostasis journal Research and Practice in Thrombosis and Haemostasis and was recently awarded the Population Research Prize by the American Heart Association and named to a prestigious list of the world’s most influential researchers, compiled and published annually by Clarivate Analytics. Dr. Cushman’s publication and mentorship record is outstanding, and her written scientific output has been described as prolific and enormously impactful. She has published 534 peer-reviewed research articles and trained more than 50 Fellows and graduate and postdoctoral research scientists. She has been a driving force in support of the development of young investigators, and pioneered the "early career movement" of the American Heart Association.

Dr. Dodds is a world-class researcher in the field of Complex Systems whose work has made fundamental contributions to the field of Complex Networks, among others. Dr. Dodds received his B.S., B.E. and M.Sc. from the University of Melbourne, and his Ph.D. from Massachusetts Institute of Technology. He joined UVM in 2006 and is currently a Professor in the Department of Mathematics and Statistics, Director of the Vermont Complex Systems Center at UVM, and he co-runs the Computational Story Lab. Dr. Dodds’ research focuses on system-level, big data problems in many areas including language and stories, sociotechnical systems, Earth sciences, biology, and ecology. Dr. Dodds has an exemplary publication record, and has co-authored 74 papers, which have 11,205 collective citations, and 22 of his publications have been cited at least 100 times, demonstrating the consistent quality and diversity of his work. His work has been highlighted repeatedly by national and international media outlets, including the New York Times and the BBC. Dr. Dodds has also been recognized as a passionate and dedicated educator, and he created and oversees the M.S. and Ph.D. degrees in Complex Systems and Data Science. In his role at the Computational Story Lab, he co-directs a research group of 15 to 20 students ranging from undergraduates to post-doctoral scholars, and he pioneered the practice of self-recording lectures at UVM using new technology to make his lectures available online.

Dr. Ivakhiv is a preeminent scholar working at the interface of humanities and the environment and has an international reputation as a leader in this field. Dr. Ivakhiv received his B.F.A, M.E.S, and Ph.D. from York University. He joined UVM in 2003, and is now a Professor of Environmental Thought and Culture with a joint appointment in the Environmental Program and the Rubenstein School, where he is the Steven Rubenstein Professor of Environment and Natural Resources. He is also a Faculty Fellow in the Gund Institute for Environment and recipient of a Gund Institute Catalyst Award. His research and teaching are focused at the intersections of ecology, culture, identity, religion, media, and the creative arts. He is the author of Claiming Sacred Ground: Pilgrims and Politics at Glastonbury and Sedona (2001), Ecologies of the Moving Image: Cinema, Affect, Nature (2013), Shadowing the Anthropocene: Eco-Realism for Turbulent Times (2018), Executive Editor of The Encyclopedia of Religion and Nature (2005), Founding Editor of Media+Environment journal, former President of the Environmental Studies Association of Canada, and on the editorial boards of several journals and book series in the environmental humanities. Dr. Ivakhiv has played a key role in bridging disciplines at UVM by organizing several groups of interdisciplinary environmental scholars including the Lattie Coor Environmental Humanities Fellows, the EcoCultureLab, and the symposium-festival "Feverish World, 2018-2068: Arts and Sciences of Collective Survival." He is a renowned teacher who has mentored more than 75 undergraduate and graduate student theses in the arts, humanities, and social sciences.

Dr. Rohy is a leading scholar of gender and sexuality in American literature and culture. She teaches and writes about the intersections of nineteenth- and twentieth-century American literature, queer theory, feminist theory, and psychoanalytic theory. She studied at Rice University (B.A.) and Tufts University (Ph.D.), and taught at Bowling Green State University in Ohio before arriving at UVM in 2002. She has published essays on James Weldon Johnson, Ernest Hemingway, María Cristina Mena, H.D., Edgar Allan Poe, James Baldwin, Alison Bechdel, Walt Whitman, and Pauline Hopkins. Dr. Rohy has written three highly praised books: Lost Causes: Narrative, Etiology, and Queer Theory (New York: Oxford University Press, 2015), Anachronism and Its Others: Sexuality, Race, Temporality (Albany, NY: SUNY Press, 2009), and Impossible Women: Lesbian Figures and American Literature (Ithaca, NY: Cornell University Press, 2000). She is also the co-editor, with Elizabeth Ammons, of American Local Color Writing, 1880-1920 (New York: Penguin, 1998). She just completed a fourth monograph about how ideas of chance and contingency offer new ways to understand queerness and heteronormativity. Titled Chances Are: Contingency, Queer Theory, and American Literature, it will be published by Routledge this August. She has won numerous teaching and leadership awards at UVM including the Kroepsch-Maurice Excellence in Teaching Award, and has a reputation as a dedicated mentor, producing collaborative work with junior colleagues and empowering students.