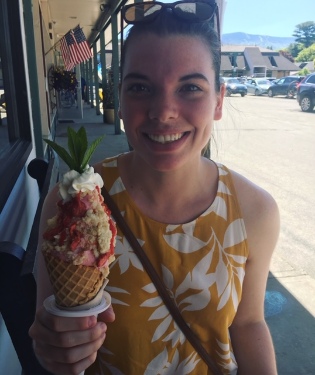 The University of Vermont Graduate College is pleased to announce that the recipient of the 2019-2020 Rodney L. Parsons Anatomy and Neurobiology Award is Katharine Beca, a doctoral student in the Neuroscience Graduate Program.

Katharine was born and raised in Chazy, a small town right across Lake Champlain in New York State.  Prior to attending UVM, she received her Bachelor of Science degree in chemistry from St. Michael's College, a small liberal arts college in Colchester, VT. There, she had her first experience with scientific research studying inorganic chemistry and mixed metal oxide catalysis. Upon taking several psychology and biology classes at St. Mike’s, in addition to a summer internship at Columbia University in a PET research lab, she became excited at the prospect of studying neuroscience more deeply. Since she loved Vermont so much, she jumped right into the Neuroscience Graduate Program at UVM.

Now, as a Ph.D. student, she keeps busy as a member of Margaret Vizzard's Lab studying the neural control of the bladder using rodent models of bladder inflammation as well as chronic stress. She is also concurrently pursuing a Certificate of Graduate Study in Healthcare Management and Policy within the Public Health department at UVM. In the future, she hopes to use her Ph.D. to teach within academia and/or venture out of academia into the public or private sector to combine her knowledge of science and policy to be an advocate for issues faced by scientists. In the meantime, you can probably find her playing with her dog, driving long distances for large ice cream cones, or spending time with her family.

Dr. Rodney L. Parsons joined UVM as Assistant Professor of Physiology in 1967. In 1979, he became chair of the then Department of Anatomy and re-purposed it to establish one of the first Anatomy and Neurobiology departments in the country. He was the founding and only chair of that department, which merged with the Department of Neurology in 2012 to become the Department of Neurological Sciences, integrating basic and clinical science under one department. The goal of the Parsons Award is to support outstanding graduate students who demonstrate excellence in both neuroscience research and teaching in any broadly defined anatomical science, the disciplines which Dr. Parsons played a key role in the growth and evolution of at UVM.