Richard Wallace has devoted his academic career to studying the role of interdisciplinary thinking in environmental studies. His writing looks at the integration of disciplinary approaches, problem solving methods, and social values in addressing complex environmental problems.

“One of the great fallacies in modern society is that we have an ability to separate who we are and how we feel from the work that we do. It isn’t true! Many great conservation successes—and failures—have been influenced by the values that people hold," he says. "In my work I explore the values that influence people’s behavior, such as the desire to obtain or limit power, respect, knowledge, skill, well being, or wealth. These sorts of influences can have a profound effect on conservation outcomes.”

Rich was strongly influenced by Professor Leslie King, who often invited student TAs out to her house in North Hero for conversations late into the evening. “The faculty-student mentoring relationships had a strong focus on developing learning skills that was enormously influential,” he says, adding that working closely with other students added to the rich learning environment. “I loved the peer to peer engagement, particularly with the ENVS majors my senior yearwe were a very tight group.”

Rich's ENVS thesis was titled "Conservation of the Western North Atlantic Humpback Whale in the U.S. and Dominican Republic." He went on from UVM to complete an M.E.S. and Ph.D. at Yale University in Environmental Studies, with a focus on conservation governance and behavior. He was founding chair of Environmental Studies at Ursinus College, where he has taught since 2002. Richard lives in Collegeville, Pennsylvania with his wife Shannon Spencer and children Tucker and Noah. 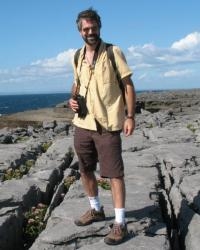