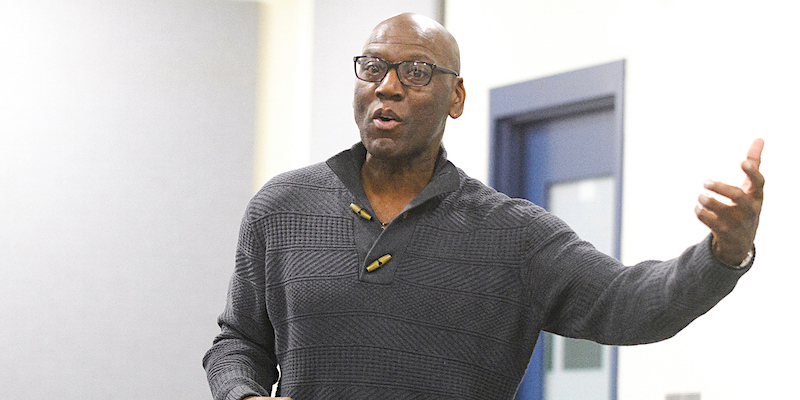 This famous quote by Frederick Douglass deeply resonates with Dr. Leon Walls, Associate Professor in the College of Education and Social Services at UVM. Douglass was an escaped slave who became a prominent activist, author, and public speaker. A leader in the abolitionist movement, Douglass’s words connect to the heart of Walls’ teaching and research.

“Frederick Douglas should be put alongside American icons such as George Washington and Thomas Jefferson. His words crystalized for me how important it is that we instill a strong foundation in the young. It can’t be done piecemeal later on,” Walls says. “Radical, foundational change can only happen at that level. We don’t teach someone to ride a bike when they’re 35.”

Walls wants to build that strong foundation early on by working to change the way educators teach science to children of color. His research points to a lack of focus on children of color both in the science classroom and as science education research participants. Existing studies in his field of research bear this out with a focus almost exclusively on white middle-class students, he says.

“When you’re looking at how a child understands science, first you need to look at the origins of how that child became introduced to science. What was their relationship to science and scientists?” he says. “As a result of the work conducted in my area of research, the nature of science (NOS), we know quite well what white preservice teacher candidates think about science, and we also know what white in-service teachers think. But unfortunately, the same cannot be said with respect to many science teachers of color and the students of color they teach.”

From Engineering to Teaching to Science Literacy

Walls started his career as an electrical engineer but felt unfulfilled. He went back to school to earn a master’s degree in education in the 1990s from Marquette University in Milwaukee, Wisconsin. He also taught middle school science there for nine years in the Milwaukee Public Schools district.

He left teaching in 2005 to enroll in a doctoral program in Geoenvironmental Science Education at Purdue University. It was there he engaged in nature of science learning and discussions for the first time. Using this research framework, he began exploring how very young children of color conceive of and understand the practice of science and the role of scientists. Research strongly suggests that possessing an accurate understanding of NOS is an important factor in determining whether students achieve science literacy.

In his widely referenced 2012 dissertation-based study, “Third Grade African American Students’ Views of the Nature of Science,” Walls worked with a sample of African American third grade children in an effort to make science equitable for all students. Conducted in two Midwest urban settings within the students' regular classrooms, Walls used three instruments: Views of Nature of Science Version E (an interview protocol developed for elementary students), a modified Draw a Scientist Test (a drawing activity supplemented by an explicating narrative), and Identify a Scientist (a simple select-a-photo technique supported by Likert-measured sureness). The study advocated for the use of such instruments for constant monitoring of student views to construct inquiry-based science lessons and increased research about students of color.

“Race is so central to the work I’m doing. In my opinion, if you are conducting education research of any kind in the U.S. and race isn’t part of it, then I’m not sure what you’re doing,” he says. “I’ve seen many reproductions of the same research in my field, and none of it was specific to dealing with and including children of color. We know our understanding of science is influenced by our prior experiences. In the U.S., those experiences are heavily impacted by race, producing drastically different science learning outcomes between majority White students and their students of color counterparts.”

In hopes of reversing inequity in science classrooms, he challenges the UVM students in his classes to think about the language and techniques they use to teach science and how to relate all children in discussions. As an example, he personally discourages the use of the word “minority.”

“As a person of color, I don’t know what it (“minority”) actually means because it translates no real information. It is interesting because when a White person uses that word, I’m always curious as to what image is conjured up in his or her mind? For a term that literally translates into ‘anyone not White’, it means nothing to me,” he says. “I try to emphasize to my students that the words they use are indicative of the way they think. I really force them to take note of how they speak and think.”

Encouraging Effort Rather Than Perfectionism

Sandra King, an Early Childhood Education major in UVM's Accelerated Master Program in Special Education, works at the Trinity Children’s Center as a support staff member. As a first-year student, she felt an immediate connection to Walls in his Science of Sustainability course.

“I was shocked to see him the first day of classes because he is a person of color and so am I. I have never in all my years of schooling had a teacher that was black,” she says. “I learned from Dr. Walls that the most important part of learning is the understanding and effort. He never looked for perfection, he just wanted us to actually participate in his course and understand this important material. He really just wanted us to truly learn.”

Walls learns from his students as well. He teaches a Race and Racism in the U.S. course, where undergraduate students are required to keep a journal. Not only does he get to know students from their journal entries, but he also learns more about the pervasiveness of racism.

It was in one of his Race and Racism courses that Walls learned one of many powerful lessons about humility. “Trying to prove a point about discrimination, I tell my students that even with all of the college degrees I have, I can still be locked out of job interview simply because of how I look. But a white guy with a third-grade education, a shave, and a borrowed suit, can at least get in the door with no problem and have a seat,” he says.

“While reading the journals one student wrote about how she understands and experiences the same thing. Well, I know this girl, and she’s blond and blue-eyed. How can she know what it’s like to be discriminated against? As I read further it turns out that she is Jewish. A light bulb went off for me at that moment. There are assumptions that even I found myself making about my own students—the exact ones that I’m trying to get them not to make about others. It broadened my understanding of how pernicious racism works and that discrimination can come in many disguises.”

This experience brought Walls back to the wisdom of Douglass’ prophetic words. “Children are indeed the key. If we teach them the right lessons like how to love, depend on, and value each other, there will come a day when there will be no more broken men to repair.’”

Erica Houskeeper
“When you’re looking at how a child understands science, first you need to look at the origins of how that child became introduced to science."