Over 250 research-active faculty in the College of Arts and Sciences--discovering and exploring every day. Though it's impossible to list all of that exciting work, we can share some current highlights.

SOME OF OUR EXPERTS – YOUR PROFESSORS: 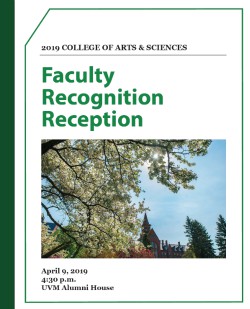 Faculty in the College of Arts and Sciences are expert teachers--they are also experts in their fields of study. Check out some of the recent academic accomplishments of CAS faculty in this publication.

How do I get involved with research?

Just Ask! 40% of UVM undergraduates do research with a faculty mentor.

Show up. Ask questions. Get to know potential faculty research mentors. These students did ...

Veromessor pergandei, that, unusually, forms three kinds of colonies: single-queen colonies, colonies with multiple queens, and colonies that temporarily are home to multiple queens but then aggressively compete until a single queen remains. And her work, which involved genetically testing more than 1,000 ants, helped contribute to and expand on the growing evidence that this hypothesis is correct. “The solitary males did mate with more queens than the queens that formed groups, which is what I expected to see,” she says.

Goldwater Scholarships are the premier undergraduate award in the fields of mathematics, the natural sciences, and engineering. Anna was chosen from a competitive field of 1,206 applicants from universities all over the U.S.  Anna came to UVM in the fall of 2012 planning to major in nutrition, which was in line with her background as a professional ballet dancer. However, she discovered her love for chemistry during her first semester on campus and jumped into the field, winning many accolades for her work, including the Beckman Scholarship, which funds two summers and one academic year of in-depth research. After graduation, Anna expects to earn a doctorate in analytical chemistry in her quest to become a professor. She hopes to teach the next generation of scientists while conducting research in analytical chemistry with environmental and health applications.

Adam used his love of snowboarding, his passion for drawing, and a flair for entrepreneurship to create Powe.Snowboards, an eco-friendly snowboard company based in Burlington.  Adam partnered with two environmental studies majors in the Rubenstein School of Environment and Natural Resources, and the students envisioned snowboards that would be ecological and environmentally conscious as well as super light, durable, and as earth-friendly as possible. They found a custom builder in Wisconsin who would manufacture the boards from hemp, bamboo, poplar, and bio-resin epoxy to get away from plastics and carbon fiber materials. Adam then created one-of-a-kind, limited-run art designs for the snowboards. By using renewable and sustainable materials, the response from Burlington, VT to Vail, CO and beyond has proven that Adam’s business idea, along with his passion for artwork, has come to fruition on the slopes of Vermont.

Alia was selected to be in the “Dean’s Signature” Integrated Social Sciences Program (ISSP), one of the four teacher-advisor programs for first-year students in the College of Arts and Sciences. ISSP explores the social problems that shape the modern world from an interdisciplinary perspective.  Her service-mindedness has followed her to UVM where she volunteers with FeelGood, whose proceeds from grilled cheese sales in the Davis Center are donated to help end world hunger. She's also working as a program assistant in the Community-University Partnerships and Service-Learning (CUPS) office on campus, whose mission is to align service opportunities with academic pursuits.

Through Hoffacker's internship in UVM’s Office of Sustainability, she organized the first annual Student Advocacy and Leadership Summit, a forum for campus leaders from environmental, social justice, professional development, and residential learning groups. Last year she was awarded the Udall Scholarship, a prestigious, nationally competitive award for sophomores and juniors who are committed to careers related to environmental or Native American issues. Since 2011, Sophia has been active in the Sierra Student Coalition, a national network of high school and college students working to protect the environment. Sophia, who is from the D.C. area, would like to commit her career and future to educating others about the threat of climate change.