A dedicated classroom teacher, Professor McKenna has received the University's highest award for teaching: the Kroepsch-Maurice Award for Excellence in Teaching. In addition to courses at the beginning, intermediate and advanced levels of Russian language, Professor McKenna teaches survey courses of 19th-20th century Russian literature, as well as individual-author courses on Gogol, Dostoevsky, Tolstoy, Chekhow, Nabokov, Pasternak, Bulgakov, and Solzhenitsyn. He has developed a Business Russian course in the Department of German and Russian and has team-taught another course in the School of Business Administration: The Culture of Doing Business in Russia. In addition he teaches the popular course, Mafia and Capitalism: Doing Business in Today's Russia. He has given lectures throughout Russia and the Soviet Union over the past twenty years for the Smithsonian Institution on topics of Russian culture, politics, and literature.

Consistent with his advising and mentoring of Russian majors, Professor McKenna has worked tirelessly in assisting students to locate jobs in Russia upon their graduation from UVM. He recently has been named a consultant for a major U.S. Department of Education (2009-2013) grant to prepare American students of Arabic, Chinese and Russian for studies in these languages at the university level in their target countries. Professor McKenna has also received grants from the National Endowment for the Humanities and the U.S. Information Agency for his various research specialties. From 1989-2007 he served as Director of UVM's Area and International Studies Program.

Professor McKenna is a Professor of Russian Language, Literature, and Culture in the Department of German and Russian. He earned his Ph.D. from the University of Colorado with a defense of his doctoral dissertation on the topic of Catherine the Great as a writer of fiction. He has continued to write on Catherine as well as other 19th-century women writers in Russia, and also conducts teaching and research on the topic of Russian satire. His most recent book, All the Views fit to Print: Changing Images of the U.S. in 'Pravda' Political Cartoons, 1917-1991, comprises a content analysis of 'Pravda's' editorial caricatures and provides a lively study of the newspaper's agitational and propaganda missions to define and reflect the "American way of life" for Russian readers during the Soviet era. Professor McKenna also conducts research in the area of Russian lexicology and paremiology (proverbs). His interest in the latter area is reflected in a volume he edited, Proverbs in Russian Literature: From Catherine the Great to Alexander Solzhenitsyn. He is also co-author of an advanced-level textbook, Reading Russian Newspapers. Currently, Professor McKenna is writing a book, The Role of Russian Proverbs in Alexander Solzhenitsyn's Fiction. 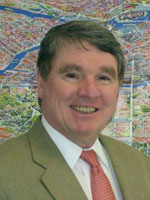