Kathleen Scollins is a native of Burlington, Vermont. She began teaching Russian at UVM in 2010, having received her undergraduate degree in Russian at Haverford College, followed by a Ph.D. in Slavic Languages and Literatures (with a minor in Secondary Language Acquisition) at the University of Wisconsin, Madison, in 2009. She previously taught elementary Russian at the Middlebury College Summer Language Program. At UVM, she teaches at all levels of Russian language, as well as numerous courses in Russian and Soviet literature and culture. Recent literature courses include “The Soviet Experience,” an experience-based exploration of the cultural artifacts of the Soviet Union  and “Petersburg: A Tale of One City,” a communal engagement with the textual and physical spaces of Russia’s cultural capital city .

Prof. Scollins’s book, Acts of Logos in Pushkin and Gogol: Petersburg Texts and Subtexts (Academic Studies Press, 2017), reexamines five foundational works of the Petersburg literary tradition alongside new “subtexts,” such as the biblical Book of Job (paired with Pushkin’s narrative poem The Bronze Horseman) and Peter the Great’s alphabet reforms (paired with Gogol’s “The Overcoat”). These new interpretations highlight the animating function of language in the city’s literature, from its mythic origins—in which the tsar Peter appears as a God-like creator, calling his city forth from nothing—to the earliest texts of its literary tradition, when poets took up the pen to commit their own acts of verbal creation. Scollins’s more recent research focuses on the ways in which Russian writers incorporate Orthodox icons into their narrative works, effecting a synthesis of the verbal and visual. Recent articles on this topic include “A Haymarket Khozhdenie na osliati: Raskolnikov’s Donkey Walk and the Failures of Iconic Performativity” (The Journal of Icon Studies, 2021) and “From the New Word to the True Word: The Bronze Horseman Subtext of Crime and Punishment” (The Russian Review, 2019). 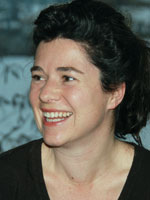