At UVM, she teaches at all levels of German language, as well as numerous courses in German language literature and culture. Her recent course offerings include Fatal Attractions: Love and Death in 18th and 19th Century German Literature, Taking Flight: Tales of Exile and Migration (exploring migratory experiences into and out of Germany) and People of Color in German and Austria (tracing the experiences of Black Germans and Austrians throughout the twentieth century to the present) She also teaches courses in Holocaust Studies (The Legacy of the Holocaust) and the Honors College (The Texture of Memory).

Professor Schreckenberger holds the Wolfgang and Barbara Mieder Green and Gold Professorship. Other awards include grants from the UVM Humanities Center (2014), the Botstiber Institute for Austrian-American Studies (2011), the Lattie F. Coor Faculty Development Award (2011), and a NEH Grant to participate in the Summer Institute at Stanford University (2009).

In 2000/2001 she was selected to attend the HERS Management Institute at Wellesley College. 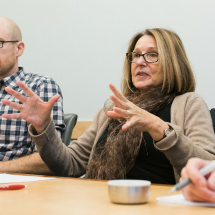